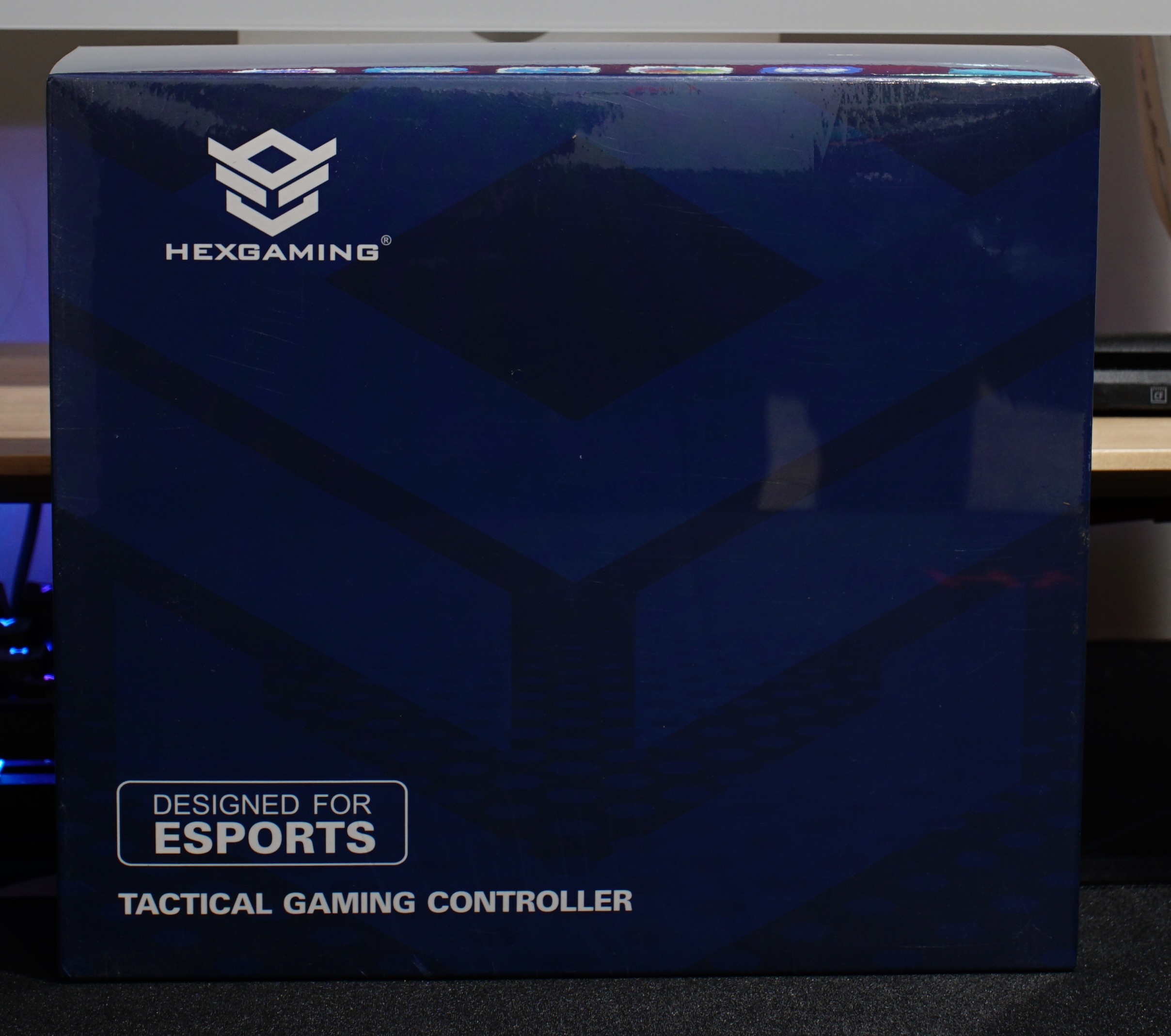 As gaming continues to grow, there is a lot more demand for certain unique and different accessories. Among the most interesting is the concept of a pro controller. Instead of relying on the same controller as everyone else, these controllers would have more buttons, better ergonomics, enhanced parts, and other things that supposedly enhanced the player experience. Among the most recent is HexGaming’s Rival Pro Controller, which is their take on the DualSense. With several features that beat the default DualSense, including improved triggers, more customization, back buttons, and rubberized grips, it makes for a great concept, but does it work in practice?

Since HexGaming makes so many different controller variations, the packaging is rather simple. The box basically just states what it is, in this case, they refer to the Rival Pro controller that we reviewed as a “Tactical Gaming Controller,” with the back explaining the concept behind the product.

Inside is also pretty straightforward. Everything about the controller is securely wrapped to ensure minimal damage on transport. Above it, hidden in a cardboard opening, is a small container that has all your accessories. Finally, there is a small manual and a warranty card.

Before we start talking about the Rival Pro Controller, I want to touch briefly on the actual warranty. Usually, this is not something we highlight, mainly because the vast majority of products we review have a year or more, whereas HexGaming offers a mere 90 days. The warranty above card is an offer to extend this to 180 days if you follow them on social media and share your controller. The other is what the actual warranty covers. There are two things that stand out, which are “consumable parts” (battery, protective coatings, etc) and drift. I highlight these as they’re the most likely problems anyone would face and something you’d expect not to occur within 180 days of purchase anyway. In the event you do have an issue, regardless of what it is, HexGaming suggests you contact them to see what can be done, so at least you’re not up the creek if your controller breaks for any reason.

I was surprised by the quality when looking at the actual controller. First and foremost, the unit we received had its “Marbled Morale” design on it. One of the biggest fears with any controller design is it eventually rubs off in some way. However, these designs are under a nice glossy coating, something I would not expect to show wear anytime in the foreseeable future. The only downside to this finish is that it applies to trackpad designs as well, something that makes it harder to use, in the unlikely event you use it, to begin with. Another notable inclusion is the rubber grips. I’ve seen many Xbox controllers have these eventually rub off due to how they’re connected to the controller, whereas this controller makes the grip part of the back accessory, basically correcting this concern. The buttons on my unit are also more matte, compared to Sony, using a more slick feel, something that makes it a lot easier to press inputs and come out ahead.

Beyond that, this unit uses has four back buttons, which are placed in a way where it was comfortable to hold my controller typically and always had access to two buttons, with the other two being easily accessible by the same finger. Like all pro controllers, I suggest there will be a learning curve, though it was a very natural feel for at least two of the buttons. The model we received also boasted their “FastShots,” which activate the L1/2 and R1/2 buttons as soon as you press them, which is great for shooters and other competitive games. Finally, this model features removable thumbsticks like the Nacon Revolution X Pro we recently reviewed, though unlike that, it was extremely easy to remove and replace them. Not to mention the thumbsticks feel better than the ones found on Sony’s DualSense.

Even though these are Sony’s DualSense pre-modded with ExtremeRate Limited, HexGaming’s parent company, parts, things can be rather bumpy. The unit I received had the capture and options buttons more sunk in and were a lot harder to press compared to my other DualSense controllers. An associate who also had a Rival Pro controller reported similar issues and problems with their FastsShot buttons. From there, I was surprised by the additional container HexGaming included holding accessories. After touching it for a short bit, I had some of the design rubs off onto my thumb, leaving a giant black splotch. For this reason, I would suggest limiting how much you touch it, as the design is not meant to last, unlike that of the controller. Finally, HexGaming offers a different issue with its rubberized grips.

As previously mentioned, the most common issue I saw with these grips on other controllers was them eventually peeling off. In HexGaming’s case, I had them peel, which is what they call it when sweat causes the original color to show through. Usually, I wouldn’t be bothered by this, as some wear and tear are expected, but I had it occur after roughly 30 hours of use. Mind you, this is a high estimate, which was based on my playtime in Thymesia, the only game I played with Rival Pro at that point. I spoke to a representative for HexGaming who claimed the issue was “very rare.” Following that conversation, I checked my other DualSense controllers and found the same approximate spot on both showed wear. I’m guessing this is why the problem didn’t extend to other areas, even after well over 100 hours of use, but something to absolutely keep in mind. Unfortunately, this probably would not work with the warranty, which is partially why I wanted to highlight it earlier, though you can purchase a replacement from ExtremeRate Limited. Just keep in mind the MSRP is $29.99.

Usage and function are going to depend on what and how you play. While FastShots help in any shooter or action game where trigger buttons are used extensively, this feature also removes Adaptive Triggers. This is probably the most prominent feature on the DualSense, so seeing it removed is rather unfortunate. This is also a feature Sony noted their upcoming Pro controller, DualSense Edge, will continue to support despite having adjustable trigger travel distance.

Now, I would say the thumbsticks are a significant improvement and help make sure you make every shot. I wouldn’t say it was made or broken in Back 4 Blood or Destiny 2, though it helped my PVP performance. Enough to notice the difference, just don’t expect the world from it. That said, you can get much more out of it if you master the back buttons.

I would say RISE4, the name of the back button module, is in a peculiar place. Unlike many of these controllers, there is no software to set it up. This makes using it incredibly intuitive, as you simply hold down the program button and then the button and place you want to link them, though it misses out on some of the deeper functions. The other, arguably massive, the shortcoming is the lack of profiles.

HexGaming gives players a single profile to work with. This doesn’t sound too bad in the grand scheme, as many games use standardized commands, such as L3, to run, though there are exceptions. This goes back to what and how you play.

While I would Back 4 Blood features a more common button arrangement, Destiny 2 is somewhat atypical. This can be resolved by changing the default button arrangement or constantly changing the back button inputs. This is the same fundamental dilemma for every game. You can, hopefully, change the in-game controls to always match how the controller is arranged, or you can constantly swap inputs between games. The only exception is going to be games that are different enough. Something like Godfall, which uses multiple melee attacks, will need additional considerations compared to an FPS.

This is what makes the additional profiles so worthwhile. On Nacon’s Revolution X Pro, it’s a simple click of a button on the back, and there can be a Destiny 2, Back 4 Blood, Elden Ring, or whatever profile programmed and ready for you. Similar brands like Scuf offer three with their PlayStation 5 line, so it’s a feature other companies have that is not featured here.

Finally, if you’re anything like me, you like to keep your controllers on a charging station when not in use. Due to the position and size of the RISE4 unit, this is simply not possible. It might be, depending on how you modify something, play the ChargePlay, but neither the default HyperX or Sony charge stations will work with this outside of the box. This is also why it did not fit Nacon’s carrying case, though I can confirm it fits in Otterbox’s Gaming Carry.

The Rival Pro Controller is in a peculiar spot. If you look at it as a dedicated pro controller for FPS games or similar activities, it’s a pretty strong contender. It should function like Sony’s DualSense, with more options, faster triggers, additional color options, and better grips. However, I think it falls short if you look at the whole package. Seeing noticeable wear after roughly a few days to a week of use is a relatively substantial red flag, one I don’t consider picking the black color back will resolve. From there, opting for FastShot buttons took away one of the best PlayStation 5 features, which left me underwhelmed.

Along with some buttons not working as well as a regular controller is unfortunate to say the least. This, along with some other notable shortcomings like the lack of profiles, no elegant way to keep track of your accessories, and limited warranty to even being unable to use a charge station, makes Rival Pro a hard recommendation. Especially when Scuf might suffer from many of the duplicate negatives, though it boasts a few more positives and is only a marginal amount more.

FastShot triggers can be the difference between life and death

Faceplate design feels like it's going to last a long time

Peeling had noticeable wear within days of use

Does not support multiple profiles

FastShots come at the expense of Adaptive Triggers

Easy to lose the thumbstick box

Does not work with most, if not all, charge stations

Trackpad designs make the surface slick and even harder to use

Short warranty that does not include drift or battery wear, cosmetic damage, unless the fault was due to their materials or workmanship

Voice of Cards: The Beasts of Burden Review