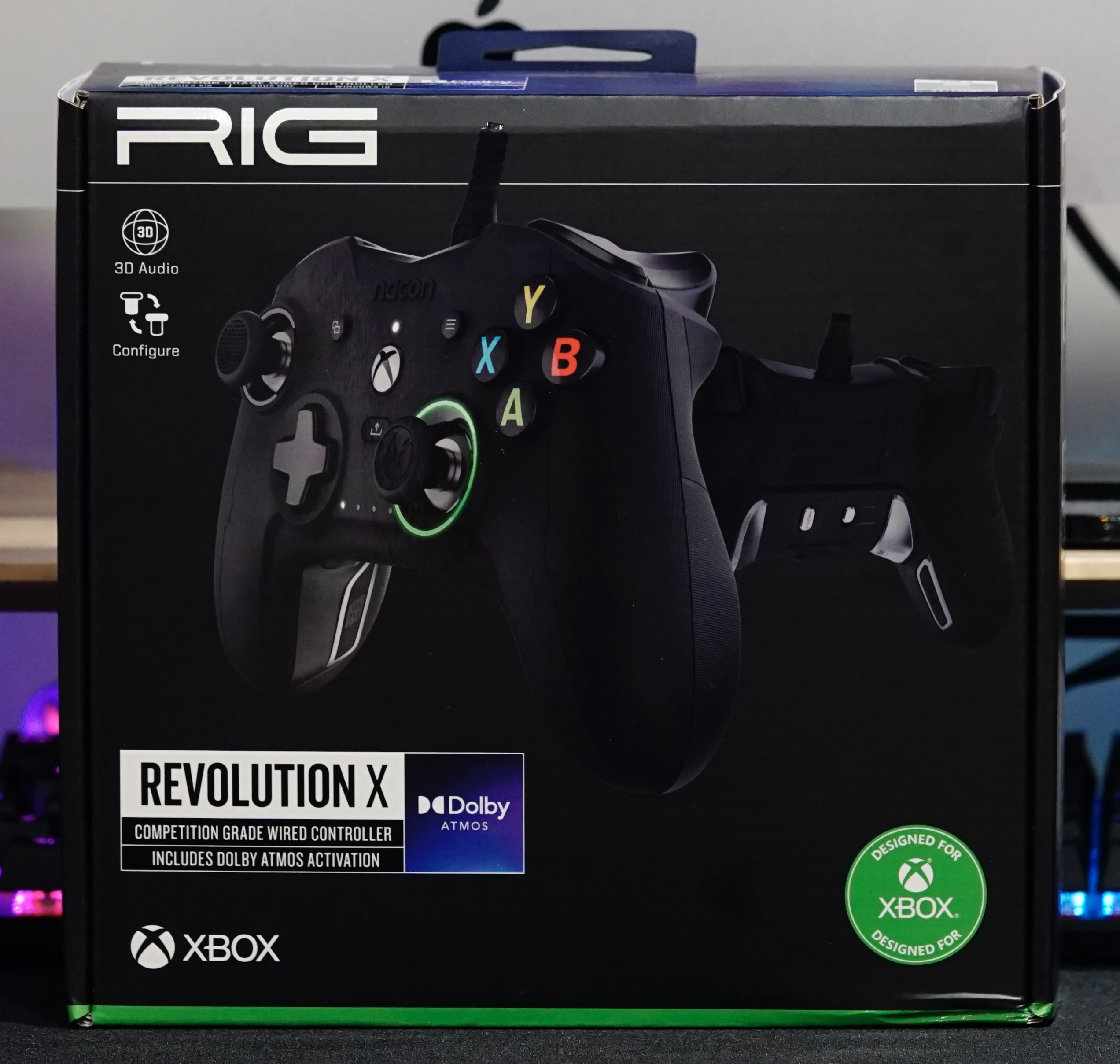 When I worked for Best Buy it was extremely common to hear complaints about Microsoft’s Xbox Elite controller. There were a lot of players who loved the idea of extra buttons, better grips, and an improved experience, though it simply wasn’t reliable. The second generation seems to improve on that image, but even now it’s a common complaint in customer reviews and in what players are saying. For this reason, players are looking at other options and various brands, like Nacon deciding to step up and offer their take on the pro controller concept. With their latest version, the Nacon Revolution X Pro Controller, they provide an impressive number of features at an equally reasonable price. However, with a controller being so crucial to the gameplay experience, is it a winner, or does it fall short in its own ways?

Similar to their RIG Headset line of products, Revolution X Pro’s packaging tries to convey as much information as possible. In some ways, this can be a bit overwhelming like the side mentions the exact degree of all three different controller angle adapters, though it’s also nice to have a clear idea of what exactly you’re buying. There are no questions left as to what is included, clear pictures of everything, and just a lot of simple images. The inside takes a similar approach.

Like many pro controllers, Revolution X Pro includes a case, which is found immediately after opening the box with all the accessories neatly arranged inside. These include the case itself, black or white controller, cleaning cloth, 10′ braided black USB-A to USB-C cable, and on the bottom, the various weights, angle adapters, and alternate thumbsticks neatly stored in a little container. The presentation is excellent, and best of all; it’s designed to keep all your accessories safe and secure. Before talking about that, let’s take a step back and talk about the case.

Nacon included a pretty lovely EVA foam case with this controller. The EVA case features fabric wrapped around the protective EVA foam that is designed to fit around Revolution X Pro. Since this is an Xbox product, the zipper features a lovely neon green on-black design that is extremely easy to zip or unzip. I actually own one other controller case, Otterbox‘s Gaming Travel Case, which has some advantages in regards to protection, but outside of the cable opening, falls behind in terms of function. It’s hard to unzip, along with being significantly more prominent, making this case feel far more helpful for more travel situations. Finally, for anyone curious, I could fit a DualShock 4, DualSense, Nintendo Switch Pro Controller, Stadia Controller, BigBig Won’s RAINBOW controller, and regular Xbox controller in both cases and close it, so this provides benefits beyond the intended use case. Some controllers, such as Hex Gaming’s Rival Pro, will not fit.

A Clear Look at Every Accessory

As for accessories, everything is simple and easy to understand. There are three weights included, each with a slot in the container below, allowing for 16 different combinations. These include a standard controller weight of 260g, with weights adding another 10g, 14g, or 16g. These are all clearly labeled on one side and can freely be inserted into the back of the controller’s grip. They can also be mixed and matched to achieve your desired weight. Below are the various angle adapters that just go around the thumbstick. Similar to the weights, they allow for the default 44, 38, and 30-degree angles. On both sides are also alternate tops for the thumbsticks. Initially, convex, like the Xbox controller, is installed, with optional concave included in the accessory box.

The controller itself is unsurprisingly similar to Xbox’s default controller. It’s slightly more prominent, making it easier to play if you have more extensive hands, with some minor tweaks I prefer. These include a textured pattern on the face and side that you’ll feel when holding Revolution X Pro, along with flatter and less pronounced triggers. Some of the more significant differences are the buttons and d-pad. On Revolution X Pro, the XYBA buttons are matte instead of glossy plastic, with a more traditional d-pad than Xbox’s circular one. I prefer the classic d-pad, though you can make a strong case for the other in certain situations, and unfortunately, it can not be changed. The last difference is the thumbsticks, which lack the ridge found on the Xbox controllers and feel much smoother to the touch. There are some disadvantages with Revolution X Pro, like it lacks an expansion port, though includes 3.5″, and if you’re unaware, it is a wired controller to deliver a more responsive experience. It also offers four additional buttons on the back and various profiles to get the ideal gaming experience.

Looks Good in Black or White

With Revolution X Pro, we were lucky enough to have access to both a black and white unit, so I wanted to briefly touch on both colors. While I typically recommend avoiding white since it makes dirt and other imperfections more noticeable, I do think it looks nicer than black in person. The silverback buttons and black details make for an interesting contrast, with the illuminated ring making for a sharper contrast on white. That said, black is a little less showy and will likely resonate with those looking for something more understated.

After using Revolution X Pro for a bit, I noticed my performance improved. Even swapping between the default Xbox controller and Revolution X Pro, I found the better shape and changes in thumbsticks made it easier to perform a wide variety of tasks. This makes it worthwhile, with further gains coming from the additional buttons on the bottom/back. Full disclosure, I never really mastered them, and there will be a learning curve, though the placement was good for my middle and third fingers. It’s about learning when to push them and what you want them to do. Thankfully, there are various profiles, and each can be set to whatever is essential to you.

The App Has a Lot of Options

Nacon makes editing the controller relatively simple, assuming you have a Windows computer. Simply download the app, install it and then plug the controller in. This will unlock the menu and allow you to remap the controller and update it.

One thing that surprised me was the number of options Nacon gives. Players can have four profiles on the controller at any given time, with the defaults being Nacon’s racing/sports, FPS, fighting, and “infiltration.” Each can be edited, or players can make their custom profile with a name of up to 40 characters. Every button, including the four additional ones, can be mapped to whatever action the controller can do or disabled outright. It’s suitable for situations where you might only need specific inputs and is afraid you’ll hit the wrong button. Beyond that, there are five different response curves for each thumbstick, four profiles for custom trigger sensitivity, five good equalization options, various vibration levels, auto inverted sticks, eight or four-way d-pad recognition, and even lighting options.

I usually wouldn’t do a deep dive into the lighting options, but Nacon went in an exciting direction. The ring around the right thumbstick is illuminated only on the controller. Initially, that color is green, and each default profile has its color. There are a total of 21 color options, with the most exciting thing being the controller has four distinct zones. Each of these can be their color, so purple, blue, red, and yellow can be displayed at the same time or two on each side or whatever. It also supports brightness levels, a pulsing effect (color does not change), cycle (it illuminates spot one, goes clockwise, and then removes the light in the same clockwise pattern), and prism (it pulses through the rainbow). The nice thing is the level of personalization and the ability to immediately recognize any given profile by color alone. I might use yellow for Destiny to indicate light, and red for fighting because it’s intense, and you get the idea. There are also three speeds, with three being about what you’d expect, and one takes a pretty sizable amount of time to do anything. And best of all, the application will hold additional profiles beyond four; they just need to be swapped out through the application.

That said, this program is rather annoying to use. For whatever reason, gaming programs tend to be hit/miss; in this case, the problems are primarily self-created. Instead of giving players complete control over the controller through the application, various options require input from the controller. For example, I can’t exit a custom profile without pushing X on the controller. I’ve also had issues getting the controller to consistently control it, closing the app, and then continuing forward. Thankfully, I don’t anticipate many using the program often, though these choices could quickly be resolved by making the buttons clickable. I also found the glitches commonly occur on new profiles over editing old ones, though you’ll almost certainly experience it.

This is also far from the only issue with Revolution X Pro. Removing the thumbstick tops is surprisingly tricky. Speaking for my controllers, the bottom one comes off with moderate force, whereas the top one requires a substantial amount more. It gets better the more you do it, and I think after about ten successful attempts, I removed the top one with noticeably less force; it just makes the initial swaps kind of hard. Especially since they’re easy to lose, making one mistake, either a controller crash or a flying disc.

Finally, while Nacon included Dolby Atmos with Revolution X Pro, the subscription is through the controller. This can be a good or bad thing, given your specific situation. On the one hand, it’s a permanent subscription not tied to any particular account or system. So you can freely use it on both PC and Xbox on any account you want, but it does mean you will not get this benefit without the controller.

Overall, this is a pretty awesome controller for the price. As long as you’re okay with it being wired, I would say it’s well worth the extra couple of bucks over the default Xbox controller. Not only are the thumbsticks much better, but it also’s versatile, come with a handy case, work better for sure hands, has back buttons, and have a good amount of customization. I would like to see the user app be a bit more friendly, but outside of this, there aren’t many shortcomings, making it an easy suggestion for anyone looking to get more without going crazy.

Additional buttons are in a pretty natural spot

The app has almost an overwhelming amount of options

Some controller modifications people might want are not present

App can be really annoying to use

This is a wired controller, which is great for pros, but something to keep in mind

Nintendo Direct and Sony State of Play Set for Tomorrow