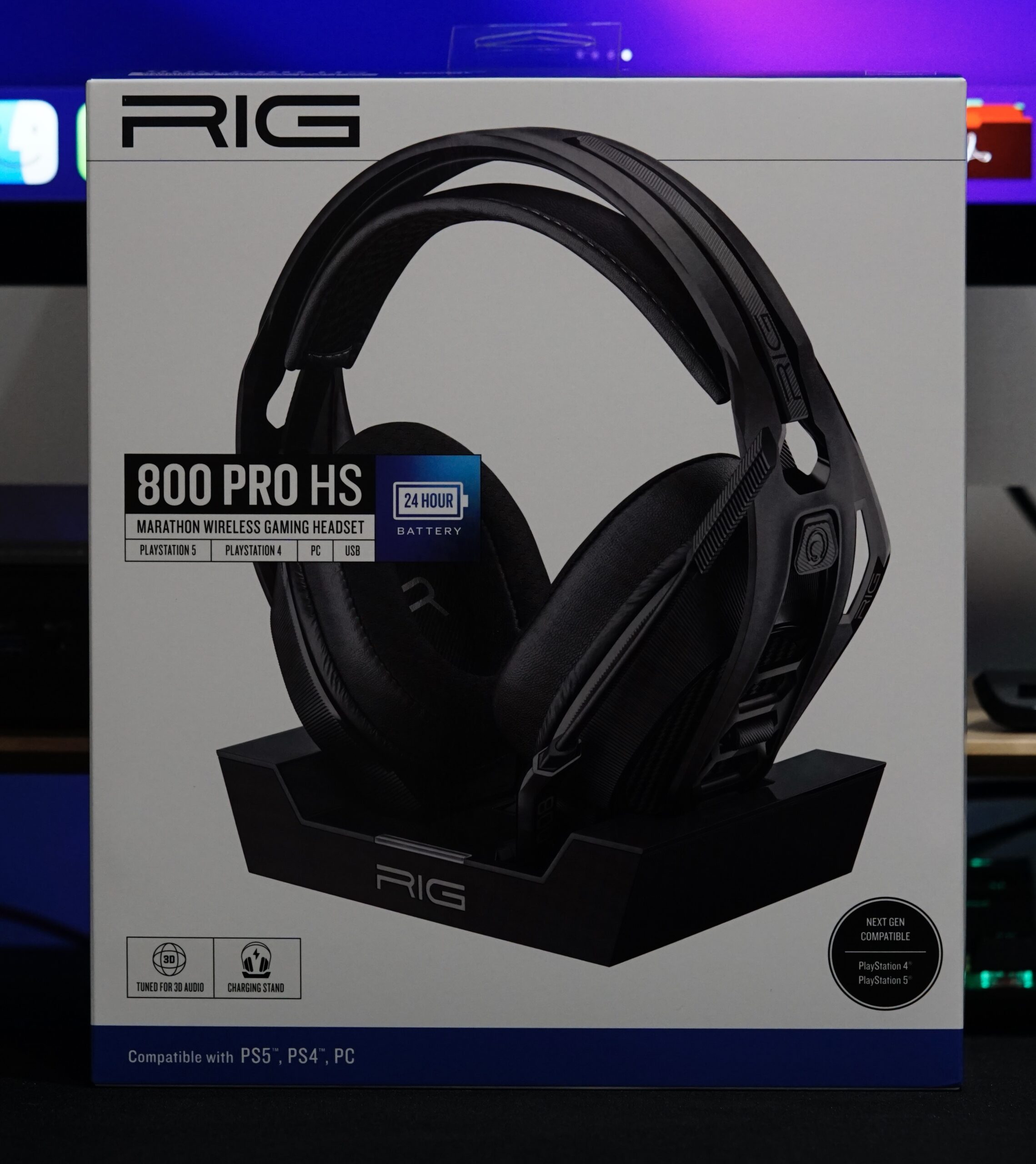 There are a lot of things to look for when buying a headset. There is compatibility, wired and/or wireless, comfort, features, look and even type. One of my favorite headsets is Astro Gaming’s A50. What makes it stand out is the base station, which has all the information you could possibly want, and doubles as a way to charge the headset. It makes for a solid option, but the $300 price point will naturally turn some people away. When I saw RIG update their popular 800 series of headsets to include a base station, I was excited to see how it would stack up against the competition. Having used 800 PRO-HS for a bit, does it stand up against the competition or is it a gimmick to sell an otherwise underwhelming headset?

RIG went in an interesting direction with the packaging. Unlike a lot of the products I review, 800 PRO-HS is clearly designed with retail in mind. The simple white and blue design immediately indicates it’s a PlayStation headset, with the Xbox model, 800 PRO HX, featuring a less prominent green and white theme. What makes this more of a retail product is the amount of information and factoids across the various sides. These include repeated mentions of the solid 24 hours of battery life, compatibility, and the back detailing practically every notable aspect of the headset. One notable touch is clearly mentioning and showing the two stand-out features, the base station, and removable USB adapter.

Inside is nothing too crazy. There is a cardboard holder for the headset and another area below that contains the base station and accessories. It shouldn’t take long to take apart, though it can be a little tricky to get it all back together. Inside you’ll find the headset, base station, wires, and some stickers.

Upon taking 800 PRO-HS out of the box, I was surprised it lived up to the claim of being “ultra-light.” At 290g, it easily beats out A50’s 380g, Audeze Penrose‘s 320g, and even Epos H3Pro Hybrid‘s 308g. Despite the lightweight design, they’re pretty durable. I had no issue twisting the two sides without breaking or noticeable wear, suggesting they should last in most reasonable situations.

As for construction, it’s mostly a plastic headset with some nicer touches at key points. These include rubber reinforcing the headband and at most key connection areas. The part of the headband that will be in contact with your head is a breathable mesh, with a leather top. The ear pads feature a similar design to improve breathability. Both areas are not the most padded I’ve seen, though after a couple of hour gaming session it didn’t make much of a difference in terms of comfort.

On the outside, there are three areas to adjust the ear cup placement. Speaking for myself, the default middle location worked fine, though this could potentially pose a problem for atypical sizes. Under the connector is a nice carbon fiber design, which looks to be a 2×2 Twill Weave pattern. Finally, the left side contains all the fun features, including mic monitoring volume, power, the actual volume, charging port, and microphone.

A Brief Look at the Included Base Station

As for the base station, it’s incredibly straightforward. On the front, there is a single light to indicate charging, with the back sporting the dated micro-USB connection. Unfortunately, 800 PRO HS uses that to charge as well, something that might be disappointing in the unlikely event you charge it without the base station. Finally, the top features a slot for a rather long USB dongle and the headset to sit. There is a decent amount of magnetism, enough that the headset shouldn’t get knocked over from a strong gust of wind or a slight push.

Set up is incredibly simple. Just plugging it into my PlayStation 5 or PC and turning it on got it working. One massive plus for 800 PRO-HS is the aforementioned dongle. While you can leave it in the base station and just connect the base station itself to your gaming device, it can also be removed to use on a different device. This is helpful for those times people want to talk on Discord and I don’t want to change my setup to accommodate it. Though it can also be used to go to friends, in a public setting, or just use it on a different device in another room. The only thing to note is removing the dongle can be somewhat tricky and requires some effort to remove. Not enough to make it too frustrating to use, but enough to make it notable.

One unexpected feature is how 800 PRO-HS interacts with PlayStation 5 when it’s connected with the base station. Unlike most headsets, it only connects with the system when the headset is removed from the base station. This is different from even A50, with the only headset to do something similar being Penrose. I like this because it’s an easy way to control the sound output without messing with settings or forgetting that you need to do it.

In terms of performance, 800 PRO HS actually did fairly well. While it isn’t the loudest wireless headset out there, it can put out a good amount of power and is tuned fairly well for general use. I used it for all my Duality runs in Destiny 2 and I didn’t have any issues clearing that or any of the other new content added this season. With Teenage Mutant Ninja Turtles: Shredder’s Revenge it offered a solid take on the ’80s opening and the actual joys of the game itself. Even during something a bit different like Evil Dead: The Game it was fine for hearing audio cues or enjoying the cheesy dialogue.

The real downside is going to be specific use cases. A50, like a lot of headsets, have different profiles and the ability to customize them, making it a lot more versatile. Next to a more audio-focused headset, it also falls short of displaying the full range of sound. It will do the general idea no problem, though anyone looking to hear every detail will likely need to step up to a higher-end headset.

Similar things apply to the microphone as well. It captured my general voice without issue and no one will likely complain when you’re using it, though it isn’t the clearest gaming headset microphone out there. I also found it isn’t the most sensitive capture, meaning you’ll likely need to work on finding the right balance so your voice doesn’t get lost in the background.

Similar to A50, I got a great range out of 800 PRO-HS. I can go anywhere in my main area without a disconnection, with a small amount of the upstairs area as well. This is enough to do laundry or let out my dog without missing a beat, but not enough to do whatever I want upstairs without having an issue.

A Better Look at the Carbon Fiber Design

Comfort will also vary on the user and their situation. As previously mentioned, it’s not the most padded headset, though it makes up for this by being lightweight. I generally faced no noticeable comfort issues, but I would estimate someone sensitive to these things might prefer something with a bit more padding and versatility on-ear and head positioning.

Where 800 PRO HS really starts to fall behind are some of the nicer features. While it’s great that 800 PRO-HS can deliver full sound quality without an optical connection, said connections give A50 a lot more versatility. The base station also feels more like a full experience, as I can look at it and gauge my headset battery life, sound profile, and more. In addition to that, 800 PRO-HS lacks chat mixing on PlayStation (HX supports it in place of the mic monitoring scroll wheel), plus some smaller things like auto standby (it does automatically turn off over time), the ability to remove the microphone, wired (3.5/AUX) compatibility and things of the like. In fact, the most notable odd quirk is how the base station is positioned. Instead of having an orientation that matches how it’s used, so the headset would be placed in on the left side, it actually needs to be flipped to the right and then flipped again when you want to actually wear the headset. It’s a small, but slightly annoying detail that has resulted in me incorrectly placing the headset in the dock more than once.

It’s rare that we give an editors’ choice award to a tech product in this range, but it seems fitting in the case of RIG 800 PRO-HS. Despite falling short in some of the finer details, the docking station and the versatility it offers are immense. Simply having a USB dongle that can connect to a different device without unplugging the station itself is a massive win for anyone who plays on multiple different platforms. This, coupled with the strong battery life and affordable price point makes it a stand-out choice at that level and slightly above.

[Editor’s Note: Nacon RIG 800 PRO HS was provided to us for review purposes.]

Base Station is really helpful

Removable dongle is an amazing feature

Good sound for the price

Durable construction, perfect for users who are rough with their electronics

Design won't appeal to everyone

Not the most padded headset on the market

Lacks some common features found on other headsets

No chat mix on PlayStation

Microphone is not removable