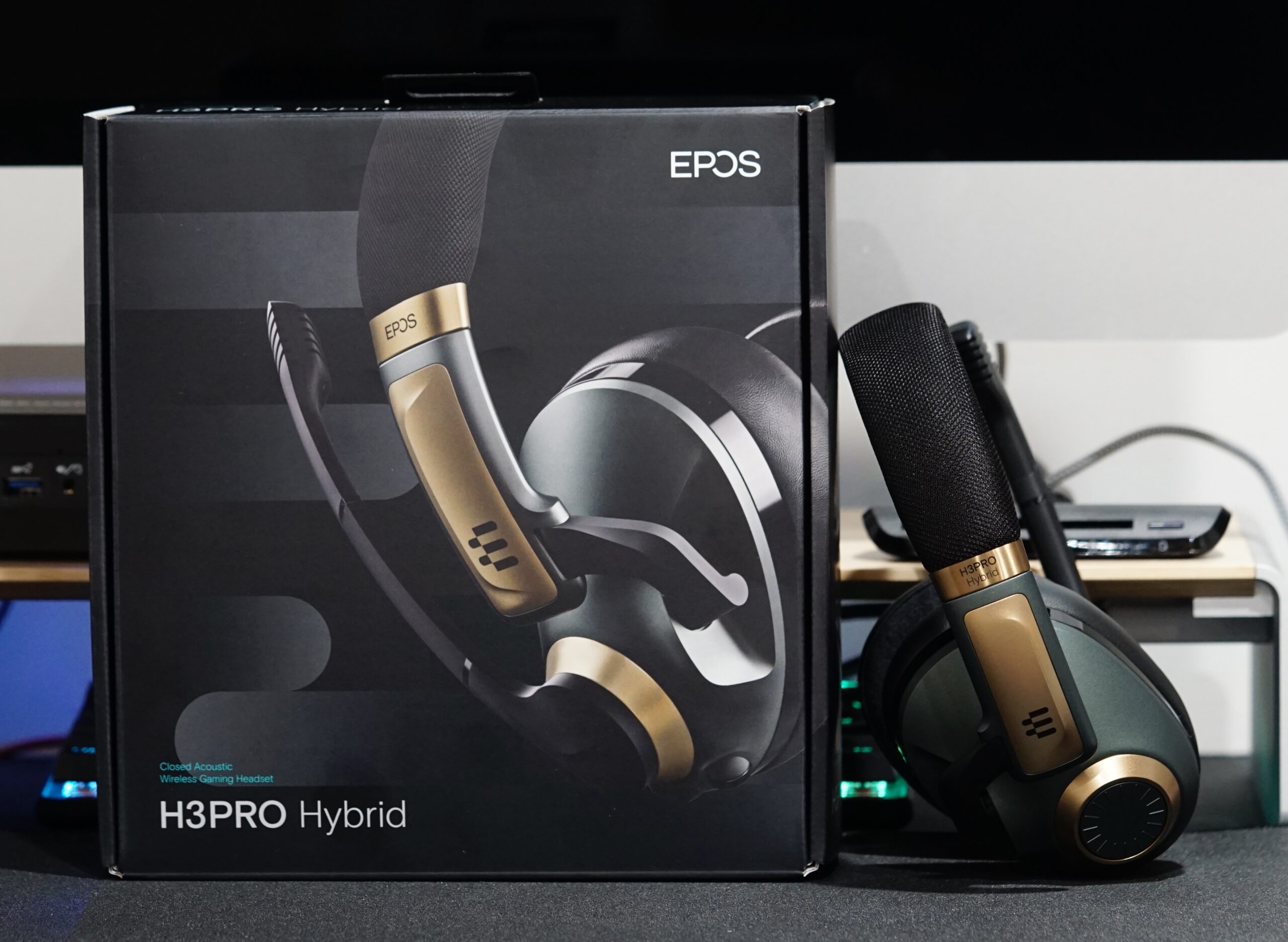 One thing I appreciate about EPOS is they stay true to its mission statement. This is reflected in how their products are made even in the packaging. With the move to their H3 series of products, we’ve seen a nice take on Bluetooth and gaming, along with an affordable open-back option. Now that H3PRO Hybrid is available, we can experience their take on the ever-popular wireless style of the headset. With so many big names and important features, does EPOS keep up with the market or does it fall short of expectations?

Unsurprisingly, EPOS continues with the same type of packaging found on their other H3 headsets. The front shows the product with the EPOS logo in the background, one side is the rest of the headset, another a brief explanation of the product, with some key wireless features on the back.

Inside is enough foam to hold H3PRO Hybrid in place, along with the usual box below with all the accessories. This package, but that it’s a wireless headset, includes a couple of extra items. In addition to the usual braided 2.5mm to 3.5mm TRRS cable, there is a non-braided USB-A to USB-C cable, USB-A wireless dongle, magnetic port cover, and a non-braided USB-A extension cable. It’s a pretty complete package, allowing players a wide variety of options.

With this review, we were lucky enough to check out there Racing Green color. It’s among the more “fun” colors they offer, similar to my old Navy/Orange GSP602. Before receiving I affectionally called it the “Master Chief” headset, which honestly isn’t far off from how it looks in person. Unlike Sebring Black, another one of the colors offered, honestly looks more like a Navy or Dark Blue.

Similar to H6PRO, EPOS included the nice woven headband that feels nice to the touch. On the bottom is soft leather, held together by a metal headband and thick metal connector. As expected, adjusting H3PRO Hybrid reveals a handy measurement so you can effortlessly make both sides symmetrical, though unfortunately, the band is silver instead of matching gold with the accents. Normally this wouldn’t stand out, except it was one of the nicer touches present on the Sebring Black H6PRO we reviewed. Both earpads are plush, with leather on the outside and a suede material on the inside. Beyond that, EPOS kept it simple by only including a volume wheel, power button, Bluetooth, and ANC toggle, along with a USB-C and 2.5mm connection.

Like H3 Hybrid and H6PRO, the microphone connected to the headset is through magnets. It’s a great solution to the microphone problem, along with being an extremely easy way to convert H3PRO Hybrid to your needs. Want to take these on the go, just pull and it’s off in seconds and when it’s time to talk to your friends, get it in the general location and it does the rest.

Performance depends heavily on what you expect from H3PRO Hybrid. The sound profile remains similar to their other headsets, one that is more level than you commonly see. As a result, the lows are not as distinct as certain options and puts it closer to Audeze’s Penrose in more ways than one. I personally prefer this type of sound, as it makes the range stand out a bit more and allows games to feel a bit more expansive. Be it hearing the subtle audio cue or just getting a more realistic feel of the world.

This can be heard with the howl of the wind as the Tree Sentinel patrols around you in Elden Ring or hearing Ridden before they attack during an intense firefight in Back 4 Blood. Even in the ever-popular Destiny 2 it makes things easier to hear, be it the Drifter’s snarky comments as you fight against an invader or hearing the full terror of Rhulk’s fury.

Music will likely result in similar findings. When testing my usual range of songs, H3PRO Hybrid did well with vocals or songs with more range. With some, the bass can feel more subdued or lacking in impact. Among the songs I typically play is Regulate, which has a good amount of bass in the background. On a lot of headsets, it can be overwhelming, something people do commonly like, with it lacking impact on H3PRO Hybrid. Naturally, if you don’t like this profile there is always the software to help it change to what works best for you.

Another similarity with Penrose is connection issues with the dongle. This was something I anticipated, given the inclusion of the USB-A extension cable wouldn’t otherwise make sense, though it’s unfortunate. Not only is it present, but it’s also shockingly apparent. With Penrose, it wasn’t immediate and in some cases had to try to trigger it, but with H3PRO Hybrid it honestly would disconnect the second the headset was not visible, even if I was less than four feet from it the dock behind my television. It would also connect and firmly hold a connection whenever the two remained in sight. Due to the USB-A extension cable, it does offer some ways to keep it hidden and it’s among the smallest headset dongles I’ve seen.

Update: After publishing firmware released that improved the dongle audio experience. I reran the aforementioned tests and got better overall results, but similar shortcomings to Penrose like previously stated. I found the dongle works better in more open areas, like the front of my PS5 console or GEEKOM Mini IT8. When connected there I was able to get good range, allowing me to potentially go to my upstairs kitchen for a drink, let the dog out or deal with my washing machine without interruption.

When connected to the back of my PS5 via the dock or Mini IT8, there were connection issues. It wasn’t as absolute as previously stated, but I would lose connection the second I left this room on Mini IT8 and within 10 to 20 seconds with the dock. Interestingly, issues did not occur when connected on the back of my iMac or the USB-C port on Mini IT8, though both also offered diminished range compared to the front facing port. In most cases I would guess this won’t cause any noticeable issues, just something to keep in mind if you have a more unusual set up like myself.

Thankfully, Bluetooth remains as strong as ever. I had no issue maintaining connection anywhere in my house or in the parking lot. This is about what you’d expect from a newer headset and a good alternative if you need/want that extra range or a specific look.

How H3PRO Hybrid Looks With the Mic Off and Cover On

Microphone quality remains a solid point for EPOS. During my time testing it, I did my usual online tasks, with players saying it was a clear sound. My friend who completed Back 4 Blood with me actually preferred it to the usual Astro A50. Even recordings with it were solid for a gaming headset.

Despite looking and sounding good, H3PRO Hybrid falls short on some of the finer points similar products offer. For example, ANC is featured on this headset and works fairly well to block out background noises like my frequently mentioned air multiplier. Where it falls short are things like battery conservation. A lot of headsets will time out or even go into a standby mode when they’re in a certain position, though not H3PRO Hybrid. It’s something you need to be conscious of, otherwise, your next gaming session will either be with a dead headset or cut painfully short.

EPOS H3PRO Hybrid is a good headset that falls short of being great. Not only is the build quality great, but the sound profile is also quite nice across a wide range of conditions. Dongle placement and some of the quality of life features might make it a hard sell, but if you’re concerned with sound and want the freedom of wireless they perform quite nicely. Especially with some of the nice additions like ANC and magnetic microphone.

[Editor’s Note: EPOS H3PRO Hybrid was provided to us for review purposes.]

Feels nice to the touch

ANC will block out some annoying noise

Good sound for highs or bringing out the full range

Missing some nicer features like auto-off and separate chat volume