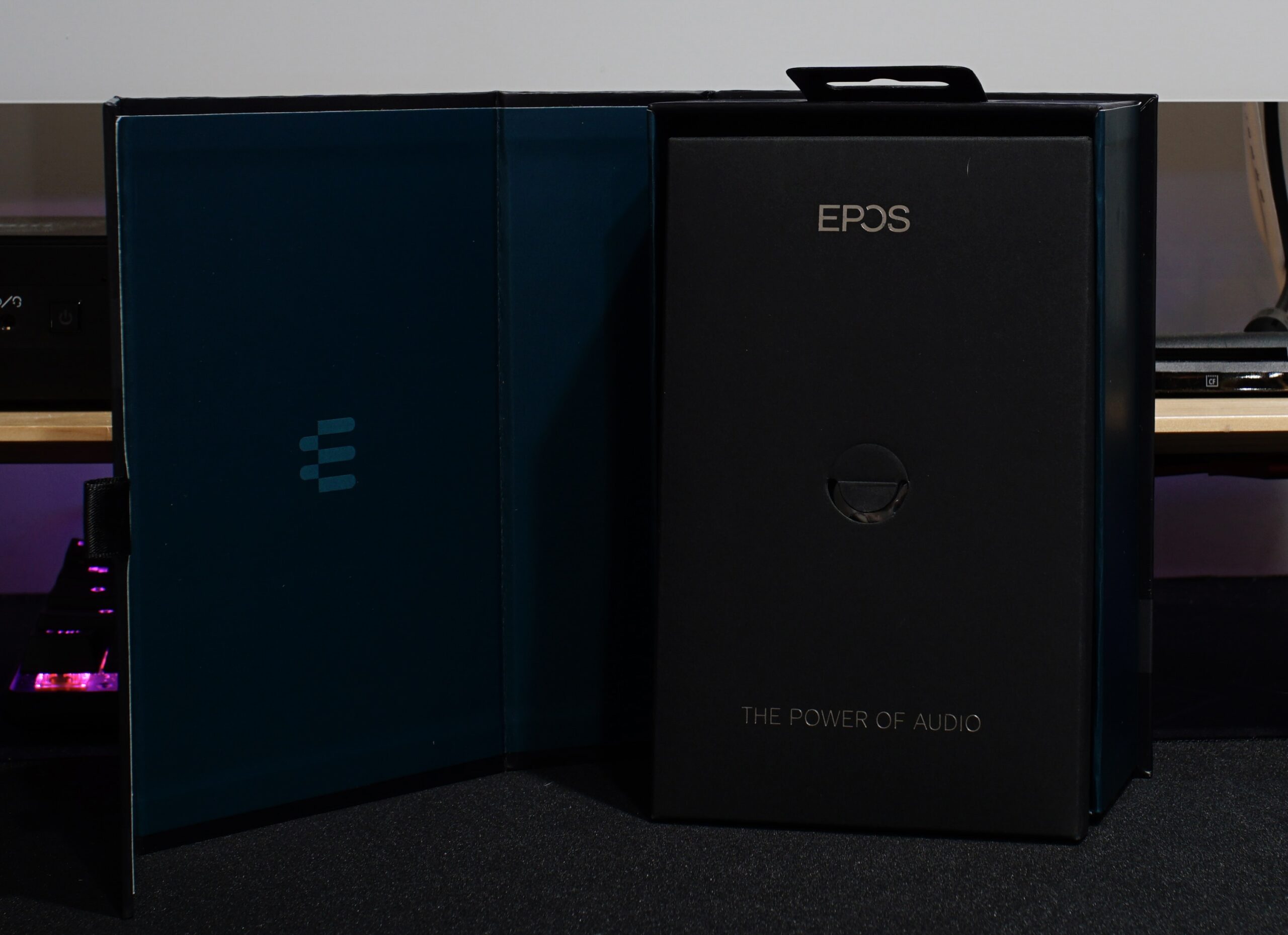 As gaming continues to grow, players seek various products to enhance their experience. For some, that is a headset; for others, a keyboard, maybe an audio interface, with one of the most common being true wireless headphones. Unfortunately, this has been a bumpy road, with some products coming close yet still short of the desired experience. Among them is EPOS GTW 270 Hybrid, their relaunched version that will hopefully give players the desired experience. With plenty of time to improve things and a significant form factor, is it an absolute must, or are they another underwhelming product?

If you’ve read my other EPOS reviews, you’ve undoubtedly seen me highlight their packaging, typically remarking it matches their goal of offering a high-quality and affordable product. GTW 270 Hybrid is no exception, featuring a box similar to their premium USB microphone, B20. On the front is a picture of the buds, with the logo in the background and a simple explanation of what it includes on the back.

After opening the flap, there is a box containing all the accessories, which includes a 6′ or so USB-A to USB-C extension cable, 3′ or so USB-A to USB-C charging cable, the typical small, medium, and large earbud tips, and a silicon holder for the USB-C dongle. The holder features a small hook, making it perfect for hands on a pair of keys or a zipper pull to ensure you always have the dongle. Under that is a small foam pad containing the GTW 270 Hybrid headphones and case. Below is a small container that holds all the documents and manuals to ensure you have an informed experience.

Unlike many true wireless headphones, EPOS used a metal case that makes it stand out. I’ve done a fair number of accurate wireless reviews over the years, and the only other pair I’ve seen with a similar quality case is 1MORE’s ANC model. Even if I prefer EPOS’ space grey color to 1MORE’s chocolate, I wish GTW 270 Hybrid also had a rubber bottom. Instead, it has a metal bottom that causes it to slide around a little more in your pocket or on a desk. Inside, the case looks just as good as the outside. A decent strength magnet prevents the case from opening too quickly, locking into place once the top is open the total amount. Below GTW 270 Hybrid earbuds have excellent presentation, with the top having a thin layer of rubber to prevent the buds from being damaged inside the case.

Most importantly, the earbuds have a minimal design that isn’t particularly noticeable once inserted in your ears. They also feature a tiny plan that, despite looking like a metal plate looking out, is metallic plastic. As for the dongle, it’s a pretty small adapter that is meant to be used with a wide variety of USB-C products or USB-A with an adapter. It can be hard to remove; something EPOS realized and added a slight catch to make it easier to remove with your thumb. All of this makes for an excellent presentation, though it’s pointless if the product isn’t worth using.

Like many players, my first big test for GTW 270 Hybrid was Splatoon 3. After plugging the dongle into the bottom of my Nintendo Switch, they instantly paired, something you can tell by the dongle glowing a lovely purple color. I am happy to report that they maintained a good connection to the system after several hours of combat. I only ran into one bump: GTW 270 Hybrid breaking up when I set my Switch down. After reconnecting the earbuds to the dongle, restarting the system, and trying again, I could not replicate the issue, so if you run into an issue, there seems to be a simple solution.

On my PlayStation 5, I was excited to try this with Metal: Hellsinger. Rhythm games like that can easily make or break a headset, and I am happy to say I was impressed with GTW 270 Hybrid’s performance. While not the most technical test, the image above shows that I got an audio latency score of 0ms using GTW 270 Hybrid. Unfortunately, I confirm any mistakes are my lack of skills with the earbuds. Regarding the actual sound performance, they sounded friendly with the heavy metal sounds of Metal: Hellsinger, and I noticed a slight increase in performance compared to my sound system.

After trying something I was a bit more familiar with, such as Destiny 2, GTW 270 Hybrid still did well. I noticed the sound stage was, unsurprisingly, a bit smaller, and it was harder to make out some of the more delicate tones. This will hurt players looking for more of a competitive edge, but not enough where wearing them would be a negative.

Where I found they performed best was anything with many low solid tones. These would be titles like Metal: Hellsinger, Arcadegeddon, or Taiko no Tatsujin. It was usually titled with many highs or hard-to-hear lows that didn’t perform as well.

When using Bluetooth, I was pleased with the performance. I was able to get the usual whole home connection that I’ve come to expect from a Bluetooth headset from GTW 270 Hybrid, and it was nice just using them for everyday things. For example, I watched the season 3 finale of Harley Quinn and was pleased with the performance and having a couple of chats. The only time an issue arose was when it was taking two audio sources simultaneously, something that can easily be fixed by pushing the earbuds themselves.

Similarly, I was pleased with dongle connectivity as well. After testing GTW 270 Hybrid with my PlayStation 5’s front-facing USB-C connection and the USB hub I keep behind my television, I had minimal issues maintaining a relationship, even when I went into another room or on a different floor. The only thing that did occur was every now, and then it would drop sound for a moment.

Microphone Now Works with the Dongle

Microphone performance is surprisingly good for the size. I had no complaints when talking to others, and the capture was above what I would expect from earbuds. Since GTW 270 Hybrid’s initial release, it was updated to allow voice via the dongle. This means you can use it to chat on PlayStation 5, like pictured above, though I strongly suggest testing it before use. Initially, the sensitivity was a bit intense, to the point where I could hear sounds like scratching my skin. This is a simple process though, something like the PlayStation 5 microphone adjust menu pictured above.

Finally, I wanted to touch briefly on comfort. I don’t usually include this because everyone’s fit is a bit different, but EPOS boasts GTW 270 Hybrid and has a unique ergonomic shape. After wearing them until the battery died, I had no issues with comfort or keeping them in place. They were so secure there was a tight seal that minimized outside noise. A nice feature that I am happy to see.

EPOS did a fantastic job with GTW 270 Hybrid. The high-quality case, a wide array of accessories, and good performance make it the best option for true wireless gaming headphones I’ve seen. Not only are they comfortable and get good battery life, but there are also several connection methods. Sure, there are still a couple of kinks to work out. Still, these are the best true wireless gaming headphones we’ve used and something we’d strongly suggest if you’re looking for that or as an alternative to using a Bluetooth adapter with an existing pair.

Good sound for general use cases

Tight connection that did not cause discomfort

Auto mutes when the earbuds are so far apart

Did not pick up on minor sound cues that well

Only one button to control the various functions

Dongle can be tricky to transport or move