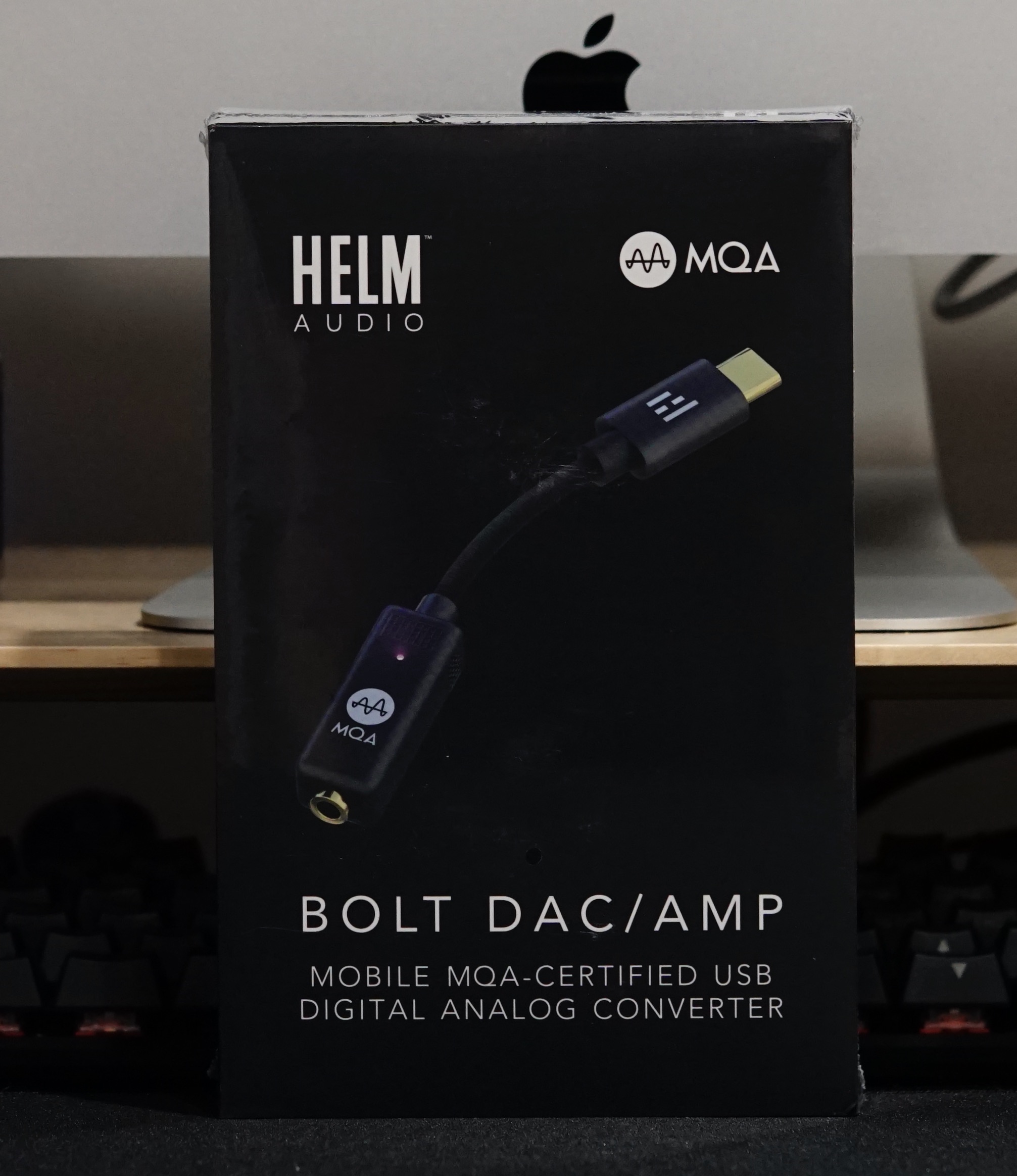 To this day the removal of the 3.5mm connection on phones remains controversial. For many, the move to Bluetooth and true wireless happened ages ago, making the port redundant. Others still use wired headphones for one reason or another, making the removal frustrating. Both Apple and Android devices have options to return the port, but other companies saw it as an opportunity to improve. Among them is HELM Audio, which created Bolt DAC/AMP in hopes of delivering better audio quality though through a more sophisticated adapter. With some bold claims, is it a must-have audio accessory or is it costly snake oil?

Before even opening the box, it’s clear HELM Audio takes their Bolt DAC/AMP quite seriously. The large black box shows an enlarged image of the product, with a simple explanation of what it does. Two of the sides mention HELM Audio’s common “hear what you’ve been missing” tagline, with the bottom having boilerplate information and the top giving a little more insight into the features. On the back is key information about Bolt DAC/AMP, such as it being a THX Certified for ultra-low crosstalk and distortion, sample rates up to 384 kHz, and DSD rates up to 5.6 MHz, along with a brief listing of what is included.

Similar to Apple products or EPOS’ H6PRO, Bolt DAC/AMP features a lift-up box with the product held securely in a bag featured prominently in a cutout featuring the logo. All the accessories are in there, which include the small leather pouch with a snap open/close, a USB-C to USB-A adapter, and Bolt DAC/AMP. The pouch is a nice addition, as there are a fair amount of metal components that could scratch your device, and makes for a secure way to transport an otherwise easy-to-lose device.

At first glance, there really isn’t much to Bolt DAC/AMP. It’s about 2 mm longer than a generic adapter, which brings it to about 3 inches total. At this size, it will easily fit in most headphone cases. The construction is quite nice and features a couple of nice touches. In addition to a well-constructed USB-C port, which will either feature a rubber connection (Gen 1) or metal with the HELM Audio logo (Gen 2), there is an intricately braided cable connecting the two parts. On the other end is a small metal box, with a simple matte coating. On one side is the HELM Audio logo and the other MQA logo with an indicator light to tell you what quality level you’re listening to.

Connecting it to a device is extremely simple. Just plug it in and if it’s supported (Switch, Xbox Series, and PlayStation 4/5 are not), it will work. The only exception is Apple devices with a lightning connection. They will also work, they just require the Lightning to Camera adapter. While this is more how the devices are set up than a Bolt DAC/AMP feature, it will give some users peace of mind.

Performance is surprisingly high given the small size. I tried it with a couple of devices I had laying around, like the GEEKOM Mini IT8, and it consistently offered noticeably better sound quality regardless of genre. How much of a difference will vary, like I noticed less with lower-end headphones than something like my Audeze LCD-1, though there was always something.

The first massive difference is the power difference I got between the two is noticeable. This better drove my headset, resulting in a more impactful sound. On higher quality songs, especially those that support MQA like Tidal offers, there was a lot more fullness to the sound stage. Even on levels below that it helped bring out some of the finer points of each song to deliver a better overall experience.

Even gaming, it makes a noticeable difference in the same way. As a result, the worlds feel a little more alive, certain elements are just a bit more deep, and so forth. This is something really nice about certain set ups like the aforementioned GEEKOM Mini IT8, since it can sit right on your desk with easy access to a USB-C slot.

While nothing will change how someone feels about using a dongle with newer phones and other such devices, it’s good that there are companies trying to make the most of the situation. This makes it a lot easier to rationalize, especially since it is a very versatile device. The only real downside is that it’s very easy to lose items and that might discourage using outside of the house. But even that can be a positive, as it makes a difference without making a difference in the pocket economy.

[Editor’s Note: HELM Audio Bolt DAC/AMP was provided to us for review purposes.]

Simple solution to a common problem

Works on a wide range of devices

Powerful sound in a tiny package

Won't notice as much of a difference with lower quality files