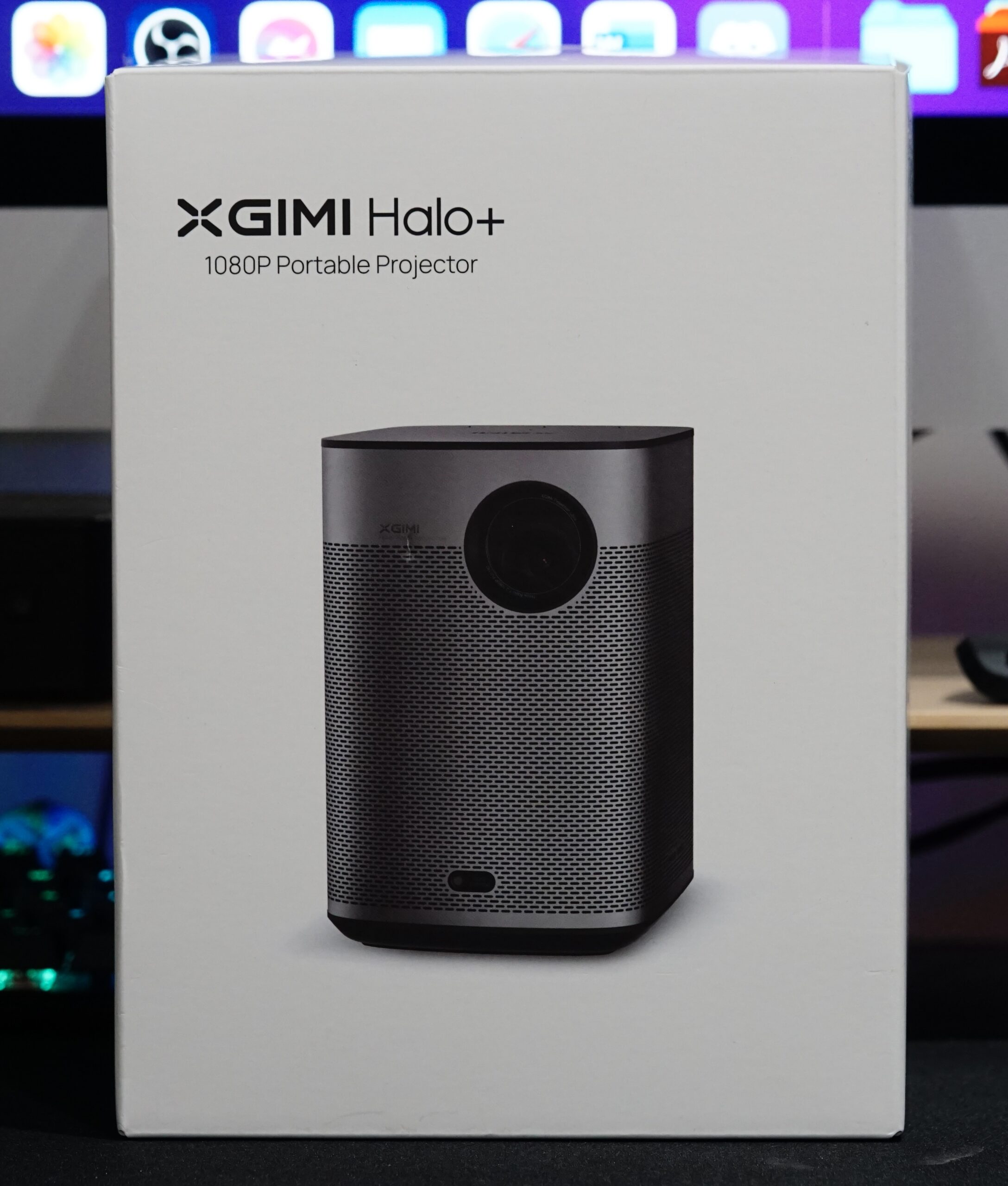 It’s almost hard to believe how much the world has changed in the past couple of years. Conventions and other social gatherings are still uncommon, and places of business are implementing various rules and guidelines, with places like theaters needing all the business they can get. For these reasons and more, there was a fairly substantial boom in the projector interest. Giving people the theater experience at home, along with a safe way to gather, become a highlight in these uncertain times. One of the nicer projectors, XGIMI’s Halo, offered a lot in a small package. With Halo+ they plan on taking things to the next level, but is it enough of an upgrade to matter?

One thing that I love about XGIMI’s packaging is how different it is from traditional projectors. The clean white box and extremely simple images immediately communicate what it is, in a package that feels premium. It leaves a much better impression than some of the more expensive models, which come in a rather bland brown box filled covered with information. Inside is a lot of foam to securely hold Halo+ in place, with the remote, manual, and power block/cable safely held in a box below.

Taking Halo+ outside of the box can be a little difficult. At 3.5 pounds it’s light for a projector, but the compact size can make the initial lift a little difficult. At first glance, XGIMI found a nice balance between a premium look and function. The front-facing and two adjacent sides are covered by a stylish space grey colored aluminum plate. The top is a simple black plastic, with touch-sensitive volume and play/pause buttons. Below is a build-in kickstand, to help the Halo+ projector upward, a rubber base to protect the bottom and a screw that can be used with a standard camera tripod. Just note, due to the size and weight of Halo+, certain tripods will not function correctly with it and could potentially damage both products.

On the back, there is a vent, which can get rather hot, along with the power input, AUX (3.5), one HDMI 2.0, USB 2.0 connection, and finally a power button. Despite the small number of connections, this is actually a rather versatile lineup. While the value of HDMI and even USB 2.0 go without saying, the choice of an AUX connection is quite nice. This makes it extremely easy to connect an external speaker or just listen to wired headphones with a friend without disturbing the neighbors. It’s also, surprisingly, something a lot of companies have recently moved away from, even in the portable space.

Before talking about performance, I want to briefly touch on the remote. With both of the Halo models, XGIMI went in a rather unusual direction with the remote. The volume buttons are on an angle, there is a switch on the bottom for volume/focus and there are a wide variety of colors and icons. Despite being unconventional, a lot of thought went into this remote and that makes it extremely easy to use.

Part of this is due to the way the buttons were designed. Power has a slight slope, input/settings are raised, back/home/Google Assistant/Hamburger button are flat, and directional pad/volume have a slight texture to them. It makes it incredibly easy to know what to push without looking at the remote or being able to see it. The toggle on the bottom is also rather straightforward and often activating it is all you need to do for Halo+ to correct itself.

Turning on Halo+ for the first time will take a little bit of time, around 45 seconds, with a rather simple setup process. Anyone familiar with Android TV (Sony, certain Hisense, TCL, etc) will know exactly what to expect. If not, it’s your standard set up wifi, sign in to your Google account, which apps do you want to download and shouldn’t take more than a couple of minutes.

Once set up it features the modern Android TV look and is surprisingly snappy. On the main page are favorite apps, and dedicated bars for any apps you might want with suggestions/quick links. To the right is a place to discover new things and further down is a general app area. Due to XGIMI using Android TV and the hardware included, it runs almost every popular streaming service. This includes Apple TV, Paramount+, Disney+, Hulu, YouTube TV, Amazon Prime Video, and even some weirder ones like BET+.

The only additional shortcoming not found on the Android TV platform is the inability to use Netflix directly from the device. Even on the latest version of both XGIMI’s software and Netflix’s application, it will load the content, but not play anything. This is due to Halo+ not being a “Netflix certified” product, something that has been true for XGIMI products for years. Now, there are simple fixes, like using any number of other devices that support Netflix, using the built-in Chromecast from your device, another phone, or computer mirroring program and you get the point. Not the largest issue, especially when most projectors lack any smart programs, but something that might be a dealbreaker to some.

The picture quality is pretty good with Halo+. While it won’t beat a home cinema projector, it’s significantly brighter than a lot of similar options. This makes it easier to use outside, in a brighter room, or just get the most out of your picture. This can be further improved with a different screen, as different shades/textures can impact the image displayed, but for many, the default should be more than enough.

That said, I did find the initial settings a little rough. The motion smoothing was a bit on the high side and the colors needed a slight tweak. Both of these things can be altered through a wide variety of settings, different modes, and in the case of motion, disabled completely. Since this is a gaming site, there is a dedicated gaming mode that brings input lag down to 26.5 ms. It isn’t as low as some televisions or monitors, but shouldn’t be a problem for most games and the vast majority of situations.

One huge positive is Halo+’s ability to work across a wide variety of situations. Classic episodes of Seinfeld looked great, The Boys is delightful and even Super Smash Bros. or Destiny 2 looked great. I would go so far as to say it beats or at least matches a similarly priced 75″, with the benefit of portability and even larger sizes than that. The only places where it starts to falter are situations with extremes. If a scene is contrasted heavy, like those infamous Game of Thrones battles, or something extremely bright it will fall short, but for most situations, it’s more than a suitable replacement for television.

Speaking of which, another massive benefit to Halo+ is the built-in Harmon Kardon speakers. While not as good as an external speaker, it easily performs as well as TV speakers. Even when you have it placed to a side it does well at compensating. It also works well as a Bluetooth speaker, making it easy to go from party watching to just party music. And, best of all, if you find you need more there is the AUX connection, HDMI soundbars/receivers, and even the ability to use a different Bluetooth speaker to improve the experience.

Differences Between Halo and Halo+

Up to this point essentially everything I’ve said could apply to either projector. This is really a testament to the work XGIMI put into the original Halo, making it rather hard to improve on. This is also what I love about the improvements XGIMI added to Halo+.

In addition to small tweaks, like Halo+ is slightly brighter at 900 lumens instead of 800, improved processing, and things like that, it improves the experience outright. This is done through a couple of minor differences that I think alone make Halo+ a clear winner.

What to Expect from Auto Keystone Correction

The first is how Halo+ handles Keystone Correction and focusing. While Keystone Correction is a great feature, one that allows the picture to display correctly within a confined space like a screen, manually doing it is extremely time-consuming. Even if it can be done in a couple of minutes, this is a couple of minutes each and every time the projector is taken into another room or simply moved. With auto Keystone Correction there is a simple button that you can push and Halo+ does it in seconds. It also automatically corrects when the device is moved, ensuring you get the right picture each and every time. And, most importantly, it’s a feature that legitimately works as intended. The only exception I found was aboard my mom has that has a fleece-like texture over it. Outside of that, my screens, the wall, and even a standard sheet worked without a hitch.

The other feature is the quick boot. Instead of turning the projector off outright, it can be sent into a hibernation mode. When enabled, it can power on and be usable in about 10 seconds. A huge advantage if you want to do something spur of the moment and don’t want a long setup or just keep it in a fixed spot.

These features, along with the improvements, better quality picture, brightness, improved processing, and more easily make it the clear winner of the two.

While a lot of portable projectors either get lost adding as many features for as little as possible or work well in one situation, Halo+ does well across the board. It’s small enough to be portable, intelligent enough to work across a wide number of places or settings, and does exactly what you want without the complicated things you’d expect from a projector. The built in batter and high lumen count make it a great accessory for playing outside with friends, watching a movie during a large gathering or simply having a way to enjoy your favorite content while grilling. Throw in the Android TV interface, the ability to do practically anything you want without connecting a device and it makes for an easy recommendation. Especially if you’re looking for something to up your party/outside game.

[Editor’s Note XGIMI Halo+ was provided to us for review purposes. The projector was also reviewed on a basic $100~ projector screen.]

Several ports for a wide variety of devices

Supports sound from a variety of sources, offering a lot of options

Great for watching a movie or playing against friends outside.

Sleek design doesn't look out of place in most settings

Battery life is more than enough for a movie, but won't last all day