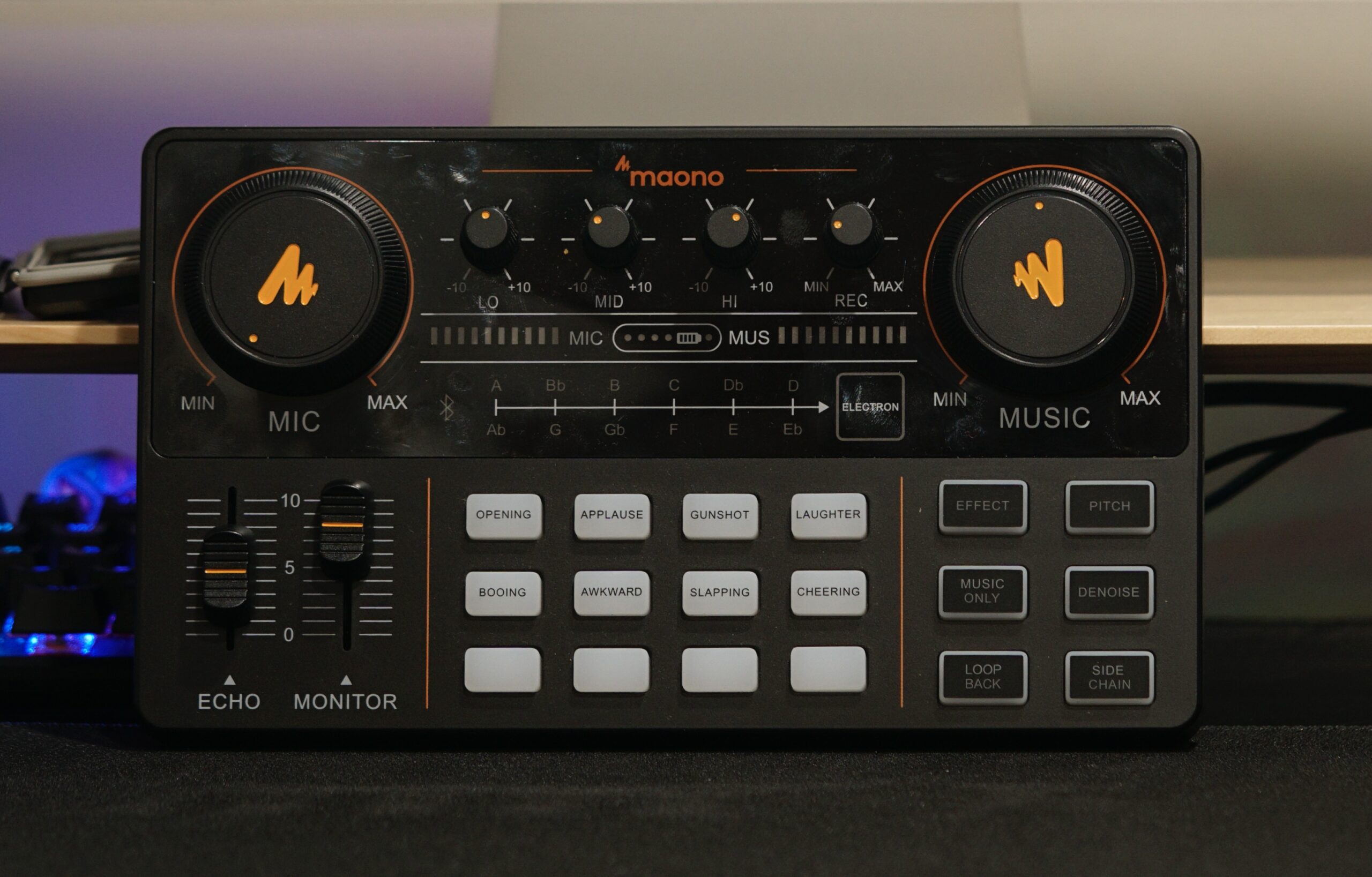 As technology grows and adapts, we see a greater number of accessibility options. It’s almost hard to believe a decade ago a $30 headset with a microphone was good enough to do podcasts and a gaming headset was little more than a microphone. These times have changed, largely due to affordable and useful options. Getting a microphone is no longer a $300+ technical system, there are simple USB microphones for like $40, with the most complicated still being less than that. These options are not as nice as previous options or even traditional methods like XLR, but they make things easier. Seeing the opportunity, Maono developed a basic audio interface known as their Maonocaster Lite. With a lot of options, simple tools, and fun controls, it offers a lot of money for the price but does it provide the value it suggests?

Maonocaster Lite makes a strong initial impression. The box communicates everything you could want to know, all in a compact package. For this review, we got the AU-AM200-S1 model specifically, which means it included an entry-level XLR microphone as well. I was actually surprised by the presentation, as a lot of thought clearly went into this product.

It isn’t just the thoughtful foam packaging securely holding each item, even the message from the company was done on a nice pearlescent paper that reminded me of my old business cards. Nothing about the packaging is particularly difficult to figure out, with each of the items having an explanation as to what their purpose is. But, the big thing is out of the box AU-AM200-S1 is more than capable of performing.

Despite the economical price point, Maonocaster Lite is a nice quality unit. The plastic frame might not suggest this, but it can be seen in all the small touches. These include the echo/monitor sliders having a firm stop at the halfway point so users have an idea how high they’re going. The music knob starts loose before offering resistance so you’ll quickly hear content but not overload your source. The other knob, the mic, doesn’t have the loose start and genuinely requires some effort so you’re not overwhelming others with your voice.

There are also a lot of small touches that stand out. Echo, monitor, and mic each illuminate the mic lights as another way to monitor how high or low you’re at. This also holds true for the low, mid, hi, with rec using music instead. When an electron is active you’ll see what area is being used, along with a light indicating the feature is active. And anyone who finds these options annoying or distracting can alter the illumination, with five different levels of brightness and an option to turn it off completely.

Several Buttons to Control and Edit the Experience.

In addition to key studio effects, anyone who wants to live out their dream of being a Disc Jockey (DJ) or add some levity to their experience has a number of buttons for sound effects. The eight included are kind of cheesy, coming off more like knockoff versions of what you’d expect from laughter or cheering, but there are options for players to add their own. They also will play during gameplay, so you can have some fun with them, even if they’re not used in a podcast or audio recording session.

Usage is one of the strengths of Maonocaster Lite. Every button and input is clearly labeled with a name that is immediately understood. The hardest option for some to understand will be the lo, mid and high options, though they can be freely adjusted with the use of a monitor (it plays back what you’re saying) to either find the ideal or at least a workable option. Once you find a suitable sound, the monitor can be disabled so you don’t hear yourself speak, though it runs the risk of possibly missing a mistake or having to adjust something you no longer realize needs to be adjusted. On the top, there are various inputs, which are explained by a helpful visual both included with the product or online, with straightforward inputs. There is no way to confuse mic 1, mic 2, headset, music input, output in any serious or frustrating way.

As for the included microphone (AU-PM360TR), it is an odd mix of great and expected value. The look and feel are nothing particularly impressive, with a stand that isn’t as sturdy as you might like. It will hold the microphone up, give a decent amount of range, though I often felt like it was a good nudge away from falling over. It also lacks weight, making it extremely easy to move or disrupt. I would suggest using it with a boom mic arm, though make sure the option you pick can hold a traditional microphone, as there is no threading like you’ll commonly find on a USB option. While this covers the look and experience, none of that really matters if Maonocaster Lite falls short in performance.

Immediately Appears as an Input on PlayStation 5

Much to my surprise, it will connect and work with PlayStation 5. If you connect your headset to the Maonocaster Lite it will not make a sound unless monitoring is enabled in some capacity or you can elect to use your controller or another source instead. It will also play sound effects and other things controlled by the interface itself. The only shortcoming I found on PlayStation 5 is the capture is rather weak. Initially, it’s hard to hear what you’re saying and will likely require a fair amount of adjustment to reach the experience some microphones offer instantly. I’d argue it’s worth it, though it varies on what someone is doing. If you just want to enjoy a Destiny 2 raid, perhaps not, though if you plan on streaming for a couple of hours it’s probably worth it. When testing with Xbox Series I could not get it to work.

On PC and Mac, I had a similar experience to what happened with PlayStation 5. Getting Maonocaster Lite working is pain-free, so much so I got it working with OBS in maybe 5 minutes, though set up will take some time. The initial volume is too soft compared to what Maonocaster Lite was outputting and you’re going to want to edit each setting to get the ideal sound. It’s also extremely important to note that different areas offered different balances. On the home screen, it might sound fine, whereas it’s almost impossible to hear during actual gameplay. This is where your settings, options, and volume are extremely important.

Part of this is the included microphones problem as well. It’s not a particularly powerful microphone, meaning it won’t capture as clear, loud, or precisely as a nicer quality one. I still think it’s worth having, either as an introduction to Maonocaster Lite or a dedicated option for another user. I should note, it will still beat a lot of included gaming headset microphones or at least match them. You’re not at a disadvantage using it per se, it’s just one of those things where you’re paying a premium to have an interface and enable better options and it’s by no means putting your best foot forward.

I will say to be careful with the type of microphone you use though. I used my other XLR microphone and it would not respond with Maonocaster Lite. Unfortunately, I don’t have the resources to test which, outside of other Maono microphones, will work with it.

Once everything is running correctly, the biggest advantage to Maonocaster Lite stands out. It isn’t so much powering better quality microphones, it’s how quickly you can adapt to any given situation. With a USB microphone, you either need a program or go into the settings and hope you can find the option. With Maonocaster Lite, if I think I am soundings too high or low, it’s a simple twist to correct. I can also better adjust for range, changes in my room, and a wide variety of other common situations. This makes it a strong choice for anyone looking into podcast and other things, without going crazy on tech or products.

In a lot of ways, the Maonocaster Lite is an amazing value. It fulfills its purpose quite well, while also offering a good amount of options. It makes recording audio for a podcast, stream, or gaming session extremely easy. Some might be put off by certain elements but it’s really a great introduction to the world of audio interfaces and honestly more than a lot of people will ever need. For this reason and more, we think Maonocaster Lite is well worth considering for your audio needs.

[Editor’s Note: Maonocaster Lite was provided to us for review purposes.]

Works with a large number of devices

Can add your own sound effects

A surprising number of options sure to make most owners happy

Simple to understand options make it a breeze for newcomers

Requires a bit more tinkering than USB based microphones

Lacks some advanced features that some professionals might miss

How to Unlock Forerunner in Destiny 2