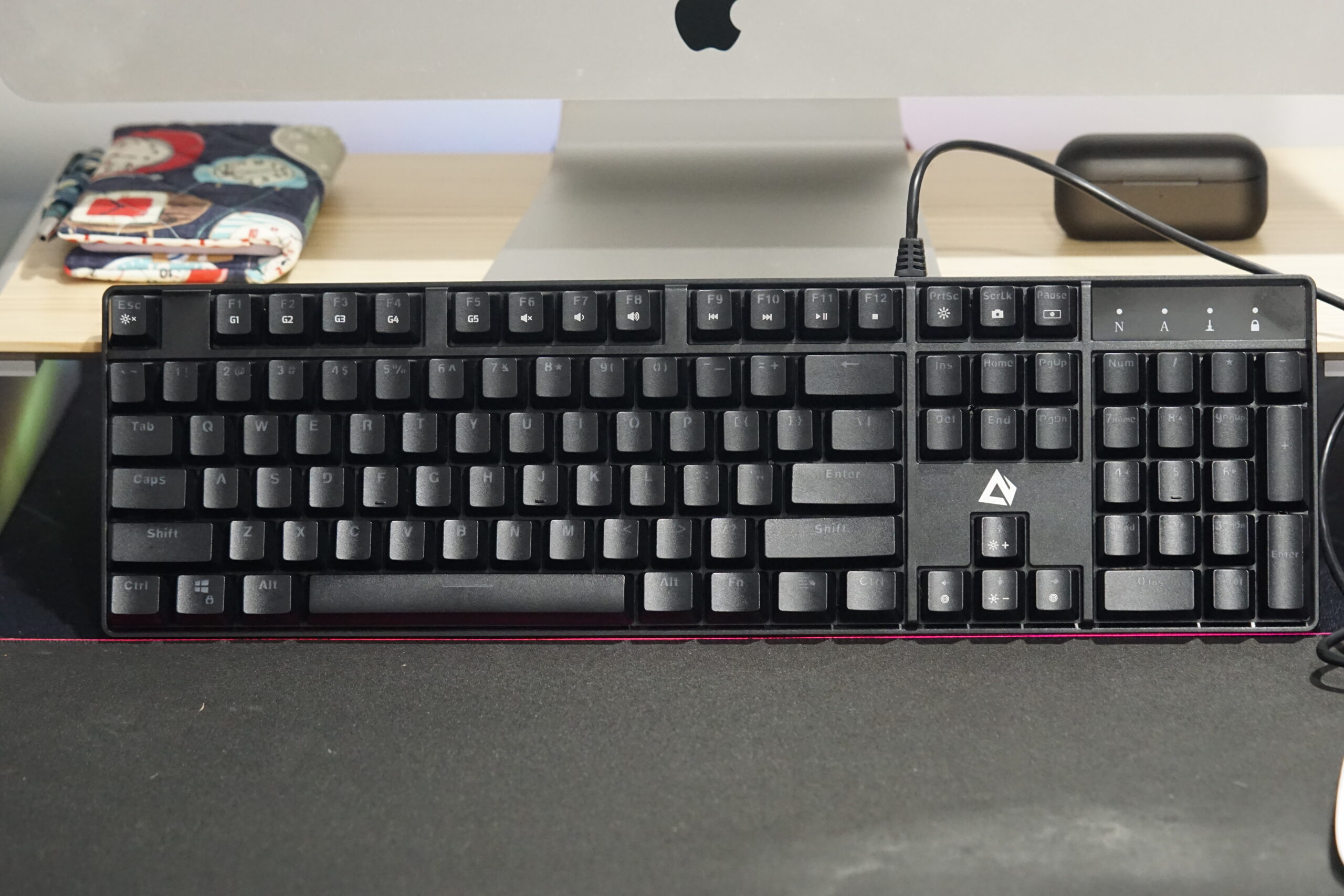 Technology is an interesting business, one with incredible ranges in regards to price and features. While a lot of people will stick with a major brand like HyperX or SteelSeries for most of their gaming needs, some less known companies make solid offerings at a fraction of their cost. One such company is Aukey, known for their low prices and wide range of offerings. Over the past couple of years, they’ve offered many different takes on a keyboard, with their latest, KM-G16, offing premium features at an entry-level price. However, for a little more, is it worth saving the money?

With KM-G16 Aukey has stuck with their usual gaming packaging. This includes a black cardboard box with a glossy logo and a model number on the back. Like I’ve mentioned in the past, this is due to Aukey not having a retail presence, thus loud packaging wouldn’t really matter. Inside is the keyboard wrapped in Styrofoam, their usual two year warranty card and a small manual.

At first glance, Aukey went in an interesting direction with KM-G16. Over the years we’ve seen Aukey attempt sleek, try their hand at traditional and with KM-G16, it really looks like a budget product. The notification area for caps lock and things like that is overly pronounced and feels out of place. Everything is textured plastic that isn’t pleasing to touch or even look at. The key arrangement is rather awkward, looking like a downward slope. It gives the impression the keyboard is flat and stands out in a rather unusual way. Even little things are off, like some of the keys don’t sit flat out of the box.

Unfortunately, even the little things are missing on KM-G16. Instead of having a braided cable, it’s a normal plastic one. The usual hook-and-loop fastener was replaced with the usual coated metal wire. Only two heights are supported, cable can’t be removed, with even the light for things like caps lock being on isn’t particularly pleasing looking.

Thankfully, there are some redeeming aspects that come at a cost. It’s still a backlit keyboard with RGB, with the brightest lights I’ve seen from Aukey, and a number of effects, though the keys seem to be stuck on specific colors. None of the presets change them, nor does the software seem to have the ability. This can take away from RGBs rather mystical elements, especially since it makes it unable to do the ever popular wave (cycling between a rainbow of colors across the device). Instead, the closest thing Aukey gives it a kind of pulse where colors start dim, go bright and then return to a dim color.

Usage is kind of a mixed bag. Oddly enough, the key positioning has a slight learning curve that went away about 20 minutes after using. Typing and gameplay were accurate enough to be successful, though nothing particularly special. This is also a clicky keyboard and the sound is very pronounced, even for that. This becomes especially noticeable when you type or move rather quickly.

Standard size keys, so things like A, S, D, F, and G function how you’d expect a clicky keyboard to sound. There is an audible click confirming the key has been input. Its keys like backspace, space, enter and shift are a little different. As a fast typer, I can sometimes apply some force to my keystrokes. As a result, the larger keys make an even louder sound. It’s the type of thing that is oddly overpowering and even swapping from KM-G16 to my usual HyperX keyboard it almost feels like I lost some hearing. It’s unreal and almost surreal, to the point where I couldn’t imagine playing with it a long term of typing a paper.

The sound can be avoided by changing how you type. Slowly pressing on the spacebar produces the click you’d expect, though that will limit the usage. For most, you’ll probably find yourself having to yell playing with others or figure out some way to mitigate the sound.

Aukey’s KM-G16 hits that funny point where it’s just too cheap. When you factor in MSRP is $40 and even on sale you’d expect to pay $30, you’re better off picking one of their higher-end options or getting something like HyperX’s entry-level unit. There are simply too many negatives and the only positive that can make up for them isn’t there. It’s unfortunate too since the only positive is Aukey has made a worse keyboard.

[Editor’s Note: Aukey KM-G16 was provided to us for review purposes.]

Feels cheap in every way

Hard to, at times, type