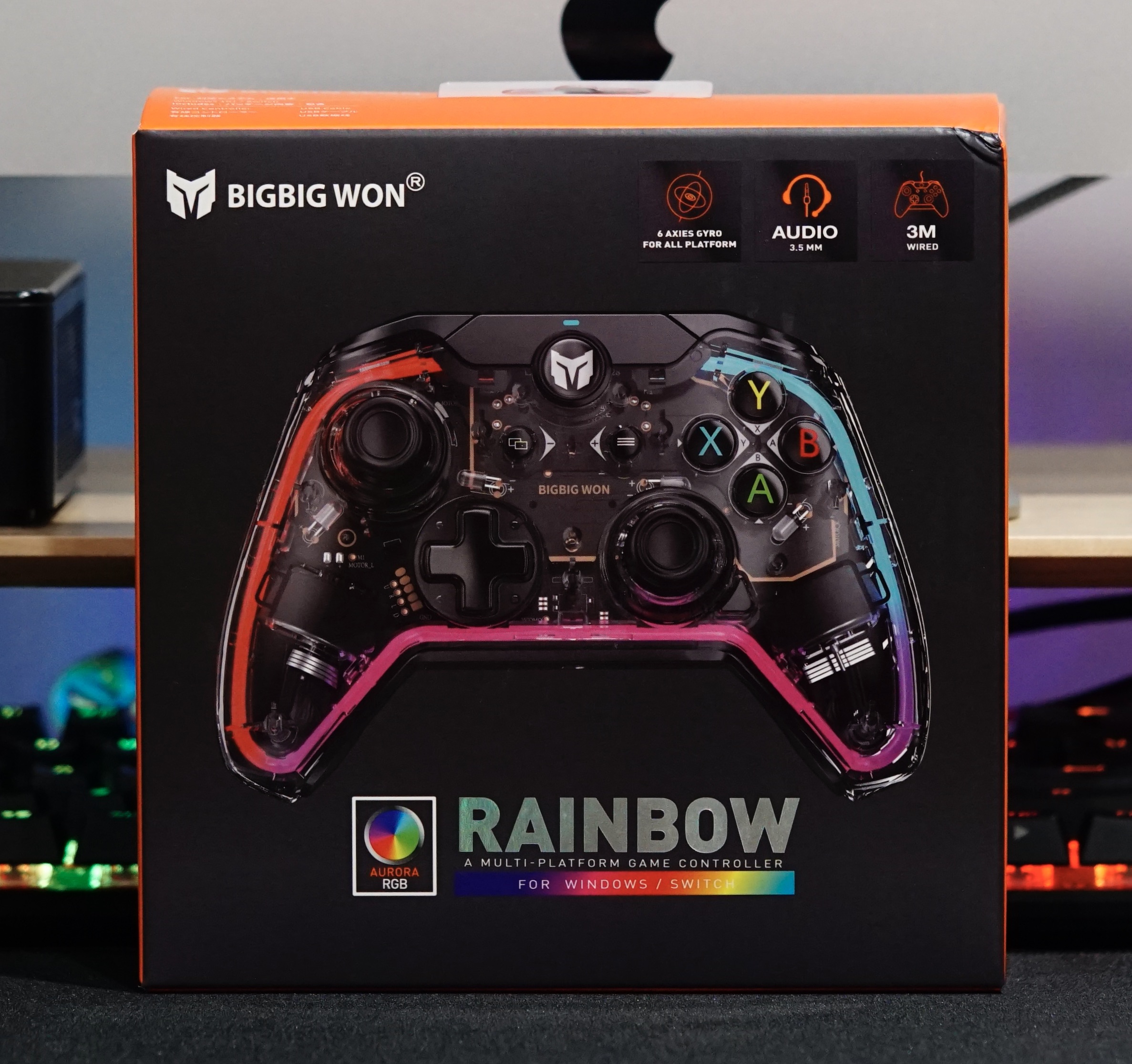 As gaming constantly evolves, we’re at a point where despite things being different, a lot of companies are moving towards universal solutions. Many HyperX products, like their keyboards or mice, work on game consoles and even some unexpected things, like an audio interface, can connect to a PS5 and work. One of the more useful is a controller. Even if many controllers have ways to connect to other platforms, players are asking and expecting more from their controllers. Additional buttons, features, different feel, battery life, case, weight and more all enter into the thought process and it can be a lot to take on. One of the most recent solutions, BigBig Won’s Rainbow controller, offers a fun take on the hardcore gaming controller. With the ever-popular RGB on full display, will it wow players or it is just a more expensive take budget controller from the past?

At first glance, BigBig Won’s Rainbow controller looks like what you’d expect from a controller like this. The front of the box highlights key features, most notably RGB lighting, with brief explanations of what to expect on the back. Getting inside is a breeze since the sealed stickers have easy remove tabs. Once inside, there is a plastic holder with the controller firmly in place with a cable to connect to your desired device below.

Immediately the weight of Rainbow stands out. At 226g it’s one of the lightest controllers out there. For reference, Sony’s DualSense is around 280g, which is about what the Xbox Controller weighs, with Nintendo’s Pro Controller being in the middle at 250g. Anyone with experience with any of the aforementioned controllers will probably find it really light, but don’t mistake it for a lack of durability. It feels like a sturdy device that will survive a drop or two without breaking.

Another notable element is the feel. Most modern controllers, like the ones mentioned and the Stadia controller, have a matte feel and several have textured bottoms that feel nice to the touch. Since this is an RGB controller, Rainbow has a slick plastic feel. I would say that choice makes it slightly more likely to slide out of your hand, especially during an intense session, though in most cases it will just feel a bit different from traditional offerings.

As for the actual buttons and thumbsticks, they’re quite nice. For the XYBA buttons, it’s ever so slightly slicker than an official Xbox controller, with them being about on par with a DualSense. The D-Pad is noticeably slicker than what Sony does on DualSense, though that choice makes it a little easier to maneuver, something that makes sense given it’s one big piece of plastic instead of four little ones. The real highlight for Rainbow are the thumbsticks and triggers. The concave design feels nice with a little extra protection and slightly more resistance to help control each and every action you want to make. As for triggers, while they’re not as nice feeling as an Xbox controller, they’re quicker to hit and have a sharper top to help prevent falling off.

Beyond that, Rainbow is clearly designed with the Xbox controller in mind. The button arrangement designs and even look match it, making it a good choice for anyone who prefers or extensively uses a said controller. This also makes sense given this is a PC product first and foremost. The only real changes between the two products are a more traditional D-Pad, a capture button now to the right of the right thumbstick, and buttons on the back. One small, but appreciated, touch is having a small icon next to each button that indicates what it would be on Switch, the other platform supported by default. It still makes things a little confusing, but given something like X could be in one of three different spots depending on the platform, it still helps.

For all the things Rainbow gets right, it’s unfortunate to see a micro-USB connection. Even though it includes a 10′ or so cable, the antiquated connection is going to be hard to replace long term. It also doesn’t help that the connection is recessed, making it hard to use just any cable with it anyway. The other end is also USB-A, which means you’ll need a USB-A to USB-C adapter if your device lacks that connection, another thing a simple USB-C connection could’ve helped eliminate. Thankfully, I can confirm it isn’t overly picky in terms of adapters. I have a good number of these HP flash drives and with that, it would connect directly to my GEEKOM Mini IT8 or directly to my Nintendo Switch no problem.

One massive positive to Rainbow is how easy it is to set up. Simply plugging it into a Windows computer will make it work, though you might need a driver before the initial use. The switch was a little more complicated, though all you need to do is go into the system settings, head to controllers and just enable the Pro Controller wired communication option. After that Rainbow will work. On subsequent uses, you just need to wake the device to use the controller, as it does not seem able to wake Switch itself.

Usage was pretty good. I played a couple of titles like Destiny 2 or World War Z on my computer without having an issue. The back buttons also helped and were easily programmed by pushing the function button, selecting the input you wanted, and programming it. It’s simple enough that you can freely change it for each game or even mode if you absolutely need to. There are also turbo buttons, something that can help within certain situations.

On Switch, I used it to review the latest Warriors game and play a couple of other recent projects. This felt a lot nicer than the Joy-Cons and I’d say I preferred it to the Pro controller, assuming wired is not a deal-breaker. It can also give players a slight edge in something like Splatoon 2, though just having a better arrangement goes pretty far.

The only thing that really stood out after various tests is back button performance. Instead of using paddles, there is an angled toggle on the left and right side. It’s meant to line up with the middle finger and in the case of my hand size, isn’t too bad to rest them on top of the buttons. During intense matches or key moments they can lock up if not pushed in their proper direction. Taking things calmly and slowly should eliminate that, as I had no issues casually doing it, just that it can potentially come up in certain situations. Muscle memory and practice should eliminate these shortcomings long term, just expect a learning curve.

Much to my surprise, connecting Rainbow to a mobile device to use the app was shockingly simple. Once it was powered on, I just clicked connect and it worked within moments. Through the app, you can control a good number of aspects of the controller. I included the various settings above, which include trigger sensitivity, buttons, and more.

No review of Rainbow would be complete without briefly touching on the RGB lights. Having seen both higher and lower-quality RGB items, I would say Rainbow looks nice. It’s extremely colorful with a good amount of light, allowing it to stand out in a good way. Through the app, you can use various presets or make your own, which isn’t unique, but always good to have.

BigBig Won did a pretty good job with Rainbow. It’s a fun-looking controller that performs quite well on PC and Switch. It’s unfortunate that it will not connect to Xbox or PlayStation, with the latter working through a device like their R90. Unfortunately, we were not able to test that, but on the platforms, we could test it on we found it to be a solid option if you’re looking for a pro controller that leaves people in awe.

[Editor’s Note: BigBig Won Rainbow Controller was provided to us for review purposes.]

Thumbsticks feel really nice to use

Works on PC and Switch natively

Lightweight design and sleek feel won't appear to everyone