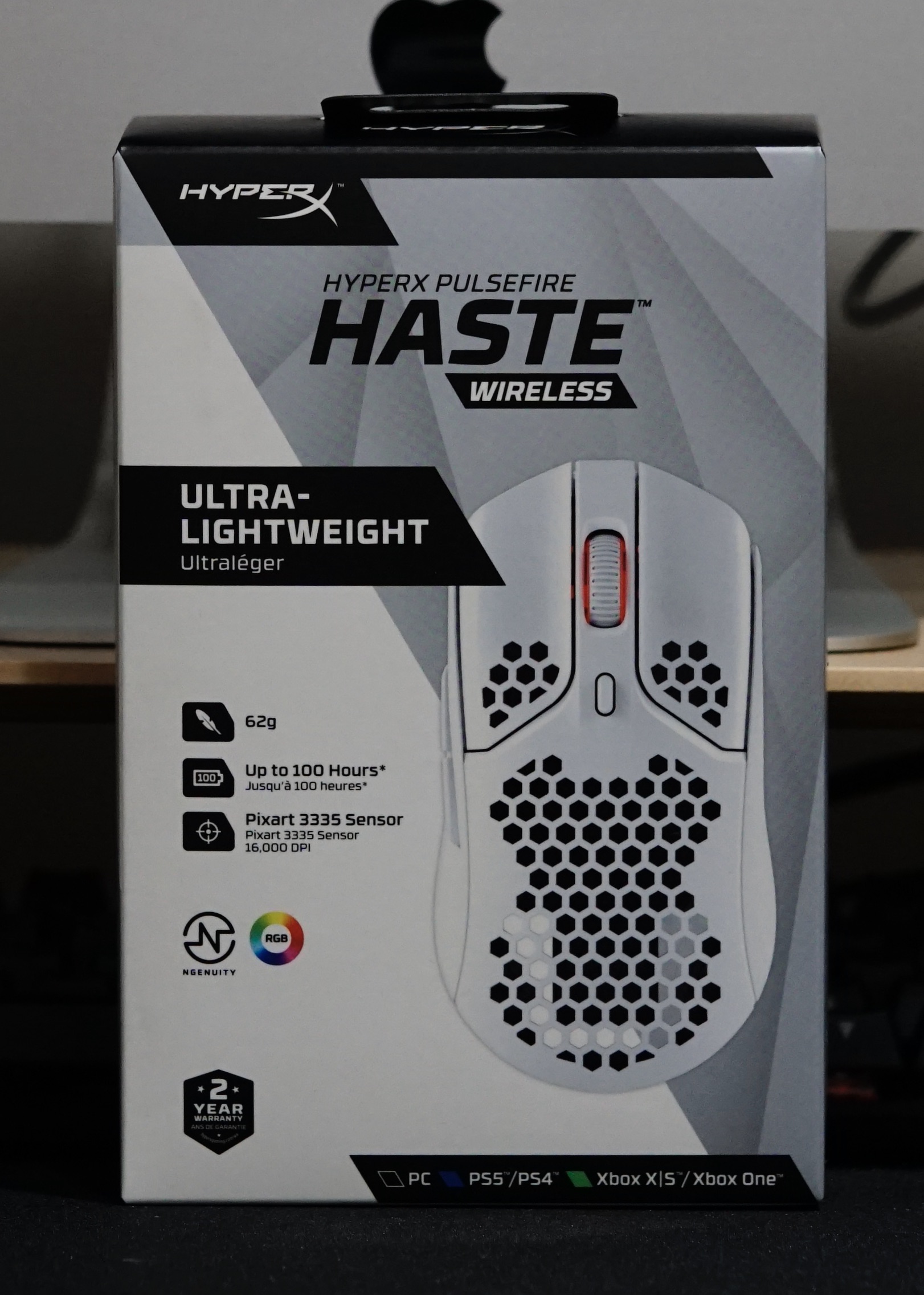 Options are great until they become overwhelming. Every brand has its own take on each product, often with said project excelling in a wide variety of settings. As I mentioned in our UHURU WM-08 mouse review, right now lightweight mouses are big. Some have lights, others keep it simple, with HyperX entering the wireless game with their Pulsefire Haste Wireless mouse. Taking what people loved about the wired version and removing the wire sounds like a winning strategy, though does it work in practice?

One subtle thing I enjoy about HyperX’s packaging is the colors tend to change with the product in question. For this review, we have the white version, which changes the usual red and black colors with a far more subdued range of grays. Beyond that, the packaging is standard fare for HyperX. On the front, there are critical features with a glossy picture of the mouse, with most of that information appearing on one of the sides. On the back, there are a few additional details, mostly the TTC Golden Micro Rustproof Switch, virgin-grade PTFE skates (the plastic things on the bottom that actually touch the surface), six programable buttons, and the contents with pictures on the bottom.

Inside is a removable cardboard cover, with Pulsefire Haste Wireless securely held in place via plastic and the dongle. Under this are the additional accessories, which include a white braided USB-A to USB-C cable, a white puck with a USB-C and USB-A connection to move the receiver elsewhere if need be, along with an additional set of skates and grip tape. While it’s impossible to say if you’ll ever feel the need to use the additional set of skates, the grip tape is pretty nice. They are basically rubber stickers that go over both triggers and the sides if you want to improve your grip or prefer the feel.

Almost immediately the difference in weight is apparent. I’ve been using the Pulsefire Dart Wireless for a bit, which weighs .24lbs, so Pulsefire Hast Wireless’ .13lbs is huge. The pattern is also a lot smaller than what we saw with UHURU WM-08, which makes the edges hard to feel. You’ll still have a sensation something is missing, though it will quickly disappear. Because of the placement on the left and right top buttons, you shouldn’t feel the holes on your digits and even if you do, this is where the grip tape is really useful. While both sides lack any holes, there is a considerable number on the bottom, along with a place to put the dongle when it isn’t in use.

The performance was pretty good. As mentioned above, the main advantage of Pulsefire Haste is having a lighter object to move. This makes it extremely easy to whisk your curses/aim to whatever you’re looking for. Even after extensive uses, I noticed a bit less fatigue with use, something that stands out if you also commonly work from home or frequently use said computer.

Functionality can be further improved through HyperX’s NGENUITY software. All six buttons can be reassigned by just clicking on them via the software and selecting what you’d like them to do instead. This also supports macros, windows shortcuts and presets, making it easy to have a work, office and gaming setting. This is also where the LED light (scroll wheel) can be edited, along with changing the DPI settings, which go up to 16,000.

The Grip Tape Feels a Lot Better to the Touch

Part of what makes Pulsefire Haste Wireless stand out are the TTC Golden Micro Rustproof Switches. Much of the difference is subtle, especially for non-gaming uses, though they do stand out. For example, the actual click for left and right makes a slightly more impactful sound than Pulsefire Dart wireless. The scroll wheel also offers more resistance, with more feedback to indicate it’s in use. This won’t appeal to everyone, though it makes for a more controlled turn. Both side buttons work about the same, just a smaller footprint on Pulsefire Haste Wireless.

In terms of use, HyperX did a fantastic job with Pulsefire Haste Wireless. It’s extremely lightweight, the accessories match perfectly, most things were thought of, buttons are satisfying to press and use, along with very impressive battery life. The main negatives really come down the preferences. These include people looking for additional buttons, more LED lights or side features like wireless charging. But without a notable exception, you really can’t go wrong with Pulsefire Haste Wireless.

[Editor’s Note: HyperX Pulsefire Haste Wireless was given to us for review purposes.]

Buttons are satisfying to press and interact with

Accessories really round out the bundle, with grip tape and extra skates being a welcome addition

Barely noticeable that the holes are present

Because of the way the skates work, you'll likely notice fibers from a mousepad or other things get stuck to it

Resistance on the scroll wheel won't appeal to everyone