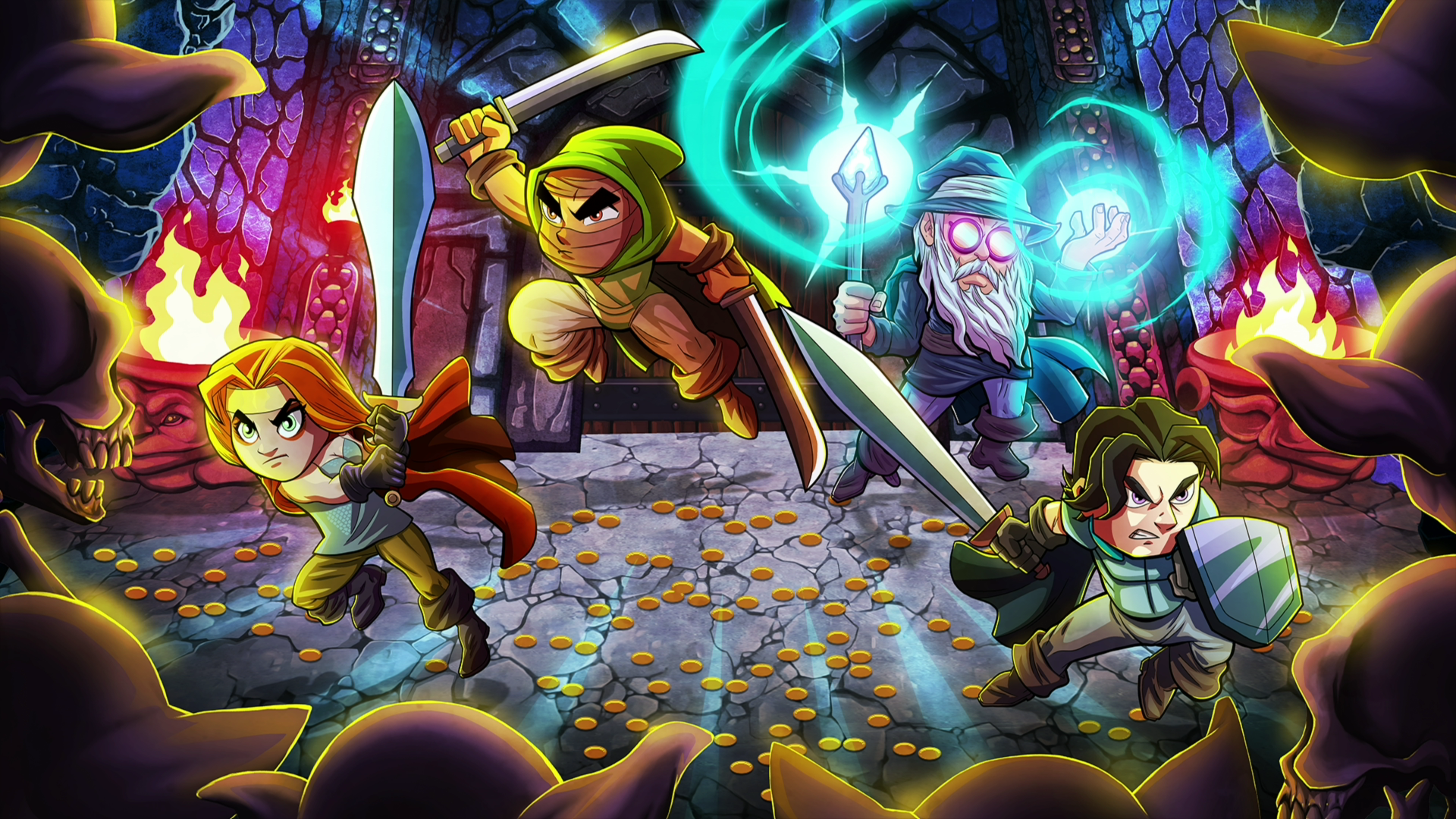 Right now, roguelikes and rogue-lites are extremely popular. A couple of months ago players were talking about Cult of the Lamb, before that Game of the Year contender Hades, to even Sony’s PlayStation 5 exclusive, Returnal. With Bravery and Greed, players get the thrill of randomized runs, with the time-tested beat ’em up genre. With so much going for it, will players be rewarded with their bravery, or will the developers be punished for their greed?

Bravery and Greed doesn’t have much of a story. It starts with the four characters, an amazon, knight, mage, and thief drinking together in a bar. The thief informs the characters that a hidden gate behind a waterfall contains untold riches. However, to gain the treasure, the group needs to find four runes hidden in different areas around the world. When a player is successful, there will be a brief cutscene with the ending you unlocked. Of the two I unlocked, neither was that different and mostly linked to how the outcome would impact the world going forward. Before worrying about the future, players need to focus on overcoming the challenges that await in Bravery and Greed.

As previously mentioned, players can select one of four characters, each with a good number of alternate colors. Each character has a different play style, which will impact difficulty. Despite the amazon and knight being relatively straightforward, the thief and mage are surprisingly complicated. As a result, anyone who selects either character will have a substantial learning curve, whereas the other two you can pretty much master in 10 minutes.

What makes the thief and mage different is their overall play style. Since the most challenging enemies will avoid you, both characters struggle with closing the gap. For the thief, their combo advances, but limited range makes it hard to catch distant foes. As for the mage, they have more range, though there is little to no advancement in their combo. Once an enemy is out of their range, they’re not going to catch up. To mitigate these shortcomings, the thief can turn invisible and throw knives, with the mage trading their magic wand for a hulking partner to overwhelm enemies. Both characters have a lot of potential, making for an exciting and satisfying run. However, most will probably default to more accessible characters, as you could probably beat most levels mindlessly pushing attack as the amazon.

One of the Various Bosses

In addition to Bravery and Greed favoring one or two characters more than the rest, it’s one of the weakest roguelike games I’ve played. For starters, enemy diversity is pretty low. Despite having roughly 50 generic enemies, only 30 or so appear in the initial four stages. Of those 30, several are unique to a specific stage, so you can’t get an Acid Slime to spawn on The Ice Caves, with stage order further reducing the number of possible enemies. To put this into perspective, I believe slime only spawns on the second stage in a run, so in the time it took me to platinum, I only killed 90 across all four types, compared to 2,392 skeletons. Likewise, bosses are predetermined, meaning every run will be against the same four enemies and then one of two at the very end.

Similar things can be said about equipment, perks, boons, and other modifiers you might encounter on a run. Unlike some of the biggest names in the genre, everything feels the same. This can be best understood by looking at the various gloves. There is one that sets enemies on fire, increases attack speed, poisons enemies, decreases enemy attack speed, increases attack, reduces enemy attack/defense, attacks heal, and you get the point. Many unmentioned gloves do the same essential thing; they just have a gimmick to go with it. You might notice a lightning bolt, flash of light, poison cloud, or create tendrils, though, in the grand scheme, the average stage will be spamming your attack until everything on the screen dies. Odds are you will not feel a fundamental difference between 60 DPS for 2.5 seconds and 50 DPS for 5 seconds, as the average enemy has around 1,000 health and will be dead in 4 seconds.

While equipment, for the most part, is pretty interchangeable, paths attempt to cater to different play styles. There is one for survivability, another for power, and one for risk/reward, with the last helping battle-hungry players. Under certain conditions, these can make a difference, though the core problem is the same. They modify various stats, with the core experience remaining unchanged. Admittedly, paths that increase attack feel a bit more satisfying than those that bolster defense. However, this has less to do with a fundamental shift in mechanics and more to do with them ultimately beating any challenge.

One of Bravery and Greed‘s unique elements, the Arcana system, arguably suffers from this the most. The idea behind the system is cool. The 22 different cards act as run modifiers. Some aid players, like The Sphinx, give a perk if you can answer a grade school riddle, with others vastly increasing difficulty, such as The Sun and its perk that makes every monster corpse explode, dealing damage to players. Not only do they change how players approach a run, but many also offer additional gold (caps at 330 percent), with The Moon allowing additional cycles with “more dangerous” enemies. However, the only difference I noticed on my Moon run was additional spawns of highly problematic enemies over better AI, unique foes, or special mechanics.

Your Favorite Room, now in Blue, Green, and Red

The most noticeable and annoying thing in Bravery and Greed is reused assets. Normally I wouldn’t fault a developer for a weapon reskin, changing an enemy design, or something like that, but Bravery and Greed tries to squeeze every room to the point where it increases burnout. Take the set of images I uploaded above. These are one of the more common rooms in The Ice Caves, The Subterranean Jungle, and The Magma Pools. Each has its theme, but they’re all clearly the same room. Fortunately, I never got/noticed a Necropolis version, but this is far from the only room that was reskinned for different stages. And oddly enough, even after 30 runs, I ran into rooms I either forgot existed or only ran into once. It’s a shame that reskins add to the monotony over having fewer rooms but more unique ones.

Despite the negative review, I found Bravery and Greed to be a lot of fun. There is enough challenge to make runs enjoyable, with enough modifiers to make a few complete runs a lot of fun. That, along with the low requirements to unlock everything, online multiplayer, and optional events, help the experience immensely. It’s a shame that everything feels the same, with several stages being reskins across multiple different levels, along with no major secrets, but there is enough to get your pick up to play with your friends, be it online or offline.

[Editor’s Note: Bravery and Greed was reviewed on PlayStation 5, and a copy was provided for review purposes.]

Everything is unlockable without too much time or effort

Combat has the potential to be very deep

It all feels the same

No secrets to uncover