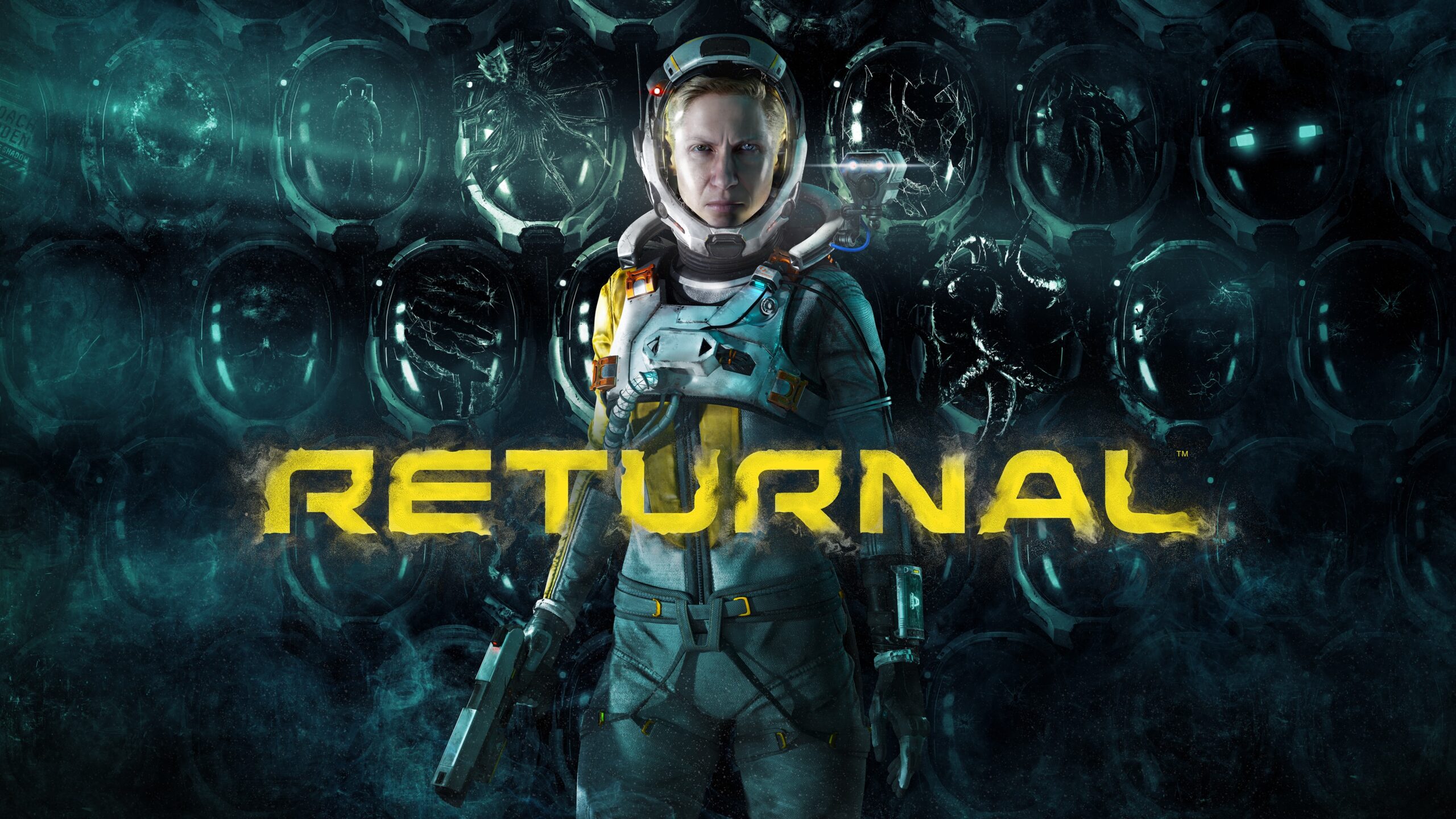 It didn’t take much for Housemarque to sell the idea of Returnal. For years the roguelike genre has been mostly niche games, likely due to the low cost and high return on investment. Even with 200 hours on Enter the Gungeon there were synergies I never obtained and builds I never quite got to experience. With Returnal giving the genre great graphics and details, it has the potential to blow a lot of minds. This, combined with it being among the first games exclusive to PlayStation 5 there is a lot of hope, but is that hope well-founded? Here’s our Returnal Review.

Almost immediately Returnal explains the core premise. Selene crashes on Atropos, she wakes up, explores, dies, and then the cycle restarts. As runs increase, eventually, you’ll locate Selene’s home on this far away planet, a detail that offers more questions than answers. Unfortunately, anything more would spoil what awaits Selene in the house but it’s a ride that often leaves players guessing. Even the ending and corresponding true end open the door for a lot of theories to explain what exactly is going on. But, regardless of why Selene is in this loop, it’s an experience defined by gameplay.

Every run starts somewhat the same. Selene wakes up by her ship with a pistol in her hand, ready to face new challenges. Sometimes that first room will lead to the boss, other times the exit, though most it leads to some kind of danger. Powerful turrets and terrifying aliens dominate this foreign world and it will take a fair amount of skill for Selene to overcome.

Luck will determine a good portion of how this run will go. Maybe the first room will have a great weapon, Selene will gain the spaceman figure for extra life and perhaps there will be enough resin to triple her life, or perhaps there is just a giant enemy with a shield that kills her before she knows what happened. These are underlining concepts for the roguelike genre, well, that and procedurally generated rooms, leading to some concerns about difficulty.

As a returning veteran of both roguelike games and the third-person shooter genre, Returnal is honestly pretty forgiving. Luck can tip the scales in one direction, though so much of the experience is tactics. What you do, how you do it and why it needs to be done will help determine how successful Selene will be. But, for what it’s worth, it’s surprisingly doable with the right tactic. So much so that I’ve honestly cleared some of the levels people struggled with by simply running to wherever the exit is.

For those who take the time to clear each room, there are absolutely set tactics and play styles. In this regard, Returnal is actually similar to Doom Eternal. Most of the difficult enemies, be it for their quick attacks, lock-on bullets or aggressive tactics have an intended way to beat them. By opting for their weakness, increases the likelihood of Selene taking damage but will often dispatch the enemy far quicker.

The remaining enemies come down to tactics. Bait attacks, dodge, and then punish or hide behind a tree and let bullets lock on and dispatch foes with surprising ease. As players progress, enemies start to impact the layout. There are beams that go through walls that either need to be avoided or dodged, enemies that won’t let Selene rest, or overwhelming numbers that simply can’t be stopped in time. It will take some time to master, though Returnal makes it easy by being oddly limited.

Unlike most roguelike games, the time, effort and overall quality surprisingly has a negative impact on Returnal. Playing through something like Enter the Gungeon multiple times feels seamless, due to a wider array of levels and a more generic design. Only the mainstay items, like the guaranteed fireplace on the first level or crypt on the second really stand out making each run feel unique. Returnal not only has a smaller range a set pieces, because there is only so many random spawn temples they can put on the Mars-esque desert or sunken landmarks in the sea, that it doesn’t take long to memorize each section. This was one of the tips I included but it eventually lead to being such a key part of Returnal’s experience. Especially once you realize maps from the first and second area are reskinned and repurposed in the fourth and fifth. Yes, according to the story they’re the same places at a different period of time but it makes things feel more mechanical. Like when you notice bad CGI in a movie. It takes you out for that moment and that moment is all it takes.

Similar things can be said about weapons, items and even parasites. As near as I’ve unlocked and found online, there are 10 guns in Returnal, each with nine perks a piece and like 11 alternate fire modes. Guns can also have three or more perks, so it isn’t particularly difficult to obtain your dream gun. To put it into perspective, base Enter the Gungeon had over 200 possible weapons, whereas Returnal is one in 10 and then at worst one in nine for any given perk. As a result, I can reliably hold out for Tachyomatic Carbine with leech rounds or Hollowseeker with Portal Beam, because it’s really only a matter of time before one appears. Even with a bad alternate fire and terrible stat distribution, free health or a deadly laser far outweigh a pistol with max bonus damage in most situations. But, the bigger thing to remember is, most of these items are unlocked through progression and then limited by proficiency. At the start there are like three weapons and three perks, so it’s not even remotely difficult to obtain the same weapons.

Items and parasites work the same way. There are a small handful of items, that does increase slightly as Selene progresses on her journey but it doesn’t take long to find most of the items you might want. I can reliably hold out for any given item and typically find it within three runs. This is perhaps the really underwhelming aspect behind Returnal’s roguelike mechanics.

If most runs ultimately end the same, Selene in front of some alien creature holding a Portal Beam Hollowseeker and a ton of health, does it really feel like a different experience each time? Is there really a point in so many of the negative items when, realistically, they likely just exist for people looking for odd challenges or, more likely, to break up the item pool? And, can Returnal be considered a good roguelike when it often feels like you’re looking behind the curtain at the end of The Wizard of Oz? All of these are questions I was left with, but one thing I didn’t question was the actual experience.

Despite a rather limited and mechanical approach to the roguelike genre, Returnal is absolutely the game players needed to see on PlayStation 5. Up to now, a good number of features existed purely in marketing documents or in a rather limited way. Here, adaptive triggers, haptic feedback, and 3D audio are all on full display and it makes for an incredibly immersive experience.

Adaptive triggers make it clean when Selene is zooming in or choosing to use alternate fire, with haptic feedback reacting to the world in such a wonderful way. It rumbles when you shoot, jump, land, dodge, each of which feels slightly different. In front of Xenoglyphs, Returnal’s alien writing, there is a pulsing sensation when Selene gets near, a stronger one when she stands on a translocator teleportation device, certain items have their own distinct reaction and so much more. Even with my TV muted, DualSense has a plethora of sounds to indicate one thing or another.

Returnal also makes full use of audio. The rain feels like it’s all around you, it’s clear where threats are coming from by sound arrangement, there is an eerie sound when Selene walks near a Xenoglyph leading to some exciting experiences. My favorite sound choice was ascending the tower to fight the fourth boss. Selene notes, both before and after, about the sound haunting her, with the organ music slowly increasing in volume as she makes her way to the boss ultimately ending in an overpowering sound that is legitimately hard not to appreciate. Heck, even transitions and loading is handled extremely well in Returnal.

Arguably one of the coolest elements in Returnal is skipping to the third biome. To do this, Selene needs to find a broken path that requires the hook to cross. Slowly the level design begins to change and out of nowhere a door opens and you’re standing in a brand new level. It feels almost magical, even if the gap likely exists as a modern elevator to mask loading but this is fine because playing it feels so natural. It’s actually so natural you likely won’t even realize what happened until it’s done, like a masterful magic trick. It’s really something that you’ll appreciate even when you know it’s coming.

I think Returnal is ultimately successful in what Housemarque wanted and, more importantly, PlayStation 5 needed. Thus far, no game has really shown gamers what PlayStation 5 brings to the table beyond virtually non-existent load screens or finally making frame rate a point of discussion. It shows DualSense is more than gimmicks like the ill-fated Sixaxis turned out to be or an idea that never quite made it, such as EyeToy, making me exited for the future. But, even without this, Returnal is a good shooter with a fascinating story that might not achieve what I wanted in a roguelike but absolutely created an experience that players will remember for the foreseeable future.

[Editor’s Note: Returnal was proudly bought by the staff at Infinite Start.]

Looks stunning, with a good amount of detail put into this world

Story might be limited but it offers so much to digest

Surreal elements often bring out the horror of a foreign location

Challenging but not impossible, especially once you master enemy moves

All roads lead to the same conclusion

Made in Abyss coming to Switch, PS4, and Switch