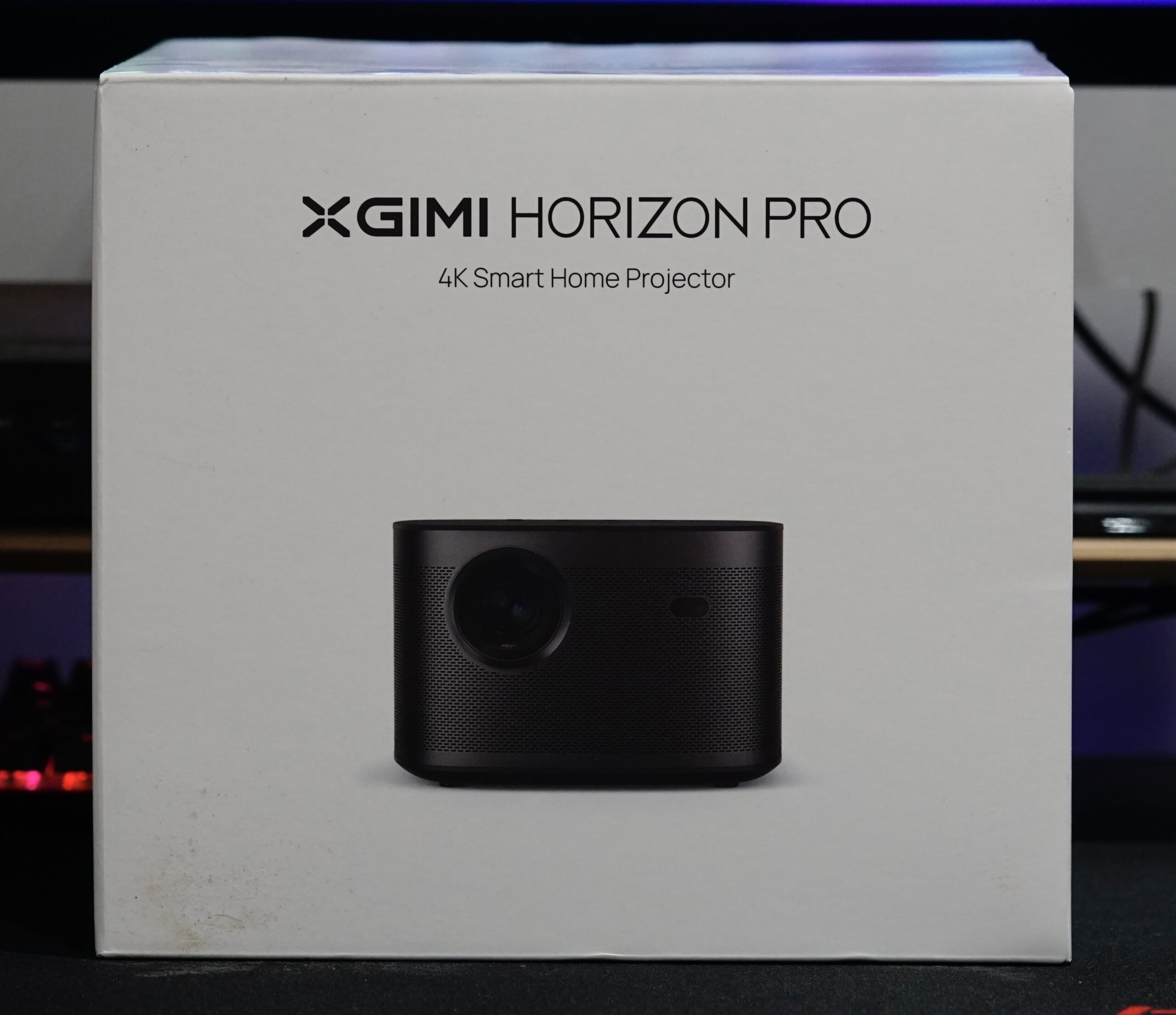 For years, one of the most significant advantages of a projector was screen size and quality. Even if larger televisions existed, paying $50,000 or more just wasn’t worth it when you could do the same with a projector for a quarter. The rise of 4K starts to lower that gap, along with streaming and other benefits, putting projectors in a weird spot. This has resulted in many unique products, such as ultra-short throws, incredible portable models, or innovations on the core idea. Sometime back, XGIMI released the Horizon Pro, which was meant to be their take on a premium projector that strikes a strong balance between quality and value. Having used it extensively, is it worth considering, or are you better off looking at other products?

At first glance, Horizon Pro’s packaging has a good balance between modern and stylish. Instead of a relatively flat cardboard box with a couple of images, it’s a simplistic design with the most notable features being prominently shown. Even inside, Horizon Pro is held firmly in place by foam inserts that protect it if anything happens. It makes a great first impression that continues when looking at the product itself.

Unlike a lot of projectors, Horizon Pro looks sleek. Similar to XGIMI’s Halo line of products, there is a single piece of space grey colored metal that goes around the left, front and right side of Horizon Pro. This gives it a more premium feel and is perfect to put on a shelf or to the side. On top are a couple of buttons, including power, play/pause, and volume up/down. On the back is a small vent, optical out, two USB 2.0 ports, a standard HDMI and HDMI ARC port, ethernet, and AUX. It’s a great range of options, making it very similar to a television, which is useful compared to other projectors that require more complex audio solutions.

Along with the nice look, it’s a pretty small projector coming in at 208.4 x 218.4 x 136.2mm . To put this into perspective, it’s only a couple inches (about 2.7″) smaller than your average PlayStation or Xbox game. That said, the attractive size comes at an unfortunate price. Horizon Pro uses an external power supply, which is pretty sizable at 7″ x 3.25″ x 1.5″, making it hard to mount on a ceiling. Any other configuration should be incredibly straightforward, which is good to keep in mind.

Rounding out the experience is a different remote from their Halo line of products. The far more conventional remote is mostly metal, giving it some weight and a cool feel, with a more traditional button orientation. Instead of having a focus toggle, it boasts an autofocus button, which is pretty handy. Not only does it look incredible, and I find it much easier to use, it also has a spring-loaded battery release that is simply awesome. Anyway, you’re free to set Horizon Pro up with everything out of the box and plugged in.

Those familiar with Android TV will have a good understanding of how the setup process works. After plugging it in, a series of prompts will ask basic questions. Set up wifi, sign into your Google account, which apps you use, and things. It’s incredibly straightforward and shouldn’t take more than 10 minutes to complete.

Navigation is pretty good. Admittedly, my television also uses Android TV, but even without experience, Android TV is pretty easy to learn. The main page will show curated suggestions, favored apps, and other shortcuts to recently watched programs. Another tab offers several tips, with the last showcasing all your applications.

Since Android TV is a standard operating system, you should not have any issues getting something to work on it. For this review, I used YouTube TV, Starz, Showtime, Prime, HBO Max, Hulu, Disney+, Paramount+, Apple TV+, Vudu, Peacock, Crackle, Pluto, Freevee, and maybe even a few other things I forgot. The only notable name you might notice I didn’t mention was Netflix. Unfortunately, like Halo+, Horizon Pro is not “Netflix certified.” This means the app can be opened and used, but no content can be played from Netflix. Before writing Horizon Pro off, it has Chromecast built-in, so you can simply cast it to Horizon Pro. There are also other ways to mirror your phone or device to the screen, along with 2 HDMI ports if you instead add a game console, Roku, computer, or a wide variety of other devices.

The actual on-device performance is pretty good if you want to keep things simple. Horizon Pro will quickly navigate menus and applications or just fumble around looking for something to watch. It’s good enough that I wouldn’t instantly suggest an external device, though if you plan on watching Netflix a lot, it helps.

Most of the settings are pretty typical for a “smart” device. You can calibrate it; there are built-in settings like Movie or Game and some toggles. While it features XGIMI’s MEMC technology, I found it best with the set-off or at least decreasing it outside of the box. It gave me a strong soap opera effect, but this will vary, and it’s always welcome as long as you have options. Beyond that, I found it enjoyable, even with the other picture settings on default.

The final feature I want to touch on is my favorite and arguably most valuable, auto keystone correction. What this feature does is incredibly simple. While Horizon Pro, like any projector, throws the full image forward, there will be several considerations. These include location, how the projector is positioned, screen size, other objects, and more. Keystone correction allows users to reduce the size to match any given situation. Having done this on XGIMI’s original Halo, it’s incredibly tedious and can take a while. With auto keystone correction, Horizon Pro will do it in seconds. Having used this quite a bit, I can tell you it works extremely well most of the time. The only surface that gave me issues was this fleece board used for pinning current projects. Your average screen, painted wall, or even painted paneled wall shouldn’t give you a problem. This is also a great feature for someone who plans on moving the projector, as any change will result in it needing to be corrected for the new situation.

The visual quality is very excellent. Even compared to Halo+, it’s a significant step up, something you can attribute to the 1 billion colors and 2200 ANSI Lumens. How well it looks will vary depending on the content you put on there.

Things like your average sitcom, reality TV show, or basic program should look similar to how they would on television. XGIMI’s X-VUE 2.0 Image Engine helps these pictures shine, though compared to a more excellent tv, it comes down to liking how a television looks or the more cinematic look a projector offers. I found myself wanting Horizon Pro was movies or series shot similarly, such as an excellent drama on HBO, Marvel, or Star Wars on Disney+ or something in the same ballpark.

This is another one of the main benefits of a projector, which is capturing a similar experience to the movies themselves. It’s so much nicer than it quickly became my preferred way to watch movies at home. It didn’t matter if it was something more excellent like The Black Phone or Chip ‘n’ Dale: Rescue Rangers; Horizon Pro captures that experience at home. I am shocked to say that about The Black Phone, as projectors can be hit/miss when it comes to contrast. Some go a bit too extreme, causing scenes to look incomprehensibly dark, not unlike complaints about specific Game of Thrones episodes, with others leaving the room washed out and ruining a lot of the suspense.

XGIMI Horizon Pro Remote Next to the Halo+ Remote

Gaming wasn’t a significant change between mediums. It retains that aforementioned cinematic feel, which will have a different impact depending on what you play. With Destiny 2 it can make an intense raid feel a little nice, helps a lot of the recent AAA narrative-driven titles immensely and is perfect for group experiences. It worked best with Nintendo Switch titles like Mario Kart 8 Deluxe, Super Smash Bros. Ultimate, and things of the like. They’re the type of experiences that people love to play with, and getting that on a picture up to 150″ is a fantastic experience for all.

This versatility also helps it stand out in a wide variety of ways. Given that it just needs power, I’ve brought it to a work function to help with entertainment, which was a huge hit. It would also allow many options for a smaller room, like a dorm, to play together or watch shows/movies without worrying about television setup. Something that a Steam Deck, Mini-PC/Laptop, Nintendo Switch, and so forth fit perfectly with.

Finally, I wanted to briefly touch on audio. XGIMI partnered with Harman Kardon to help the audio experience, and it’s pretty good for a projector. I would say it’s around what you’d expect from television, with placement not making a massive difference in performance. I leave Horizon Pro on the other side of the room, typically with the in-built speakers, and have no complaints about that experience. That said, I would suggest anyone looking to use this as their primary viewing device should invest in some kind of audio. As previously mentioned, it has the typical audio connections you’d find on television, a choice that offers countless options. However, you could use Bluetooth if a slight audio delay is not a problem.

XGIMI did a fantastic job with Horizon Pro. Not only does it perform exceptionally well for the price, it has a beautiful feature set that makes it an appealing alternative to television. Not only does it boast Android TV, but it also has traditional audio solutions in a size that is not too bad to transport to a work function, school, outdoor party, or even another room in the house. For these reasons and more, we’re happy to give Horizon Pro an Editors’ Choice award and think it’s worth considering if you want a larger screen, have limited space to work with, or just want something that can quickly work in the house or outdoors.

[Editor’s Note: XGIMI Horizon Pro was given to us for review purposes and was reviewed on a generic/low end white screen.]

Auto keystone correction, quick boot and the ability to turn off the picture are all extremely handy in a number of situations

Extremely easy to use on the go, in the house or outside with friends/family

Doesn't require external sound, but has plenty of options if you choose to

Not the best in heavy light