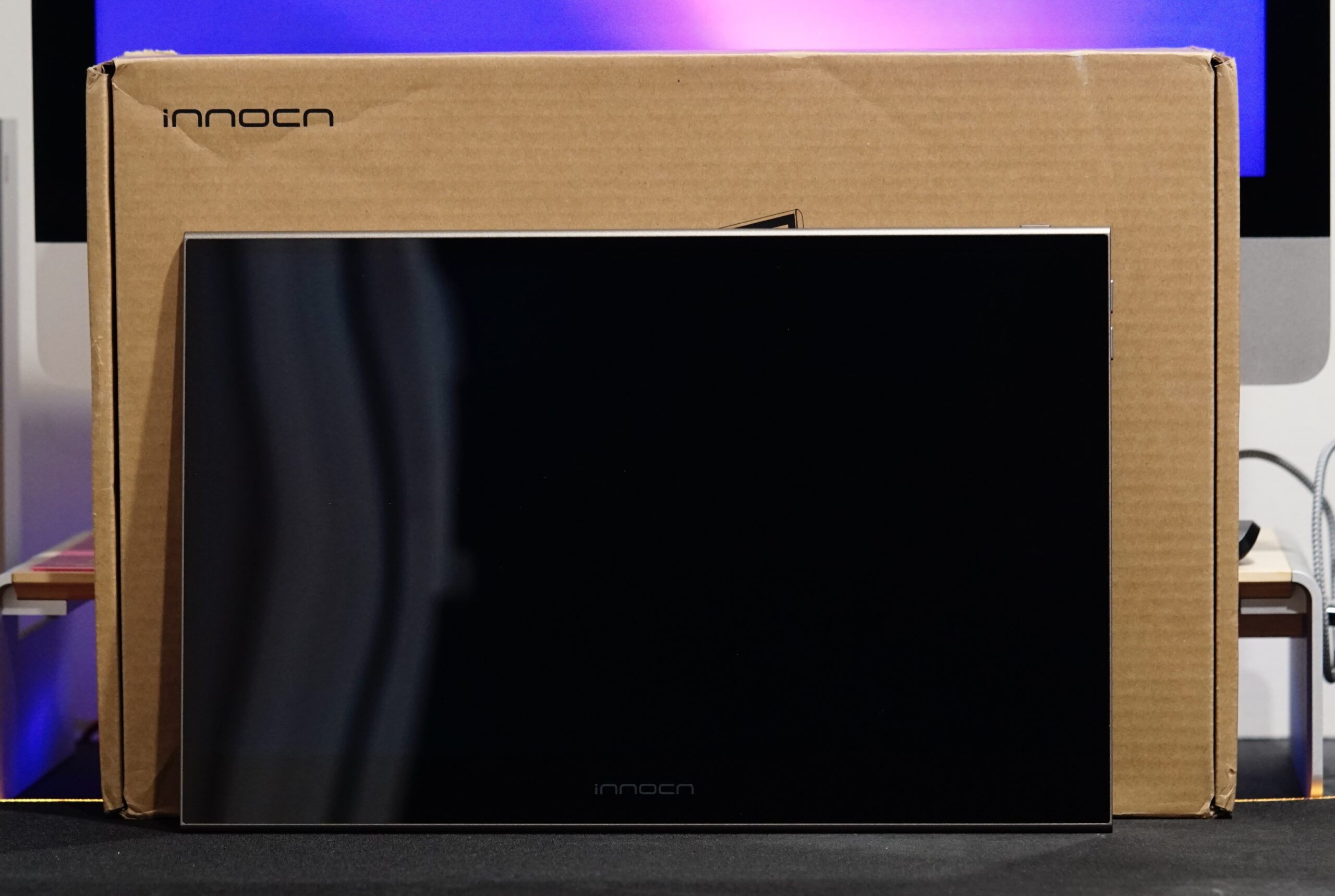 Back when I sold displays there was always a frustrating element to tiers. Most brands kept features in a linear progression. Some years the tiers changed, like now HDR/color is more common as the first step up, with full array/OLED being among the last, though it made it hard to really find the perfect product.  Most times it was going to the extreme or settling for less. So far I’ve had the pleasure of experiencing two of Innocn’s initial offerings. Their battery-powered 1080 portable monitor and the non-battery-powered model. With their next step up being 4K OLED, it can be a lot to ask, even though I don’t doubt it’s worth it, a problem Innocn’s latest, 15K1F hopes to solve. Instead of having all the features found on the higher tier model, 15K1F gives an OLED display for a small incremental upgrade. With some hits thus far, does 15K1F offer a great experience or does it fall into a weird place?

With 15K1F, Innocn has gone in another direction with packaging. Instead of using an outer box to protect a smaller inner one or just including the inner box itself, 15K1F comes in a rather typical brown box. It wouldn’t look out of place as a computer box or other items you probably won’t see displayed on a retail floor. There is some general information about the product, along with some nice images to make it easier to understand.

Inside is the product itself, along with a separate box for the case and a document for color accuracy. Beyond that, there are the typical accessories we’ve seen with other Innocn products. These include two USB-C cables, a 45W USB-C power adapter, mini-HDMI to HDMI cable, and documentation, though no cleaning cloth like the others.

While it features a “smart case” like PF15-Pro, this looks to be an updated version of it for 15K1F. Instead of using the three-fold design, Apple made popular with their smart cover, it’s a multifold design that feels a little sturdier and raises the display slightly higher or lower depending on the configuration. It can be a little tricky to use at first but I would say I prefer this design more. Not only does it look unique, it makes certain configurations work better and has a better display for the angle. The sides also lack the matte finish found on the PF15-Pro case, something that I think looks nicer, though it will make it stand out more, gives it a different feel when you hold it, and will need more attention cleaning than the matte finish.

As for the display itself, there is nothing too different from PF15-Pro at first glance. It’s marginally smaller, a mere couple fractions of an inch, which doesn’t seem like much until you have them next to each other. It’s just enough where it could conceivably fit into my desk organizer if it was slightly longer, something no other Innocn model can do. It also features a different color of the metal. I’d say PF15-Pro and N1F Pro both feature a decided space grey color, whereas 15K1F is closer to champagne. Due to the case, you might not even notice there is a difference, as roughly 90 percent of the metal will be covered at all times. Finally and most importantly, it’s 1.6lbs, making it almost a pound lighter than PF15-Pro. This makes it easier to transport, use or just move around.

Given we’re pretty experienced with Innocn monitors by this point, it took seconds to get all our devices working on 15K1F. For most, it should be plug and play, though you might have a quirky product. For example, the Chromebook X2 that is featured in some of the images only works with the display if the keyboard is attached. Gaming systems, computers and even Apple products should just work instantly. It might take a little setup, like any monitor does, though nothing special.

Like their other displays, 15K1F will not accept an HDR signal, is 60hz, and a 1080p display. Also, while the Amazon listing pegs it at 10bit, the product manual says it’s 8bit+2FRC. It shouldn’t make a difference to the vast majority of people, though something to keep in mind.

For better or worse, 15K1F came at an interesting time for us. Not only did some extremely high-quality games release, like Elden Ring, but some of these are also exceptional looking like Horizon Forbidden West. This made it really easy to get a gauge of the overall quality and it’s really a testament to the quality of OLED.

Having used an OLED television for years, the benefits were immediately obvious. While all the monitors do exceptionally well for 1080 due to a fairly high PPI, 15K1F was, without question, the nicest looking. It didn’t matter if I threw Elden Ring’s sunny landscapes at it or a dark night in Horizon Forbidden West, it was able to perform extremely well. Where it made the biggest difference was honestly Destiny 2’s Vow of the Disciple raid.

With the raid itself having a lot of strong contrasts, it felt about on par with my television. Where this would honestly make the biggest impact is a way to enhance an older Switch. With OLED giving the main benefit of the latest model, it’s a bigger size and great for playing with others or just watching something on the go. It instantly became my go-to monitor, with the color accuracy and details easily being worth the additional ask.

Unfortunately, as I touched on earlier, it does come at a price. Innocn did not include touchscreen functionality with 15K1F. It won’t help anyone with gaming, though could’ve been a selling point for anyone hoping to use it that way with a PC. It also features the same speakers on the side set up as PF15-Pro, which is simply not as nice as N1F Pro’s front-firing design. That said, they do work fairly well given the size. The case also doesn’t offer as many options as N1F Pro, though as previously mentioned it does offer more options than PF15-Pro.

It’s honestly hard to find a fault in 15K1F, especially when you look at similarly priced options. Not only is it a great display for gaming, thanks to the 1ms input lag and beautiful OLED design, but it also has a lot of other benefits for different devices. The only real downsides being the lack of touchscreen functionality and battery. If this isn’t a deal-breaker, I would gladly take this for working on photos, really experiencing the Switch, or just playing games with friends.

[Editor’s Note: Innocn 15K1F was provided to us for review purposes.]

Great case for taking it on the go

Great price for the feature set

Lack of touchscreen will not appeal to everyone

Mini-HDMI limits ease of use

Lack of HDR prevents it from checking every box