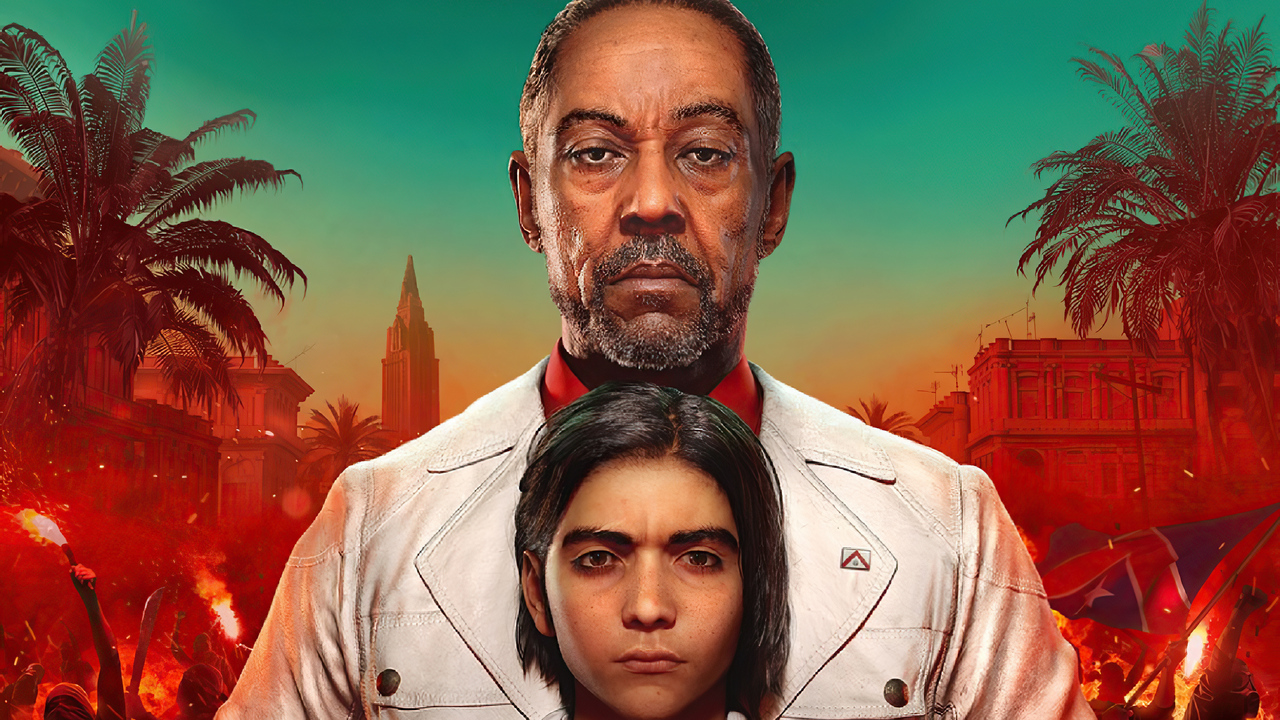 Far Cry began its life in 2004 as a first-person shooter contained within a lush tropical environment sporting a mutant-filled narrative, feral abilities, and dual wieldable weapons. Four years later, Far Cry 2 landed on the scene, notably changing up the tone and pacing of its predecessor. The savage feral uppercuts and colorfully vibrant locale were swapped for a malaria-afflicted mercenary and the arid brown landscapes of Africa, both of which were highly susceptible to the rampaging fire mechanics. Another four year jump ahead and we land at Far Cry 3, the installment that set the framework for all future entries. It’s a blueprint that Ubisoft has only made minor tweaks to over the past decade, opting to continually double down on their design rather than drastically overhaul the structure as the developer did in the franchise’s earliest years.

Far Cry 6 continues the trend set by Jason Brody’s 2012 outing, proudly flaunting the formula that brought the IP much success since its implementation. While the game is clearly bound by a repetitive pattern, it manages to remain fun. And, possibly more importantly, it manages to elevate itself beyond the bland and forgettable Far Cry 5. With Far Cry 6, you are getting the best Far Cry game since Far Cry 3, but it’s likely due to how much it harkens back to the 2012 title. You will be performing the same tasks in the same ways as you have for the past several years, meaning the experience is largely a familiar one, but that doesn’t strip Ubisoft’s newest iteration of its enjoyment.

Far Cry 6 sweeps us away to the gorgeously vivid island of Yara, a fictional stand-in for Cuba. Anton Castillo, brilliantly portrayed by the likes of Giancarlo Esposito, sits as the ruthless dictator controlling the island. The merciless antagonist seeks the elimination of “Fake Yarans,” while pushing “True Yarans” to aid the development of his so-called paradise, primarily through the goals of globally distributing of a controversial cancer drug called Viviro. When not crushing rebellious citizens, Anton is imparting his harsh ideals and methods on his son Diego. The dynamic between the two is captivating, as the young child is forced to partake in heinous acts at the demand of his father.

And then there’s the protagonist: Dani Rojas. Recently turned guerilla, a term wildly overused throughout the game, Dani embarks on a bloody journey to dethrone the oppressive rule of Anton Castillo. The opening moments of this story are among the most powerful, alluding to a gritty and grave portrayal of the political strife spanning Yara. But that allusion quickly disperses into Far Cry‘s typical beats, which underserve the talent and opportunity present. Nothing about what is seen is terrible, simply unsurprising. That about sums up a majority of the Far Cry 6 experience. We have been here before many times. And while it still offers up a good time, it’s hard not to notice how little has changed over nearly a decade.

An expansive map houses multiple outposts to be claimed, treasures to be found, and cookie-cutter characters in need of assistance. The sprawling island of Yara certainly presents the best playground for Far Cry‘s long-standing gameplay loop, offering up a rich environment to set ablaze with molotovs and flamethrowers. The inhabitants of Yara are bolder than the revolting NPCs in Far Cry 5. The “Fake Yarans” want nothing more than to rid the island of Castillo’s regime, and they are willing to die for that goal. Often times the player will cross rebels engaging in firefights with Castillo’s military, sometimes even fighting hand-to-hand in a life-or-death struggle. Of course, Dani can jump in to lend support and gain followers for one of the guerilla camps established across the island.

Guerilla camps offer up a bit of light base building. Dani can use collected resources to erect new structures, providing services to the camp (such as a gun shop). Gasoline, medicine, and metal are strewn throughout the map and can be taken to bolster the capabilities of the budding guerilla combatants. If it sounds familiar, it’s likely because you recall doing something very similar in Ghost Recon: Wildlands, another Ubisoft game. While not completely engrossing, the guerilla base building does add to the sense of growing local forces and becoming a more cohesive unit. Leveling the bases also opens up better gear, giving Dani the opportunity to deck out higher tier weapons with different ammo types and attachments.

Far Cry 6 places gear at the forefront of its character development. Gone are the skill trees of previous games. Those skills are now tied to the clothing Dani wears. Do you want flames to immediately extinguish when Dani catches fire? There are gloves for that. Would you like extra damage reduction from those incoming bullets? An entire set revolves around injury protection. Mixing and matching or sticking to a particular gear set is up to the players’ preferred playstyle. For those still concerned with Dani’s fashion sense, there is a transmog system that allows item appearance to be altered without saying goodbye to those sweet perks. The style of the clothing is unique, too, reinforcing the fact that these guerillas must use whatever basic items are at their disposal to stand against the well supplied military soldiers.

Unlike the homegrown combatants rallying alongside Dani, the player has access to an exclusive piece of equipment. I’m talking about the Supremo. These jury-rigged backpacks can change the tide of battle. Dani begins with the Exterminador, which can launch several homing rockets. More stealth-oriented players can equip Volta for a surge of EMP goodness. Just like the perk-infused gear, Supremos enable the player to go all in on a desired approach or mix it up to be ready for anything. This is one of the areas in which Far Cry 6 is able to stand above the other entries. Supremos may not be the same as Jack Carver’s feral abilities, but they make it feel like Dani has superpowers nonetheless.

It doesn’t take too long for Dani to go from ill-equipped underdog to one-man army, as is typical for Far Cry. In an attempt to balance Dani’s growing prowess, the hostile forces of Yaran rank up as more territory is cleansed of militaristic control. The goal here is to keep the conflict challenging, but because of the aforementioned skill-granting gear and overpowered backpacks you likely won’t feel much of a sting from the heightened soldiers.

That statement becomes even more apparent when playing the game in two-player co-op. Like Far Cry 5, the entirety of Far Cry 6 can be experienced with a friend. Bringing along an extra gun is a great deal of fun whether playing the multiplayer-focused Operations or the main campaign. Stealthy outpost takeovers can be approached with a short range saboteur quietly moving through the area as a sniper provides overwatch from a nearby cliff. Or the duo can wreak havoc in a customized vehicle with an explosive turret. Better yet, each player can summon their own Amigo, an animal companion. The loveable wheelchair-bound dachshund, Chorizo, can distract enemies, whereas the tanky crocodile, Guapo, can tear them apart. Co-op partners and Amigos are easily among the best components, both of which allow the madness to reach new heights.

Far Cry 6 is a familiar yet fun outing for the franchise. What Ubisoft has crafted generally fits within the confines of the blueprint first put into place in 2012’s Far Cry 3. There isn’t anything inherently wrong with the formula, other than evoking a “been there, done that” feeling. Far Cry 6 gives us our best setting in recent memory, blowing well past Far Cry 5‘s muted Montana environment. The gunplay is punchy, map exploration yields plenty of side content, and character building has received a slight shakeup (although not entirely revolutionary). For everything it gets right, Far Cry 6 remains predictable in its adherence to the framework of its predecessors. Furthermore, Anton Castillo and his dictatorial tirade against the rebellious citizens of Yara feels like a missed opportunity to explore the themes and events on a deeper level, possibly even being bold enough to say something of note on the matters depicted. What we’re left with is a by-the-books Far Cry game that excels at everything it has done before without venturing too far from its comfort zone.

[Editor’s Note: Far Cry 6 was reviewed on PC and a copy was provided to us for review purposes.]

Chorizo is the goodest boy