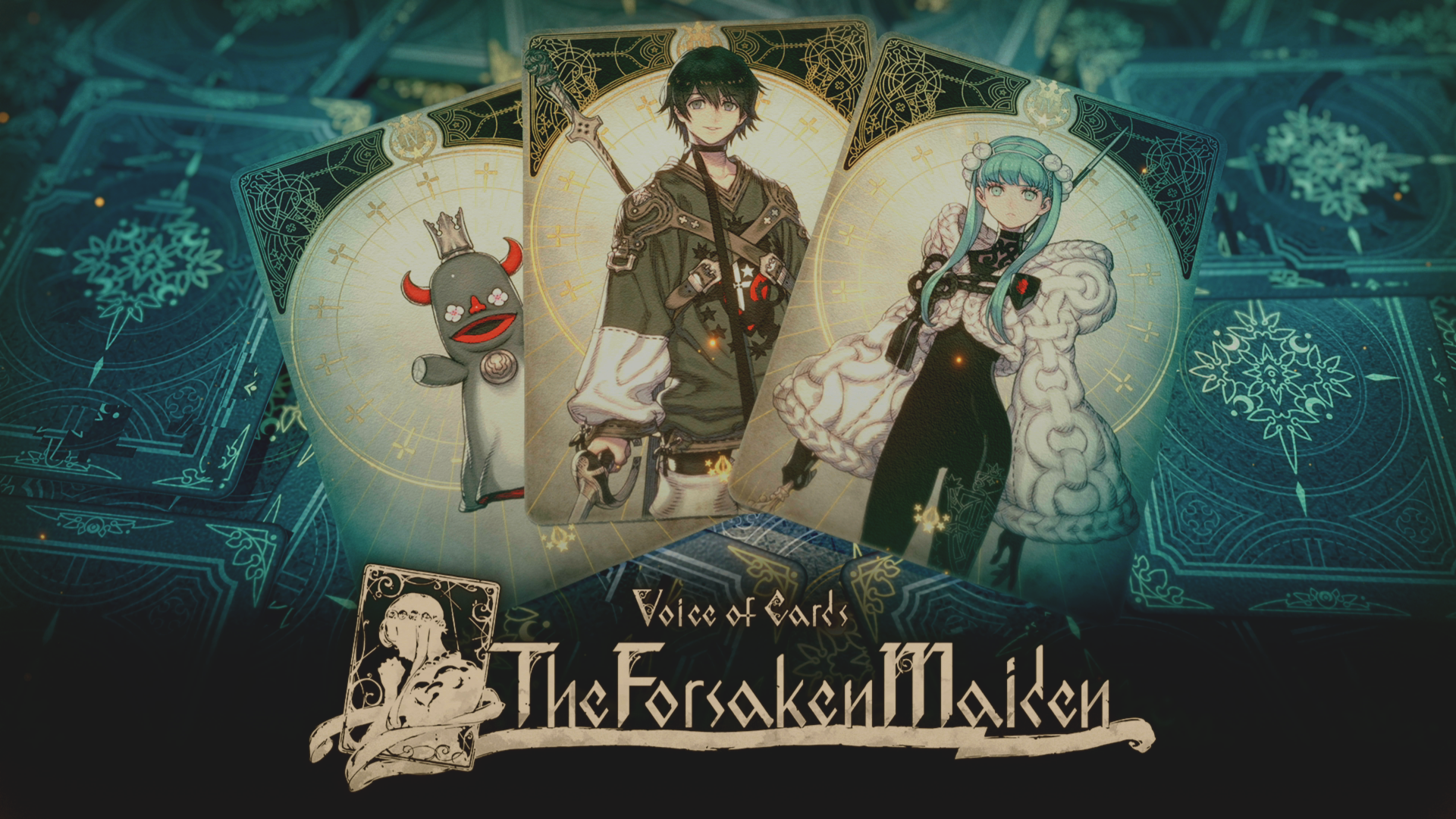 Square Enix surprised everyone when they announced Voice of Cards: The Forsaken Maiden a couple of weeks ago. With the first title releasing a couple of months prior, the unexpected sequel had fans wondering what the new experience would be like. With the cards on the table, is Voice of Cards: The Forsaken Maiden an improvement over the original or would it have been better off waiting a couple more months?

In Voice of Cards: The Isle Dragon Roars, Todd Haberkorn handles narration. His slightly cocky voice is perfect for characters like the Drifter in Destiny 2 and gives the adventure a slight flare, not unlike Destiny 2‘s divisive PVEVP mode, Gambit. Here, Mark Atherlay takes control of the game, giving the experience a more passive or neutral vibe. Upon hearing his voice, my first thought was how similar this and Nintendo’s Directs are. While I personally prefer Haberkorn’s approach to the concept, it is very reminiscent of how every game master has their own approach, with both tone and style.

The Power of Teamwork

This concept extends to the narrative as well. Instead of having a morally grey character deal with complex concepts like morality, the player character is far more empathetic to those around him. In this adventure, players need to help Laty, the village’s maiden who lost her ability to speak and is clearly troubled by things beyond her control. To mend her heart, you’ll need to find the other maidens, fight for Laty and overcome a series of challenges that stand in your way.

It makes for a more compelling tale, as those familiar with the genre norms will likely see where the road is going, but it’s also predictable. In some cases I would argue Voice of Cards: The Forsaken Maiden uses this to its advantage, though this only works if you know where the story wants to take you. Without that piece much of the adventure will fall short, either due to an underwhelming reveal or not caring for the narrative.

One of the Surreal Sections

That said, the scenes in where you heal Laty’s heart are weird and wonderfully surreal. Even if they eventually lead to rather mundane things, every section has a distorted world to explore with unusual concepts or weird explanations. It works because the logic is there, without being so complicated there needs to be a grand explanation for it.

Voice of Cards: The Forsaken Maiden shuffles the deck when it comes to gameplay as well. The core concept is unchanged, with some slight changes to flow. If you’re unfamiliar with the previous title, Voice of Cards: The Forsaken Maiden is a turn-based RPG that resembles a card game. Instead of having an MP system, there are tokens given at the start of every turn that allows for the use of certain attacks. More powerful ones have a higher cost, with less powerful or luck-based ones having a lower one. Skills with a chance to do something or have an additional effect are determined through the roll of a die or dice.

Most fights in Voice of Cards: The Forsaken Maiden are determined through smart tactics and area of effect skills, instead of just overwhelming enemies. There is a slight learning curve, especially once link cards, a new option that requires a high amount of tokens in exchange for a powerful two-character attack, are added, though most of the time it’s pretty straightforward. With fewer options for equipment, there is a stronger focus on fundamentals, such as using straight damage cards to circumvent high defense enemies, though other flaws old it back.

Despite featuring the improved game speed and other quality of life additions, Voice of Cards: The Forsaken Maiden is filled with dead space or tedious sections. Doing anything without a quick move is a surefire way to end up in multiple battles. Just exploring the water for the next objective might result in another 10 battles. Most aren’t even that difficult, as there is such a small enemy pool. I can select high damage skills or gauge how much an area of effect attack will do and determine how to overcome each and every challenge.

Some of the puzzles are the same way. None of them are difficult, often leading to overthinking them, with their inclusion slowing things down even further. Thankfully, the gameplay loop doesn’t change much between areas, meaning once you know what is expected you can speed the process along.

Even if these are some negatives, I still applaud Voice of Cards: The Forsaken Maiden for finding a nice balance between new and old. Venders, certain characters and a few enemies return, with the new locations and mechanics bringing their own unique content. These include events, optional activities where players are rewarded or punished based on how they respond, and even the optional card-based mini-game. It still plays like Gin Rummy, just with some different effects that change the flow.

Voice of Cards: The Forsaken Maiden greatest strength is a great understanding of the things it’s referencing. Instead of shuffling existing content around a new story, everything is changed to suit a new game master’s design. As a result, it feels different enough, with its own unique advantages and disadvantages that might better resonate with players. Unfortunately, it doesn’t fix everything wrong with the last release, and in some cases breaks things that work, but the final product is enjoyable.

[Editor’s Note: Voice of Cards: The Forsaken Maiden was reviewed on PlayStation 5 and a copy was provided to us for review purposes.]

Voice of Cards: The Forsaken Maiden

A little darker than the previous adventure

Some external elements are not as robust

Can feel tedious and grindy