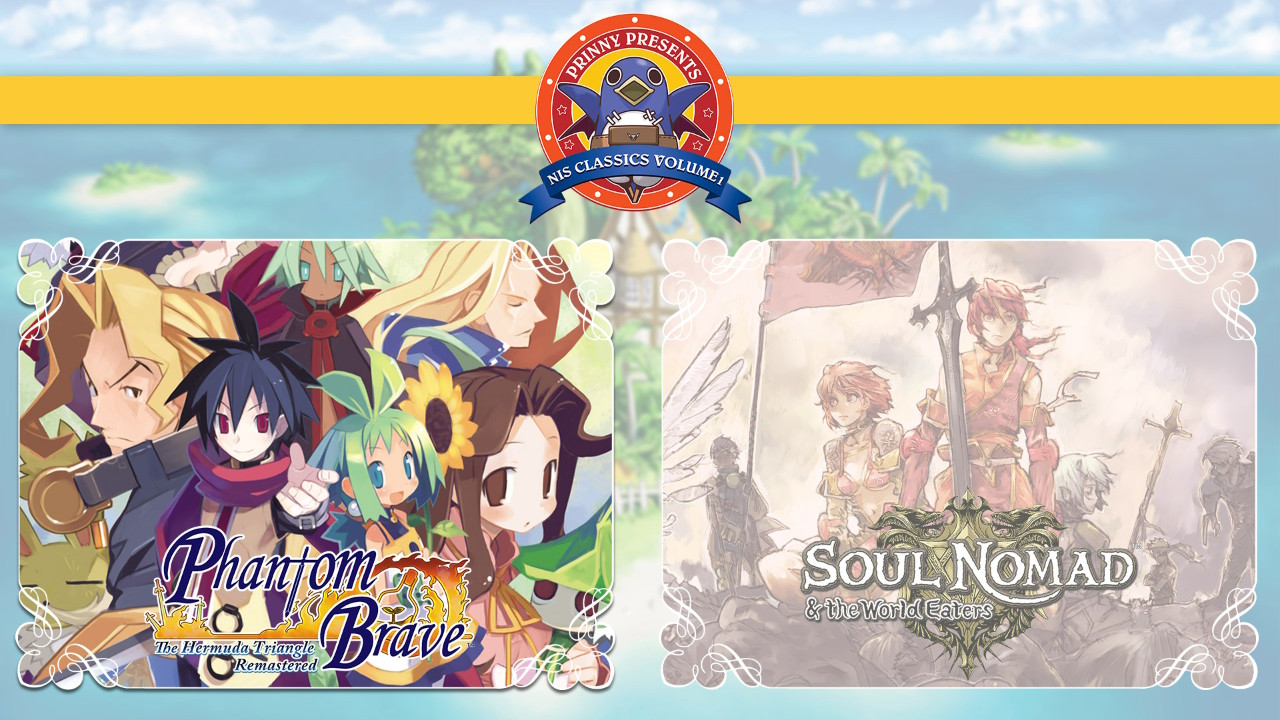 One of the hardest parts of always moving forward is missing references to the past. Long-standing series, be it television, manga/anime, novels or even games often reference the past, even if finding the referenced material is hard. Nippon Ichi Software has been doing this for years, though many players no longer get the references. This is what made Prinny Presents NIS Classics Volume 1: Phantom Brave / Soul Nomad so exciting. While Phantom Brave has seen its fair share or ports, Soul Nomad has been reduced to that game Gig is from. With the hope of exposing a new generation of gamers to these experiences, are they worth playing or is it better off remembering a small fraction of them?

Phantom Brave starts with Ash, Haze, and Jasmine fighting for their lives on a mysterious island. Their situation is grim and concludes with the trio falling in battle. In a last-ditch effort, Haze invokes his power and is able to bring Ash back. However, he could only bring him back as a phantom. He is then tasked with protecting Haze and Jasmine’s daughter, Marona.

After a brief jump, we see Marona is getting ready to see the world we’re introduced to their dynamic. Despite losing her parents and her unique gift leading to her being ostracized, Marona is happy, hopeful, and compassionate to those around her. By contrast, Ash is weighed down by his past and wants to impart certain lessons to protect Marona in his own way.

While the story itself unfolds in a very Nippon Ichi Software way, it’s absolutely an adventure worth exploring. It handles the sad tones and hopeful nature quite well and it’s really no surprise this tale has been revisited multiple times.

As for Soul Nomad, it’s a stark contrast to Phantom Brave’s more grounded approach. This adventure begins with a brief explanation of the history of the world. Essentially, the world was peaceful until a powerful being and his World Eaters started a war. With unfathomable power, nations started to ally with them until a decisive battle resulted in the being’s death and the World Eaters going silent.

Centuries later, after training, you’re given a mysterious sword that has the soul of the powerful creature from the past, known simply as Gig. The larger-than-life character attempts to take control of your body, but due to having an unresolved business, forms an uneasy alliance with you. He will give you the power to fight the upcoming battle against the World Eaters, but all power comes at a price.

Even if these games and Disgaea explore different thematic elements, they’re still turn-based tactical RPGs. However, that doesn’t mean they don’t have their own approach to the concepts.

In Phantom Brave the approach is very similar to Neptunia. Characters can freely move around an area, with attacks limited to various ranges. As for Soul Nomad, it follows the grid approach, with combat sections having animations similar to games like Advance Wars. It makes combat feel a little more personal, even if it was ultimately left behind.

Since these are Nippon Ichi Software RPGs, they both feature a ton of depth and mechanics. There are classes, insane numbers, hidden endings, optional bosses, and delightful references. Some notable things being Laharl appears, in some capacity, in both games, Soul Nomad was the second game Asagi appears in and Phantom Brave finally revealed Pringer X.

Despite offering potentially hundreds of hours of gameplay, the port of Soul Nomad is a little underwhelming. With that being the main highlight of Prinny Presents NIS Classics Volume 1: Phantom Brave / Soul Nomad and the goal being more of a simple port, it looks and feels incredibly dated. Not only is it in 4:3, meaning the Switch will show black bars, it lacks some more modern touches and has a dated look. The same can’t be said about Phantom Brave though. That port is thankfully based off the later version that has additional content, tweaks and improved visuals.

[Editor’s Note: Prinny Presents NIS Classics Volume 1: Phantom Brave / Soul Nomad was reviewed on Nintendo Switch and a copy was provided to us for review purposes.]

Soul Nomad is a straight port

Can feel a bit dated next to later entries

Games to Look Forward to in September 2021