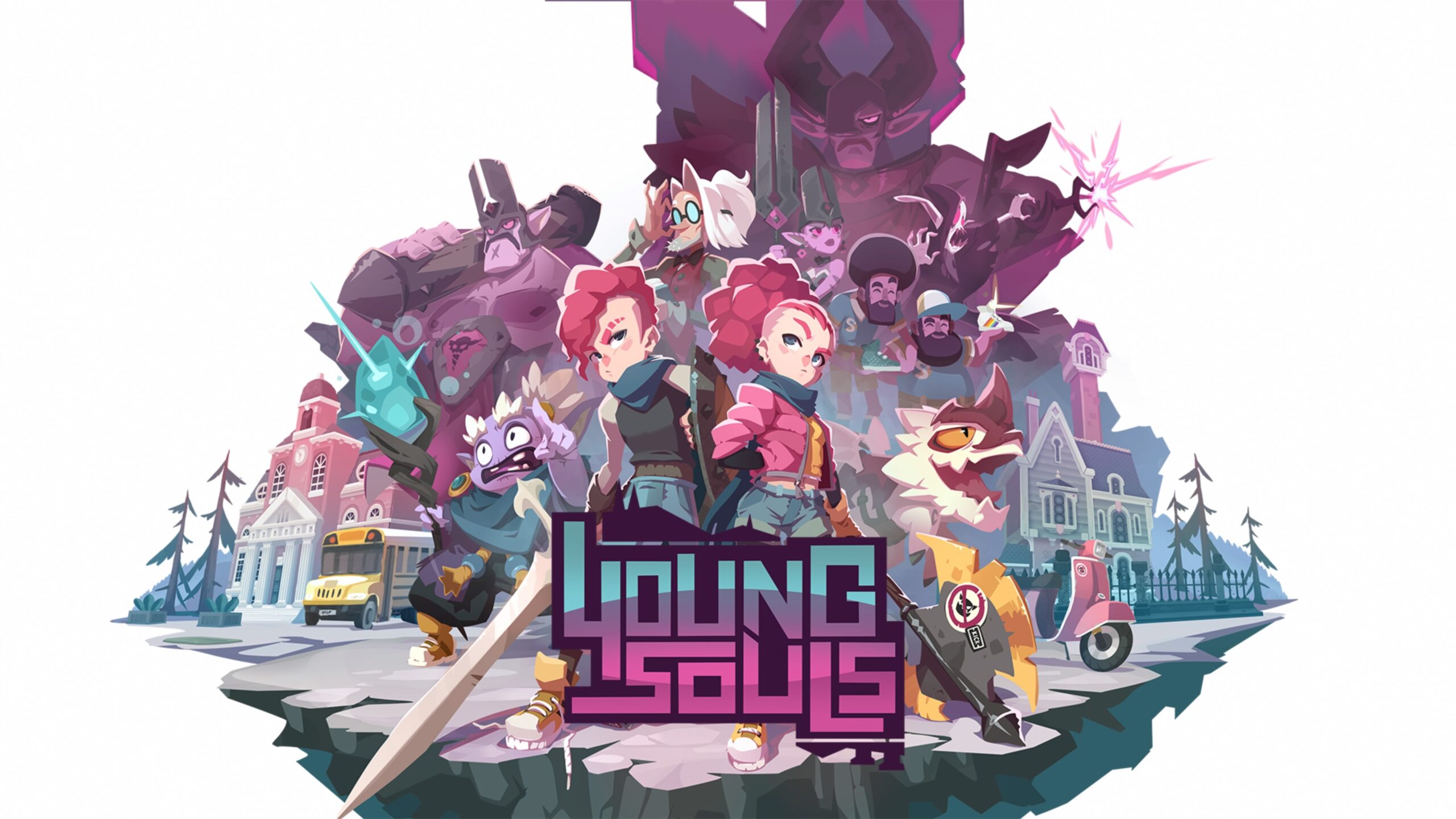 It’s an understatement to say the past month or so has been overwhelming. Horizon Forbidden West released, Elden Ring continues to dominate, Destiny 2 did a lot of good, Cyberpunk 2077 finally hit next-generation consoles, plus countless other top tier experiences. Still, there is a place for hopeful and interesting smaller games like Young Souls. The arcade-esque feel, cute interactions, and inviting art style make a strong case, but does it live up to the promise?

Young Souls starts sometime into the twin’s adventure. With goblins attacking, the twins need to defend their town and keep each other alive. Their situation seems grim when a powerful foe appears, one that threatens to kill the pair, before jumping back to the events leading to this situation.

An Example of the Type of Humor in Young Souls

The early story is more about establishing relationships and a sense of normalcy. Given players already know things will change, it gives these tension-free scenes an unsettling feeling that makes the introduction nerve-wracking. After visiting people in the town, someone broke into their house, stole the Professor, basically your father figure, with the mysterious door you weren’t allowed to enter is your only hope to save him and deal with the incoming Goblin threat.

After the initial moments, the story’s impact will vary based on what you want. Players who enjoy the lighter side of things will likely enjoy Young Souls, with those expecting massive twists and turns likely losing interest. Most of it is more interaction-based though. This means you don’t really need to know all the details, it just adds to the tasks at hand.

Gameplay is quite enjoyable. Not only does it have a beat ‘em up feel to it, but Young Souls also attempts to add to the experience in a variety of ways. Enemies, at least on challenging and above, have a fair bit of moment and will genuinely attempt to avoid taking hits. Sometimes this will result in getting baited or put in compromising positions, though they can often be overcome with a block, well-timed parry, or just dodging away.

A lot of the enemy types build on this design system. Even if some of the more annoying enemies are fast, there are far-reaching enemies, those who block or just wait to punish players. Unfortunately, you’ll probably lose from time to time, but each failure is an opportunity to grow. The level system gives stat points, there are gym tickets to further build each character, along with a wide variety of cosmetic and stat-driven equipment.

How Easy it is to Gauge Weight

One interesting mechanic is weight. Anyone remotely familiar with the Souls series knows how that works. Lighter characters move faster than heavier ones, which is presented rather overtly in Young Souls. Some players will thrive in manic combat, with others appreciating a more thoughtful approach. I wouldn’t say there is a right or wrong answer, often it hinges on how you want to play.

Those who like to parry and dodge will see more benefits in a heavier shield, whereas those who avoid that style of play will perhaps enjoy the speed boost of a lighter shield. There is no set option, if anything there are a wide variety of gear and options for each character.

Outside of combat is a rather quirky town to explore. Each of the members of the community has their own charm that makes interacting with them nice for clothing or just working out. It also makes their parts of the story a bit more interesting when you get to them.

For the most part, Young Souls is a fun action game. It has an arcade-like feel, a rather robust equipment system with a variety of stats and perks, plus an offline co-op. The story can feel a bit slow, though it’s more than made up for with snappy replies and genuine humor. Some might find the linear design or slow early progression off-putting but anyone who enjoys this style of game will likely get a lot out of their investment.

[Editor’s Note: Young Souls was reviewed on PlayStation 5 and a copy was provided to us for review purposes.]

Can be rather slow to start

Cutscenes won't appeal to everyone

How Long is Assassin's Creed Valhalla: Dawn of Ragnarok?