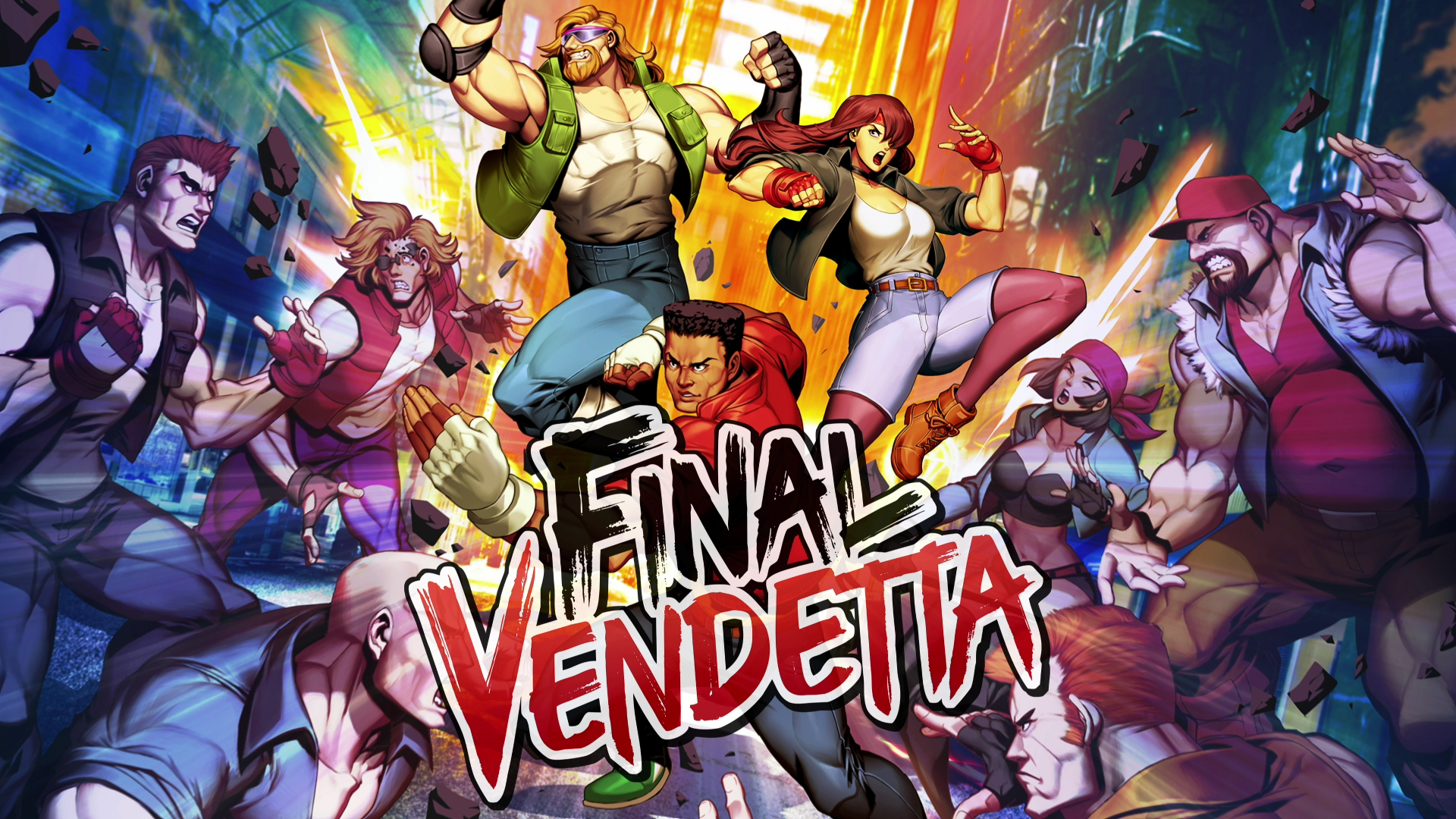 The beat ’em up genre used to be extremely popular in the arcade scene. They were incredibly simple to learn, easy to die and spend money on, and allowed for a large number of players to join in. As arcades died off, the genre didn’t get as much interest until rather recently. Streets of Rage 4 renewed interest in the genre, with several other games looking to try their luck. While Final Vendetta had the unfortunate timing of releasing against Teenage Mutant Ninja Turtles: Shredder’s Revenge, can it hold its own or are you better off going in another direction?

There really isn’t much narrative to Final Vendetta. Players are given a small introduction scene, it basically explains you need to beat some fools to save one of the main three characters’ sisters from an evil organization. It’s maybe 30 seconds long and it’s your gateway to fight on the subway, streets, dock a club, and the other ’90s mainstays.

A Brief Look at Every Playable Character

Almost immediately you can tell Final Vendetta was inspired by Streets of Rage. For example, Claire doesn’t look far off from Blaze and Duke looks like an adult version of Skate, with several of the enemies having a clear inspiration. This isn’t a fault, per se, it just hurts Final Vendetta‘s identity when it’s so reminiscent of another far more iconic thing.

Even if it looks like Streets of Rage, Final Vendetta tries to carve out its own niche by being the hardcore beat ’em up game. It isn’t a bad idea, just one that falls flat due to a wide variety of shortcomings, most notably length and approach.

Similar to older games, a fully successful run is about 30 minutes. However, you’ll likely not finish in a single attempt. Players are given a handful of lives, with another hidden on each stage, and no continues. So either you make it to the end or you restart. The unfortunate thing is that nothing is made simple for the player.

The most notable example of this is training requiring a fully successful run. Instead of letting players master the levels to successfully complete the game, training exists so players can work on their scores. Not only is this pointless for the vast majority of players, but the leaderboard also isn’t even ranked online. Heck, the scores are so low you can be number one on the arcade leaderboard without even getting to the first boss. These things, along with no online multiplayer and no drop in offline multiplayer (someone can’t join in the middle of a run), hurt the experience, with gameplay being just as dodgy.

Since this is meant to be a harder version of a beat ’em up, players are expected to take a more defensive approach. There is a block, which is extremely useful for avoiding damage, but it’s also kind of esoteric. Generally “strong” attacks, weapons, seemingly hits from behind and more will break your guard. There is a dodge as well, though it only goes up or down, not left or right.

Blocking is a Must

In addition to blocking, players need to learn how to attack. Even if there is a single attack button, there are super attacks, at least one “hidden” move, grabs, and an attack when enemies are down. There are also some mechanics that are not explained, such as using a super attack without full super decreases your health on hit, which can be a learning experience. Some moves are also rather dodgy I love the idea of kicking enemies when they’re down but the positioning can be hard to get right and several enemies attack when they get up making it a move I would just avoid.

Most runs, at least initially, will come down to learning all the gotcha mechanics. There are a lot of traps, often not working as you’d expect, along with weapons being rather underwhelming. Despite doing a lot of damage, they’re generally slower and far more likely to hurt more than help. All of these things combined make for a rather hollow experience.

Final Vendetta falls in the unfortunate place of having a good idea but failing to do it right. I don’t doubt there is a market for a hardcore beats ’em up, it just needs something more to stand out. Instead, it often feels annoying for the sake of being annoying. There isn’t a lot of fun losing health because you didn’t expect a shipping crate to crush half the screen or pick up a really mean-looking paddle that reduces your reaction time so enemies can easily get the best of you. Add in the short length, lack of modern features, and even underwhelming choices and it’s little more than an okay experience.

[Editor’s Note: Final Vendetta was reviewed on PS5 and a copy was provided to us for review purposes.]

Levels look nice and have their own charm

Rewards players who learn how to play, over how to punch

Short, even for the genre

No online leaderboard or multiplayer

No drop in multiplayer

Rankings are brutal, requiring a lot for anything about the lower rank