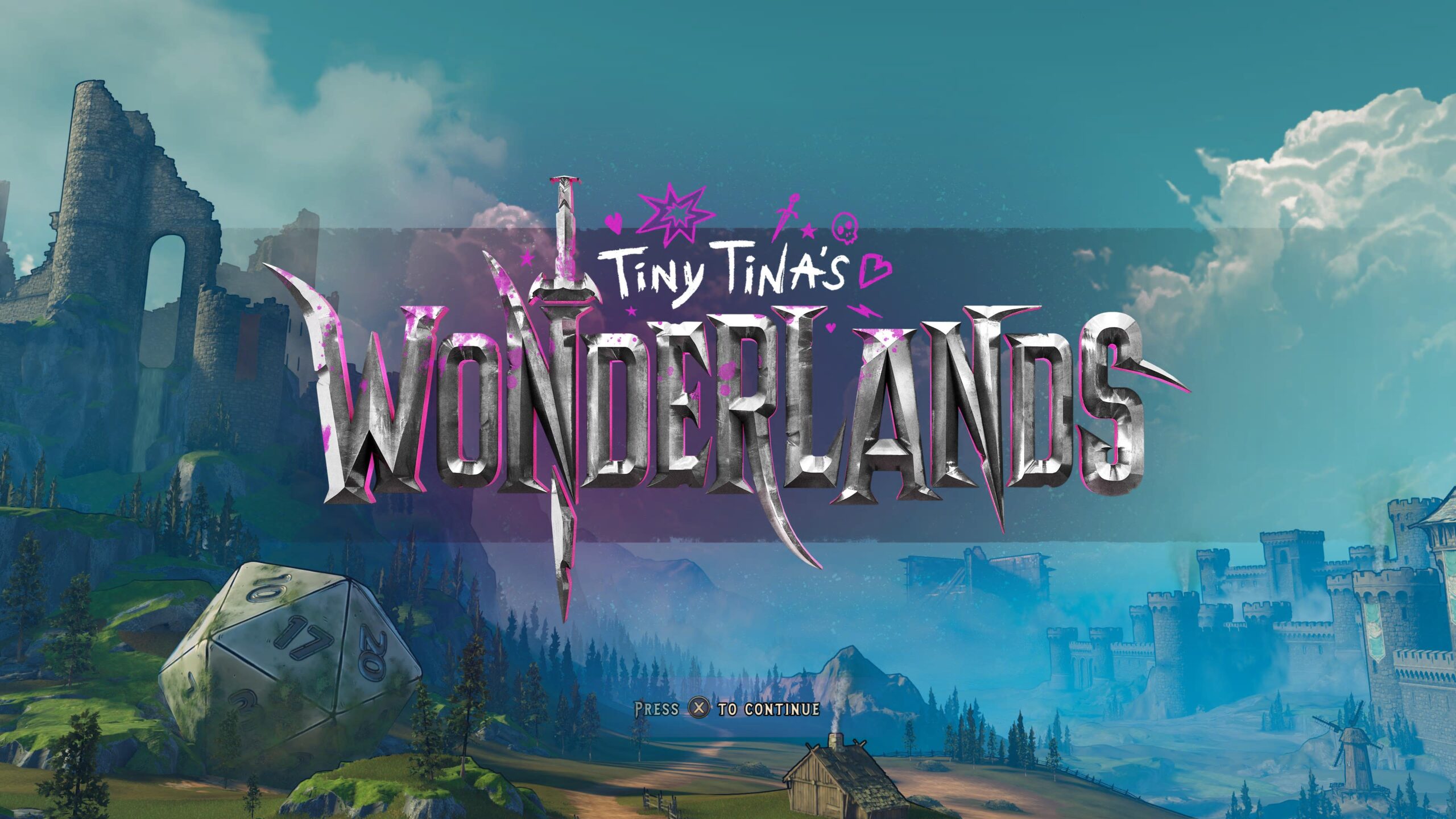 Spin-off games can be really good or extremely bad. At their best, they take what makes the source great and adapt it to another genre that allows new people to experience it, along with existing fans getting a new experience. Good examples of this are Persona 5 Strikers or any of the Mario sports games, but there are also terrible spin-offs that miss the mark in such a way it just makes everything worse. Given the reception of Tiny Tina’s now-iconic DLC and the divisive feelings about Borderlands 3, it makes sense to take the franchise in a different direction. The new setting allows for a different experience, without straying too far from the things that made Borderlands popular, to begin with. With the potential certainly there, does Tiny Tina’s Wonderlands capture it, or is it a new low for the franchise?

Almost immediately you can see the Borderlands charm. There is a brief cutscene filled with jokes, silly humor, and references to previous elements of the series. After the Dragon Lord, voiced by Will Arnett, it switches gears and a new campaign begins.

It starts rather slow. Players are set to receive a reward for their previous actions until the Dragon Lord takes control of the narrative and does the unthinkable. Due to this, players are motivated to defeat this fearsome enemy across a wide variety of settings. In true Borderlands fashion, the story often takes a back seat to rather silly humor.

Speaking for myself, it felt far more like I recall Borderlands 2 being than what appeared in Borderlands 3. Most of the jokes are characters making outlandish, though true to their character, remarks, or come from Tiny Tina attempting to control the game. It makes for a fun journey, even if the actual narrative is rather forgettable.

Before the journey begins, players must create a character and select a class. All things considered, it’s actually a rather robust character creator. While I wouldn’t say any character looks particularly great, the options absolutely match the Borderlands aesthetic of them being just slightly off. In addition to most of the usual options, an interesting option is pronouns for anyone looking for a more personalized experience.

Just One of the Various Classes

Unlike previous adventures, where characters had predetermined skill sets, players can select classes. Each one is based on what you’d typically find in a Dungeons & Dragons-esque story, with their actual value varying. Initially, it seems like a big choice, but it decreases over time. Not only do you eventually gain the ability to select a second class, which can later be changed, it just tweaks how you’d play the normal gameplay loop. With everything in place, you’re ready to start your quest to defeat the Dragon Lord.

Initially, Tiny Tina’s Wonderlands makes the most of the setting. Pistols turn into crossbows, I found some shotguns that used crystals, with a reload that was some variation of adding some kind of dust to them, with the differences decreasing over time. Eventually, you’ll collect more weapons, many of which don’t have the same sense of whimsy. Instead, there is a rather large divide between the fantasy items (spells/melee weapons) and guns, with both eventually suffering from the same issues as the main series.

It didn’t take long for me to question the sense of balance. In my experience, most items are either really good or bad, with a few in the middle. An extremely easy way to understand this is by looking at spells. One of the best spells I encountered was a calamity, a class of spells where a meteor falls from the sky to damage enemies. When I used the single meteor version, it was a clutch power that effortlessly killed peons and bosses alike. There is also a shower version, where multiple smaller meteors fall from the sky. Not only did I fail to consistently perform as well with the latter, it wasn’t uncommon for the spell to just outright miss.

A lot of items I found are like this. It turned loot from an exciting concept to almost immediately knowing what is and is not junk. I also found myself discouraged from experimenting, especially with shop purchases, as there are just so many underwhelming weapons. Melee also falls in a similar category.

Unless you’re built towards it, melee isn’t really an option. It’s slow, unsatisfying, with relatively poor damage.  Surprisingly, unless I was using it to finish off an enemy, it worked best to open items or cancel out long reload sequences (they often replenish ammo before the sequence ends). It’s unfortunate to say, though anyone who wants to experience that side of Tiny Tina’s Wonderlands has plenty of design, build and perk options.

Besides gunplay, Tiny Tina’s Wonderlands is broken up into two parts. There are typical Borderlands linear, but somewhat open, stages and a new overworld. It’s designed to mimic a gameboard, something it accomplishes, even if characters look rather ugly, though the experience is hit/miss. Progressing can feel tedious, with most locations or settings having an encounter with them. These are optional fights where players fight hordes of enemies in a small arena. There are also quests located here, often just going to a place and killing someone, or interacting with something on the board. Eventually, there will be nothing more than random encounters, a fun addition, even if most people will ignore them come to the end of the journey.

Levels make the most of the setting. They often have a bright color palette with some fun fantasy elements. These are often a blast to explore and overcome, especially when you run into a familiar face like Claptrap. The only unfortunate thing is enemy diversity is pretty low. There are like six sets of enemies, with each having a wide variety of types. It’s fun at first, just after a while it’s skeletons, pirates, trolls, crabs, or wyverns.

Post-game is in a similar place to the chaos stages. These are a cross between the aforementioned encounters, except there are some roguelike elements. When fighting enemies you can elect to increase the difficulty, grab buffs, complete challenges for more of the premium currency, and also take on negative modifiers that take some skill to overcome. This will appeal to some, with the only limit really being how much you care for the loop. At the end of the day, it’s the same experience with better loot that can be used to do a harder version of the aforementioned stages for even better loot.

One thing I do want to highlight is some technical issues. While I won’t get into the server issues that plagued the first couple of days, as I hope long term they won’t be an issue, Tiny Tina’s Wonderlands sometimes struggles, even on PlayStation 5’s performance mode. I experienced dropped frames, occasional brief freezing, and the occasional lag at certain spots. There were also a lot of weird glitches and quirks. I had images stuck on my screen, sounds repeat long after they should’ve ended, among other things. Some elements are also not as streamlined as they should be, such as finding your friend on the map takes a little more effort than it should. Ideally, these will be fixed, though are present in the current version.

Speaking for myself, Tiny Tina’s Wonderlands does enough right to be fun. It’s absolutely more enjoyable than Borderlands 3, it’s just a shame it doesn’t quite check every box. Those looking for more of the Borderlands 2 charm will likely find some enjoyment with Tiny Tina’s Wonderlands, with anyone who didn’t like those games likely feeling the same with this. Add in some neat guns, colorful characters, plus magic, and you have an experience that is good at what it does.

[Editor’s Note: Tiny Tina’s Wonderlands was reviewed on PlayStation 5 and a copy was provided to us for review purposes.]

New characters and their comments are amusing

Spells and classes have a lot of potential

Short for a Borderlands game

Performance is below what you'd expect

Where to Find Every Shrine Piece in Tiny Tina's Wonderlands

Sony Announces New Tiers and Changes to PlayStation Plus