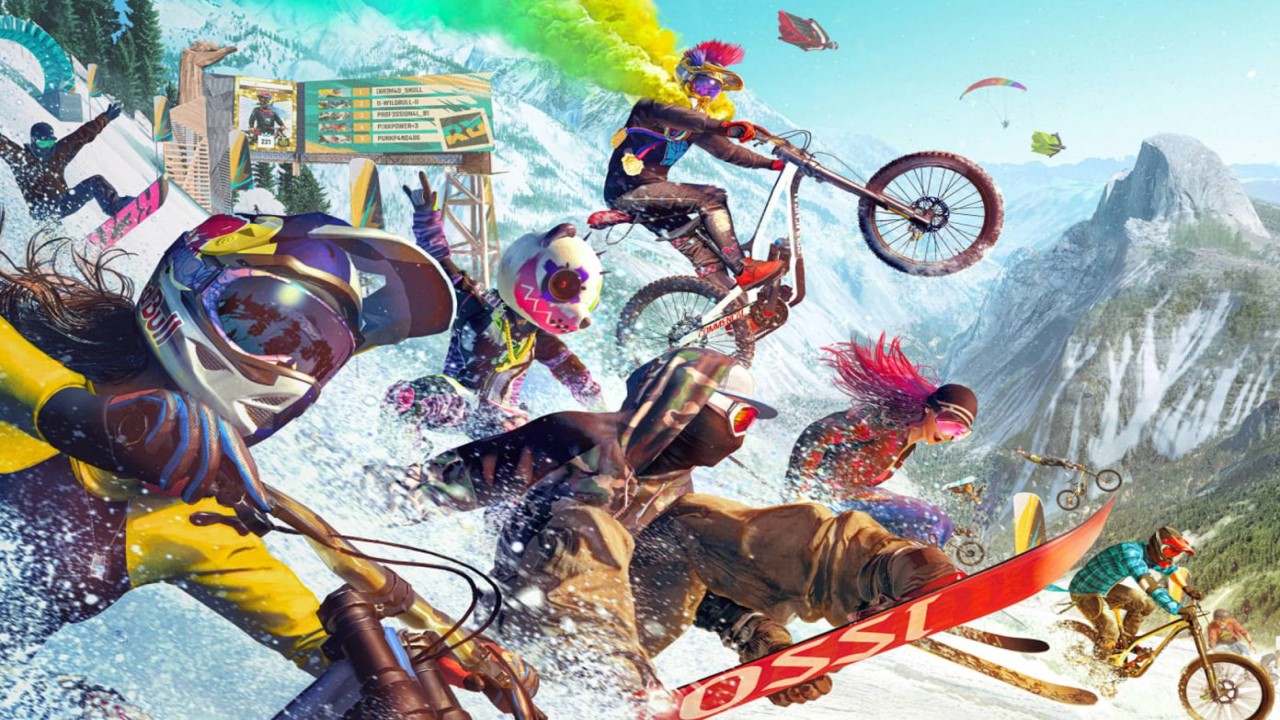 Riders Republic represents the evolution of Ubisoft Annecy’s previous extreme winter sports title, Steep, and meshes it with the extremely addictive formula embedded in the successful Forza Horizon series. In Riders Republic, events are no longer restricted to the skis, snowboards, and wingsuits; now bikes can take to the mountainous terrain spanning the sprawling open-world map. While ambitious, the end result mimics Playground Games’ magic with the same mixed result we observed in The Crew titles.

Riders Republic presents a vibrant, festive backdrop for the rowdy riders taking on various extreme events across the mash-up of stunning United States national parks. White, powdery slopes give way to dirt trail declines. The varied conditions offer enjoyable visual variety as bikes and boards are put to the test. Providing direction throughout the onslaught of competitions is an arguably unlikable cast composed of Monster™-fueled adrenaline junkies. The personas surrounding your rider’s rising career seem pulled from 90s stereotypes, making them feel more like animated exaggerations of the source material than endearing reflections of the extreme sports crowd. As the map is opened up and the events appear, the recurring characters will chime in with cringey dialogue that makes us eager to get back to roaming the map on the jet-powered skis to the hit-and-miss soundtrack.

Much like the tunes playing alongside the onscreen action, the racing itself has its highs and lows. Blazing down a rocky track on that newly obtained mountain bike (complete with a higher gear score than the old ride) can be an exhilarating experience. There’s a true sense of speed that creates the sensation that it could all go wrong rather quickly if a turn is cut poorly or a jump is taken at the wrong angle. Similar feelings are evoked from the wingsuit races as the player threads the needle between natural formations in order to hit those circular markers. Those longing for the glory days of Cool Boarders will likely find pleasure in the snowboarding and ski diversions.

The 64-player Mass Racers bring it all together in a hot-swapping X Games fashion. It’s frantic fun for online players to compare their racing prowess against something other than the AI. If extreme sports had a battle royale game, it would likely look a lot like this particular mode. Achieving the coveted first place position brings with it a tense thrill that is not found at such elevated levels elsewhere.

The core problem with many of the races is that the racing mechanics lack technical depth. If you often found yourself tediously tweaking every tuning option in Forza Horizon, you will be sorely disappointed at the ways you can lock in the win in Riders Republic. Staying ahead of the pack boils down to fewer factors. Grab your best ride, use sprint/boost (when available), and identify the ideal racing line. Inconsistent issues, such as riders randomly landing poorly and server connection errors, can work against the peaks of Riders Republic‘s flow.

Trick sessions fare slightly better, enabling players to get SSX tricky or emulate Mat Hoffman and Dave Mirra. This is especially true when opting for the manual control type, which turns off the auto-landing feature. Having direct control over the exact rotation of those flashy tricks makes the perfect landings all the more rewarding. That said, the trick races don’t necessarily require memorizing a slew of combos. Players can get by mashing away at the inputs and endlessly repeating the same stunts to pile up the points.

You should see a recurring theme in these paragraphs. On the surface, Riders Republic is an enjoyable blend of extreme sports strewn across a diverse playground. Races are speedy; unlocks come in droves, constantly offering up new content to engage with; and real-life players await the manic competition of Mass Races. But digging into the game’s stimulating events further reveals that the systems underpinning the framework are somewhat shallow. It’s an issue all-too-common with Ubisoft games; the game appears dense at a glance, but the resources are spent largely in the superficial aspects of the design.

Riders Republic is teeming with content begging to be obtained. Bikes, boards, skis, wingsuits, and more await the player, ensuring a steady flow of new rides for the endless string of races cropping up throughout the campaign. Taken as it is, Ubisoft Annecy has semi-successfully transplanted the Forza Horizon formula into an expansive map, one void of fast cars and instead hosting human-powered transportation. Upon further examination and scrutiny, the game reveals an untapped realization of its star rides. Riders Republic may be a successor to Steep, but it hasn’t notably shifted the bar any higher.

Vast and varied (if underutilized) map