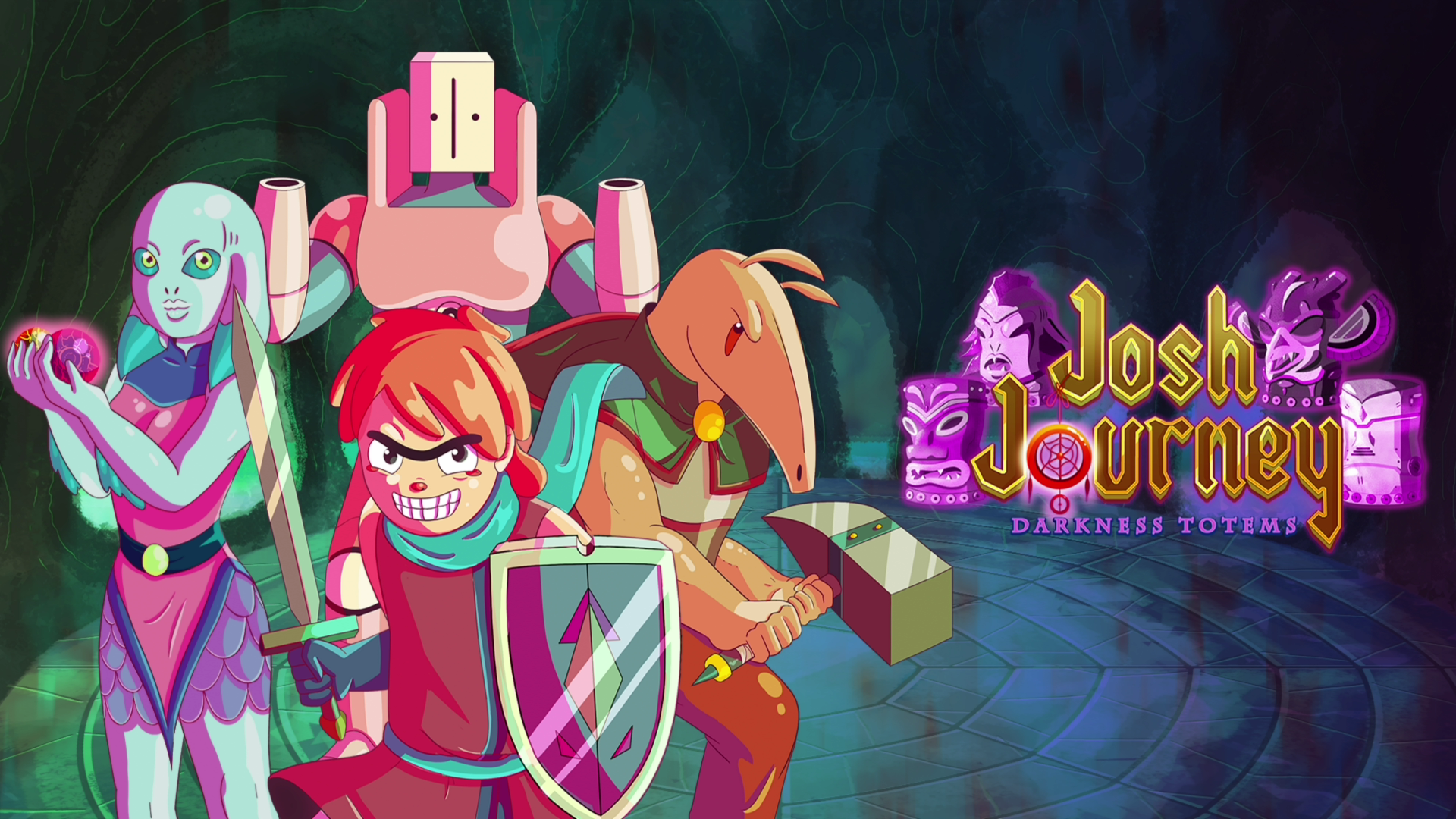 Seeing a new developer offer their take on an established genre is always exciting. This is part of the reason why The Callisto Protocol is so interesting. It could be the next big thing, do something unique that might inspire someone in the future, or just offer a traditional journey that is simply fun. This is the type of thought I had going into Josh Journey: Darkness Totems, a title that boasts hand-drawn art and uses iconic titles like Golden Axe as a base. With so much going for it, is this a journey you want to take, or is it best not to travel down the path of darkness?

Josh Journey: Darkness Totems has a relatively simple story that is primarily told at the end of each chapter. The four heroes work together to save the provincial world from a looming evil. Naturally, each hero has a stake in this adventure, as you go between their home area to rid it of the invading darkness and evil totems. There really isn’t much to it, nor is there any voice work, but there is just enough to get a sense of each character’s personality and the world around them. However, getting to see that world is an uphill battle.

The adventure starts with a rather exciting concept. You get to pick each of the four characters and can freely swap between them on missions. Defeated characters can be revived indefinitely, with several healing potions and other resources scattered around each level. Each character also has a specialty, reminding me of Castle Crashers and games inspired by it. The goal is to ultimately figure out how to deal with each threat, obtain resources, level characters, and defeat the bosses. On paper, it sounds great, as we’ve seen similar titles deliver unique experiences, yet Josh Journey: Darkness Totems gets almost every aspect wrong.

In my career writing reviews, I can only think of one game that was as imbalanced as Josh Journey: Darkness Totems, which was the infamous PlayStation Vita title Call of Duty: Black Ops: Declassified. As a result, this is a challenging game, which I’d put above Elden Ring and on par with Souldiers‘ highest difficulty (not NG+), with none of the previous titles’ positives.

Even on the first level, the problems are pretty apparent. The first enemies, these black creatures that look like something out of Courage the Cowardly Dog, will do almost everything in their power to get behind you to attack. It’s a common tactic for beat ’em up games, as it prevents players from overwhelming enemies with random attacks. Given their speed and desire, it will happen somewhat often. Initially, players have nothing in terms of defense, making it incredibly easy to lose health or even die to the first couple of enemies. If the first enemy doesn’t kill you, the second just might. This time you have a corrupted rooster person that swings a cleaver. They’re coded to make a mad dash toward players, which isn’t hard to counter, but the overall aggressive nature can be shockingly oppressive. It’s entirely possible for them to wipe your team by simply timing its attacks so you can’t actually avoid them. It feels incredibly cheap, and frustrating and it’s shockingly common in Josh Journey: Darkness Totems.

Dark Josh Punishes Anything Even Resembling a Mistake

Things go to another level when you encounter the first shadow boss. As you might suspect, the four totem bosses use a “dark” version of the character from that respective province. In typical video game fashion, the dark version is multiple times more potent than a maxed-out player character. As a result, players need to instead figure out the shadows, gimmick, defeat adds, and destroy the totem, which is a lot harder than it sounds.

What makes this fight difficult is how quickly things will go south. The only move that is remotely effective against Dark Josh is Melina’s dash. It will avoid his sword slice and can quickly get to him when he is winded. The downside is any mistake carries a massive penalty. For example, one of the most notable mechanics was his recovery. You can juggle Dark Josh, but if he touches the ground for even a moment, he will come at you with a slash that takes away about 50 percent of your health. To be honest, it isn’t too hard to avoid, except the ads will commonly get in your way, break your juggle, and Dark Josh will gladly punish. It isn’t fun, and it only takes one mistake to lose.

Part of what makes every boss battle a slog is how difficult it is to recover. Adds are unrelenting. Every boss summons them, and they’re a permanent part of the fight. Killing them will either result in them respawning almost immediately or you’ll lose all your progress while dodging the boss’s attacks. For many of them, they’re best ignored, and for shadow bosses, it only matters when the shadow is about to die since that opens the totem up for the damage. But it isn’t just the ads; it’s how revives work. It takes a considerable amount of time to restore a character, and unless you do it in the brief window after the totem is immune and the shadow is respawning, there is only one way to do it solo during a boss battle.

One of Melina’s unique skills is the ability to make an ice copy and use that to revive players. It’s a clutch ability that can save a run, but it’s also why Melina is the worst-balanced character in Josh Journey: Darkness Totems. She is hands down the best feeling, followed by Z.O.Z., though she is given a skill that discourages ever using her. It’s simply too easy to die, and she revive is the only reliable way to get a character back up, especially once you get to enemies that can kill you in a single combo.

All it Takes if One Mistake To Lose

Beyond bosses, levels can be extremely frustrating. Hazards can do a surprisingly high amount of damage, have bad mechanics, and are almost too punishing. I included a video above that shows an excellent example of what I mean with the lava teleport section of this stage. The issue is simple if you stand too close to the pad, it teleports, and if you miss the jump, you’ll die. I timed it with my phone’s stopwatch, killing Z.O.Z. with total health in 3.08 seconds. The video probably makes it hard to understand just how bad this problem is. For starters, missing the jump resets the lava stun, which took away about half of my health. This means even if you do it with total health, you only get one chance to recover per character. Now, the tricky thing is jump is the same button as revive. As a result, had any of my characters jumped immediately after the spawn, they would’ve attempted to revive their fallen friend and almost certainly died. This forces players to move, get to a good spot to jump, and make it out without their whole time dying. Now, admittedly I probably should’ve used the south path and Z.O.Z. died because I didn’t expect him to survive, which threw off my thoughts, but I’d be in the same position had a lot of other things not gone my way. In contrast, several other games would’ve just respawned me on one of the rocks (this only seems to happen when the location of death results in the ally being lost for that run).

Oddly enough, in the event you finish Josh Journey: Darkness Totems, there honestly is no reason to ever return. The campaign lacks any kind of score, be it time or points, nor is there seemingly any secrets to find. Even all the trophies/achievements can be obtained in a single run. Beating it also deletes your save, preventing you from redoing the game with a better build.

I am not sure if Josh Journey: Darkness Totems is balanced towards local co-op, something I, unfortunately, could not test, or having every power, but whatever the answer is, it does not make for a good solo experience. In addition, it lacks additional difficulties, meaning you’ll either overcome these challenges or give up, a concept that does not work in its favor. But, even if you like the poorly balanced and often cheap gameplay Josh Journey: Darkness Totems offers, it offers nothing else. The story is about 50 sentences long and is roughly 10 minutes of cutscenes, with absolutely nothing in terms of replay value. It’s just a mess that is frustrating and disappointing in every way.

[Editor’s Note: Josh Journey: Darkness Totems was reviewed on PlayStation 5, and a copy was provided to us for review purposes.]

No difficulty settings, with the curve being all over the place

Limited defensive techniques, which makes it incredibly easy to lose

Any mistake is met with excessive punishment

Certain commands are not reliable

Almost every mechanic and aspect works against you in some way

Characters do not have equal value, making Farquol worthless and Melina invaluable

Story is short and forgettable

No leaderboard or score of any kind

I don't believe there are any secrets or things to discover

Crash Bandicoot 4: It's About Time Spinning To Steam