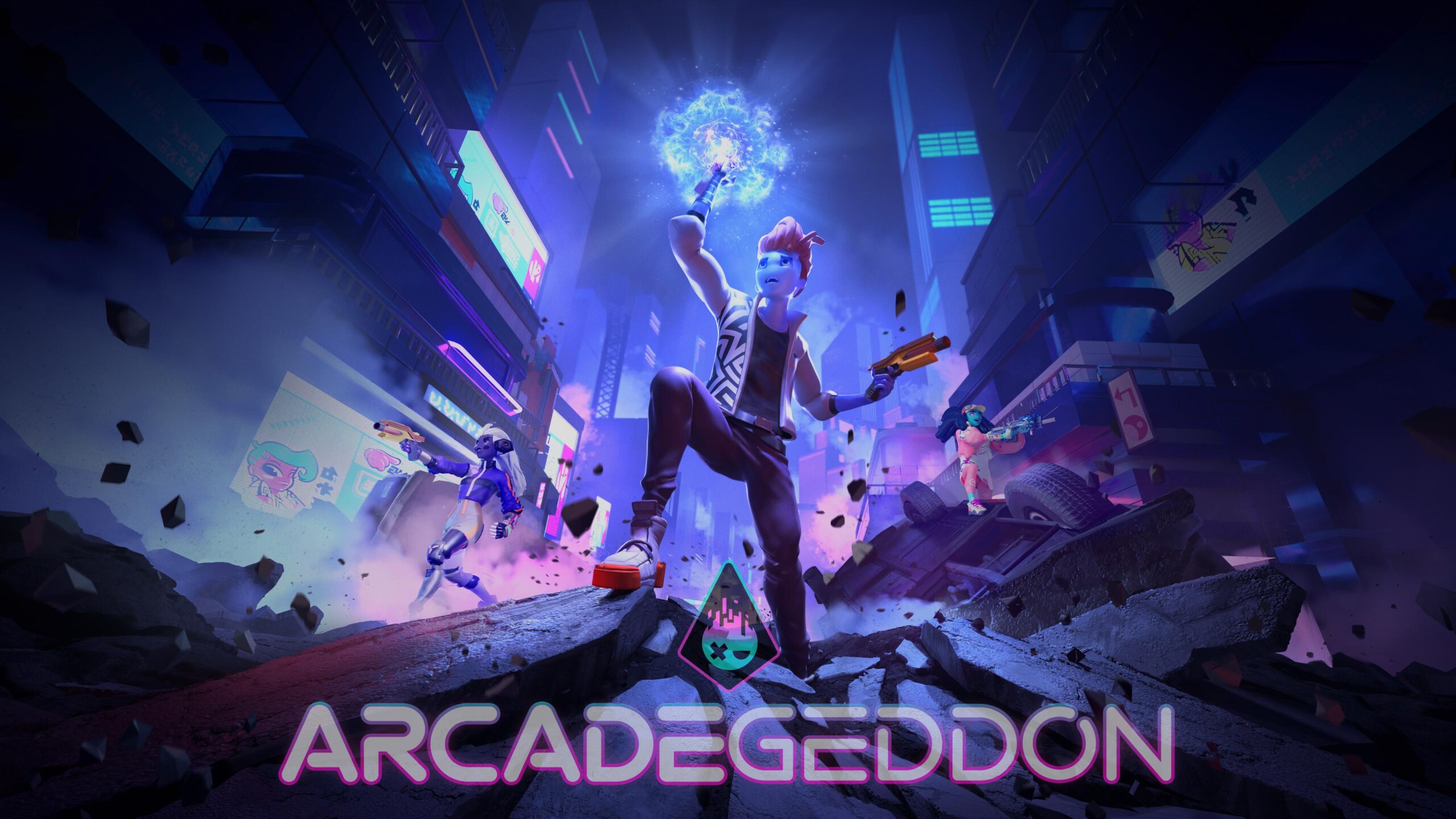 The hard thing about early access, betas and other early looks is a certain amount of benefit of doubt is required. Shortcomings will get fixed, incomplete parts will be finished, glitches are expected and with early access giving a timeline, it’s even easier to be hopeful. This is something I reflected on with Arcadegeddon, as we gave it a favorable impression when it launched in early access. We had some issues, enjoyed the core concept and were excited to see what the “finished” product looks like. Now that Arcadegeddon is officially out of early access, is it the next Hades or does it ultimately miss the mark?

If you didn’t play early access, the story is essentially unchanged. Essentially it’s a simple story of a small business owner fighting against the evil corporate overlords who want him gone. To do this they injected a virus into his game and you need to get rid of it. There is a bit more to it, like factions that add their own perspective to the conflict, but it’s also something that largely exists to give players a reason to play. In fact, if you’re not interested in the narrative, you can actually opt out of doing the various groups’ quests that progress the narrative. The choice is ultimately up to you, with it all coming down to how much you like the gameplay loop.

What makes Arcadegeddon interesting is the core loop itself. Players are basically sent to random worlds and need to defeat increasingly powerful enemies and a variety of challenges. There are a small handful of possible options, which ultimately come down to staying alive, standing in a specific spot, or shooting something. Each has its quirk, there are some versions where the point moves and others where it stays stationary, both with distinct positive and negative elements.

To help overcome these obstacles, players have access to roughly 30 weapons, along with over 10 surge abilities (magic, healing, buffs, etc) and 10 plugins (extra health, more melee damage, better healing, etc). These all give players options, the issue is that everything converges on the same endpoint.

Where the rogue-lite genre does best is giving players a way to succeed, without taking away from random chance. Unfortunately, I wouldn’t say Arcadegeddon does a good job of this. Depending on skill, there might be some initial wonder and excitement to try the various options and plug-ins, though most just fit a play style. I’m never going to bother with slide damage, extra melee damage, or speed when my shield breaks because that simply isn’t how I play. Most players will likely flock to skills that match their play style or are just practical like 50 percent more health. Surge Abilities have similar shortcomings, though difficulty will eventually make different skills more or less viable on a run. This leaves weapons, which is, unfortunately, going to be a divisive topic.

One of the things added in the final version is a weapon leveling system. Right now it goes up to level six and gives players immediate access to their favorite weapon. What makes it divisive is the leveling itself. In addition to giving skins, players start with a higher-tier version of said weapon. So if I really like Master Blaster, I can theoretically start with a legendary version that will be better than anything I can find for a considerable amount of the run. Leveling will also unlock the other slots, meaning long term you can start a run with your favorite three weapons at a legendary rarity.

A Look at the Starting Weapon System

This takes away from some of the charms of finding new gear and constantly trading up/making due. Instead, players can just use whatever they love and only switch if they run into a limited-use weapon they enjoy or find a better version. It also makes it so the early game is just about collecting cash and enhancements, making things feel a bit more monotonous.

Similar things can also be said about the cosmetic system, which may or may not be negative. On one hand, it’s fantastic that there are hundreds of free cosmetics to unlock, but on the other hand, it feels rather half-baked.

This is What Gold the Leaderboard Crown Looks Like

Progressing in the story and finishing optional objectives unlocks faction-exclusive cosmetics. For example, there is a TV head item, punk clothing, some wrestling duds and more. These can be annoying to unlock, though they also push players to try new things without asking too much. Well, outside of the ones that rely on RNG and are just tedious. Certain general ones can also be purchased from the customization area, which typically also have around 16 different colors that can also be purchased. This also includes a small selection of faction items, with the rest requiring Gilly’s shop to obtain.

While this shop uses an in-game currency or paid if you prefer, players are limited to nine items every couple of hours. The more options you unlock the less likely it is to find what you want. Especially since his inventory also includes weapon skins and emotes. But the real puzzling choice is the sticker system.

A small selection of tops will have access to another customization option called sticker. Right now I have access to a total of 49, which include generic symbols, faction icons, or random things like bacon. One interesting thing I discovered is some of them are apparently reward-based as well. For example, at the time of this review, I am ranked first on the weekly duo leaderboard with NightyEx, so my character has a glowing gold crown for as long as I hold the position and I have access to the bronze, silver, and gold stickers. These could add a lot of cool customization options, but instead, it’s almost hidden behind items you might not even use. Not only do these elements discourage long-term play, there still isn’t that much variety.

Combat in Arcadegeddon is a rather loose third-person shooter that understandably has an arcade feel. Most levels will involve a lot of running and quick shots, as hitting the enemy is often more important than hitting them in the right spot. It can be fun at first, but it also doesn’t feel like a large departure from what we saw in early access either.

Objectives seem to be exactly the same. There might be some tweaks, rebalancing, and other small changes, but there isn’t a new thing to do or problem to solve. Instead, there are new levels and that absolutely gives Arcadegeddon some much needed diversity, though this only has so much runway. This is also true for bosses, as there are two new ones, though there are only four, which a “successful” run will involve defeating all four, along with being rather shallow. Most have like four attacks, with almost all of the difficulty coming from the adds. Similar things apply to the difficulty system.

The highest I’ve ever made it in Arcadegeddon‘s difficulty was 77, in a run that took over six hours, which eventually just took on a difficulty slider approach. After about level 30 we stopped seeing new challenges and enemies just had more health, did more damage, came in bigger waves, and had a lot more status effects. This will absolutely appeal to some players, especially since a single player allows players to start at 1, 5, 10, 15, 20, 25, 30, and 35 depending on their profile level and mitigate some of the complaints about starting gear, but by that point, you should have so many boosts that you pretty much need to decide to lose. This was also what killed my aforementioned six-hour run. It wasn’t enemies, we were just ready to be done.

Unfortunately, in addition to some questionable design choices, Arcadegeddon is still rather glitchy. It was fairly common to open a chest or get an item and have no way to actually pick said item up. On one attempt we were unable to enter the exit portal and had to wipe, using a continue, with another run failing to load any enemies in the boss encounter, killing our run. This is also the only game I’ve ever played where I would say aim assist should absolutely be disabled. I’ve had less trouble getting my car out of snow than trying to move and shoot something besides an enemy. It didn’t happen every time, but when it did it was much to my detriment.

I think Arcadegeddon is really the perfect PlayStation Plus title. It’s absolutely fun to play, it’s mostly why I returned to write this review, it just misses a lot of the finer points. It’s a shame too since there are some minor elements it does extremely well too. For example, in the current version of Arcadegeddon, there are only five premium outfits and none of them cost over $5. Still, it lacks the type of loop that will likely keep players hooked long-term and quickly result in burnout.

[Editor’s Note: Arcadegeddon was reviewed on PlayStation 5 and a copy was provided to us for review purposes.]

Fun to play with friends in short bursts

Tons of cosmetics that can actually be unlocked

Several annoying choices that will turn players off