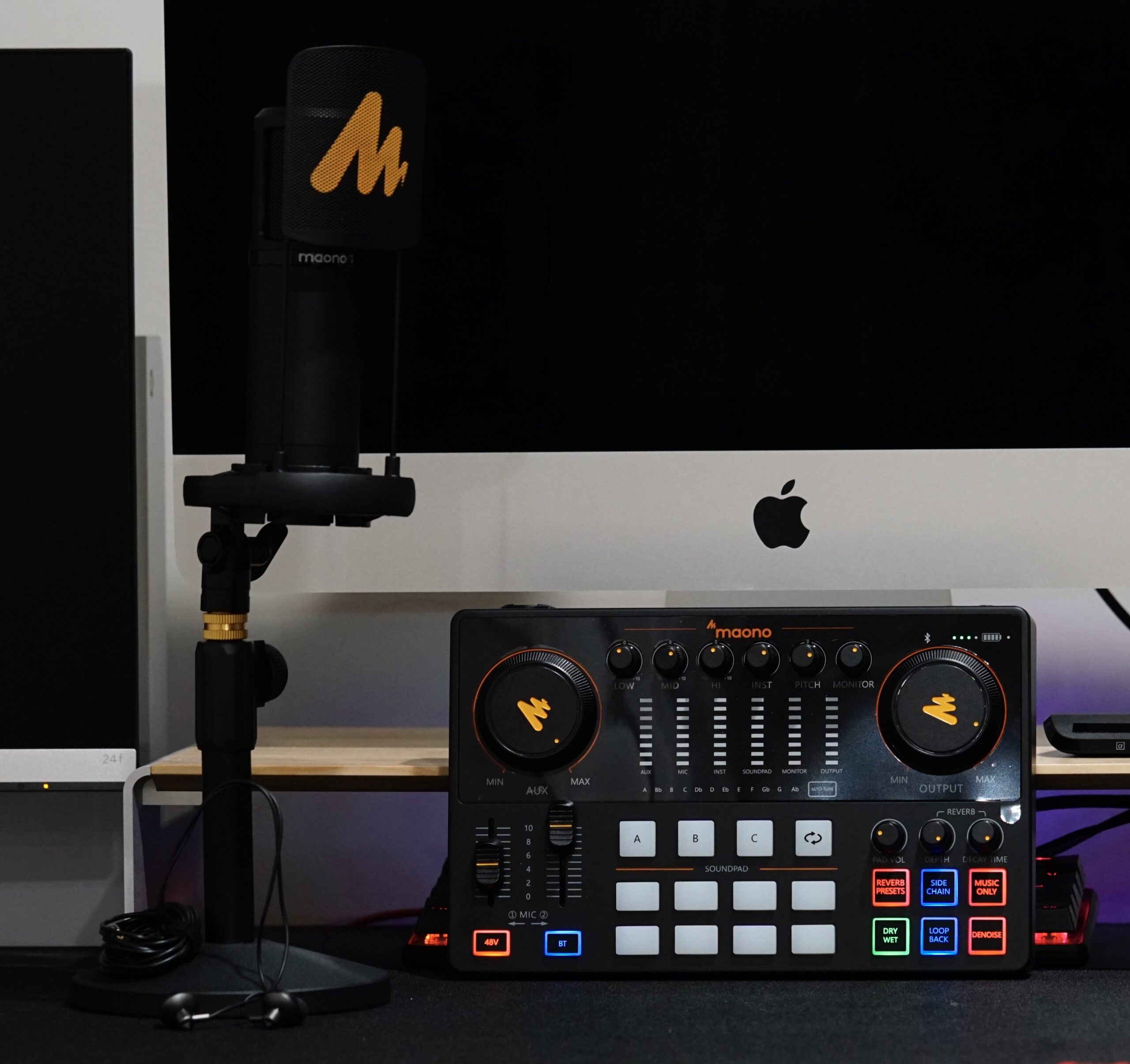 Some of the best companies take feedback and see how it can be used to improve the product. It might not always result in a change or even if they do listen, a positive, though it can lead to far better products. One great example of this is Destiny. It’s impossible to read my original of Destiny or even my review of vanilla Destiny 2 and thinks Destiny 2: The Witch Queen is the same game. Outside of gaming, there are certain products that change and adapt like this, with the latest being Maono’s new Maonocaster E2. With various changes, improvements, and tweaks, the new audio interface looks to be a massive win, but does it live up to the hype?

One thing that stood out about their Maonocaster Lite was the packaging. Typically I mention this because I am always curious about what it looks like and more importantly, what Maono wants their purchasers to think about their products. Everything about Maonocaster E2’s packaging reflects this. Not only is it an interesting box with its bright logo against a solid black void, but it also features a ton of helpful information. It tells you what Maonocaster E2 does, has an authentication sticker, clear images of what the product can do, and a bit more.

Inside is some fairly substantial heavy-duty foam that holds everything securely in place. For this review we had the pleasure of reviewing the Maonocaster E2A bundle, meaning it includes an XLR microphone to go with the audio interface. This makes the box a little bigger, with a second layer of foam holding the microphone securely in place. Not only does this make everything look fantastic, but it’s also extremely easy to find your cables, pieces and get Maonocaster E2 ready in minutes.

In terms of look and feel, there honestly aren’t a lot of differences between Maonocaster Lite and Maonocaster E2. While Maonocaster E2 is slightly wider and taller, it’s not much. Roughly half an inch wider and two inches taller. It’s also a little deeper, approximately an inch, which I will touch on more later in the review. All the buttons, dials, and details look identical, with a couple of marginal changes.

The two larger dials don’t have the same staged resistance found on Maonocaster Lite. So instead of quickly hitting a certain level and then requiring more force to reach a higher level, they have a consistent feel. The Lo, Mid, Hi, and Rec dials on Maonocaster Lite do not feature a chokepoint like they do on Maonocaster E2, something that may or may not be important depending on how often you use them. The two sliders for Echo and Monitor lose their chokepoint and are moved around on Maonocaster E2. But, the big difference isn’t little changes, as much as a more friendly interface.

As mentioned above, Maonocaster E2 is a little deeper, but this is due to it being on an angle. This makes it easier to see everything, whereas Maonocaster Lite simply lays flat. Less commonly used items are given less prominence, with a wide variety of new features. These include Dry/Wet, Depth, Decay Time, and Pitch, along with some much-needed design changes.

As someone who is extremely particular about my setup, it wasn’t ideal having everything go in from above on Maonocaster Lite. Due to this, a wire has to go across the side, making it a less clean setup. Not enough to be a dealbreaker, nor do I think I even mentioned it in my last review, which is fixed by adding the headphone jack to the bottom. A second USB-C port was added, in the event, you need to charge it and interface with something without it draining the other item’s battery. The ability to use it with an instrument was added, though unfortunately, that is one piece of gear I simply lack and could not test, with the biggest being XLR support.

Where Maonocaster Lite worked with a TRS (3.5) based microphone, which ones worked with the XLR to TRS cable or options were a little more limited. Maonocaster E2 corrects this by not only supporting XLR outright, there is a gauge on the back to give your microphone more power if need be. Those looking to upgrade from Maonocaster Lite don’t need to worry though. The second microphone interface is exactly the same, meaning any gear that was compatible there will also work here.

The final noteworthy change is the sound pad options. While Maono tried to add a sense of whimsy with their mock DJ sound effects, these were removed in favor of more customizable options. Instead of four custom options, there are eight that allow for up to 20 seconds of recording and three that support up to a minute. These work fairly well, especially since the options are pretty open. The loop also allows you to keep something going, so you won’t need to record 20 seconds of laughter and keep pressing it, the loop can be activated for as long as you think it needs to be.

Since this is the Maonocaster E2A bundle, it also features a microphone. Unfortunately, the official website doesn’t make it particularly clear, but this is a special version of their entry-level XLR microphone, PM320T. One nice touch is how well constructed the base feels. It uses a solid piece of metal to hold it firmly in place, with a good number of options to make it work. This model also includes a pair of earbuds, which are fine if you need a second pair or lack a wired one. What I liked about them is the cable is about 10’ long, giving you a little extra room to move around without taking your system with you.

Despite spending a lot of time talking about quality, it doesn’t mean anything if performance isn’t that great. Unlike Maonocaster Lite, I found Maonocaster E2 a little harder to get calibrated just right. Don’t be surprised if there is a good amount of testing and trial and error. Especially since the capture generally came out better than it sounded via the monitor. Once I got it going, it extremely well.

I tried using PM320T and it added some life to my normally monotone voice. After a lot of trial and error, I also got it to isolate my voice a lot better than USB equivalents, something that might appeal to someone with a noisy area or who like to keep a fan on. With the additional levels of power and easy slide to increase option, it was also extremely easy to adapt to changes in position. I didn’t need to worry as much about where I am sitting, as the dial is extremely easy to edit when you need to.

In addition to working well with the bundled microphone, I tried my other XLR microphone, Movo’s VSM-7. This honestly worked a lot better with Maonocaster E2, even if it required a lot more power. Best of all, the microphone stand worked with it in some capacity, meaning these can option can be used on future upgrades. After making the switch I was able to get a lot more clarity and details out of my capture.

That being said, being this is a gaming news and review site, using it with OBS can be something of an uphill battle. While it connected to my Mac and PC without a problem, well, outside of only working with the included USB-C cable, it doesn’t initially capture that loud. Just testing it out required more than a few test records to find the right balance between microphone volume and game, something that required it to be a little softer than some people might like. I imagine with more tinkering or possibly some tweaks with the equipment it can be overcome, though it is something to consider.

Like Maonocaster Lite, I was able to connect it and get it working with PlayStation 5 but not Xbox. This captured a little better, something that might be a better solution than further experimentation, though this will obviously vary based on set ups.

When used with separate capture programs it was fine, which also might be a solution. Less of an all-in-one system and just using multiple programs and merging them in post-production. The nice thing is that it will work and there are various options.

I think Maonocaster E2’s greatest strength is that you get a lot of value for the money. Some of my better USB microphones cost about as much as the whole Maonocaster E2A bundle, without the option to upgrade pieces in the future or as much customization. This is massive for anyone looking to take their podcast, stream, or even gameplay recordings to the next level. The big thing to keep in mind is that there is a learning curve. Even if it will instantly work, the added value required some trial and error, time, patience, and understanding to achieve. It will be worth it in the end, especially since this unit can be used with higher-quality microphones without instantly upgrading your interface.

[Editor’s Note: Maonocaster E2 was provided to us for review purposes.]

Can power an XLR microphone

Has plenty of options, like recordable buttons and various use cases

Angled design makes it easier to use

Considerable power, perfect for a wide variety of microphones

Included microphone is great for starting and intermediate users

Easily works with OBS and PS5

Only one XLR port

Both TRS connections are on the bottom, which is only a benefit if you're on the same side