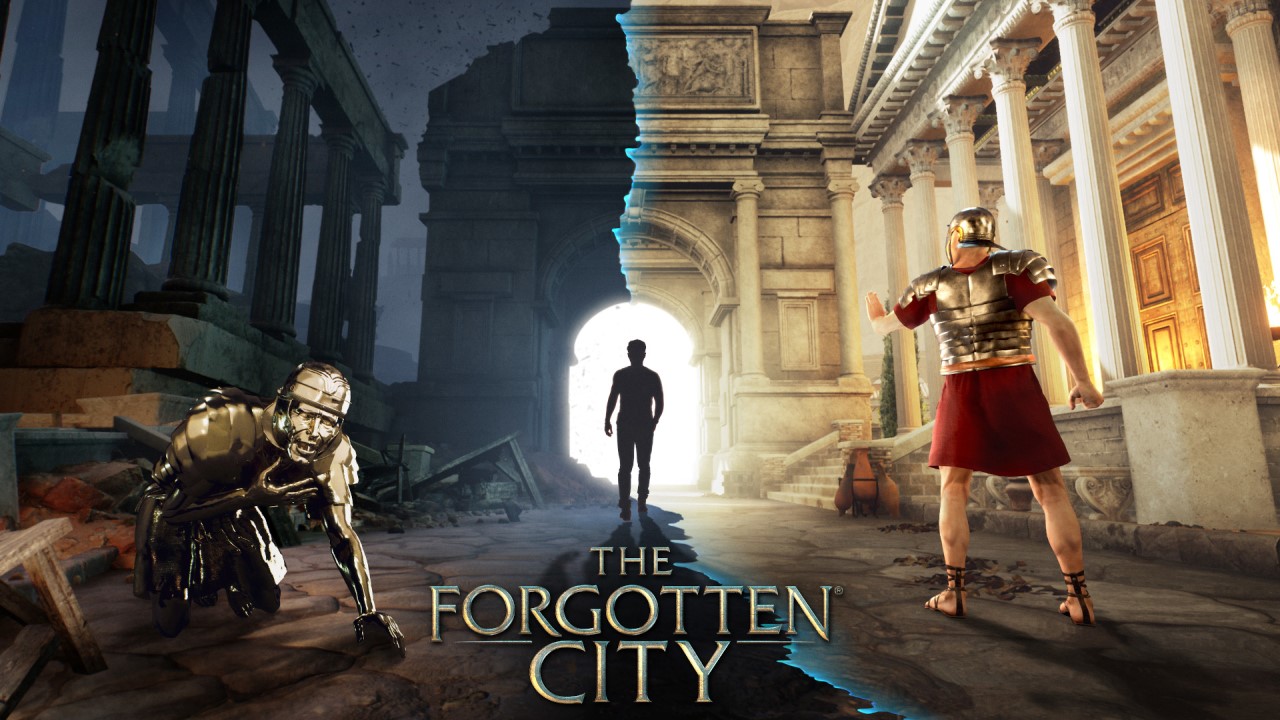 Let’s travel back in time to 2015. The ever-popular Elder Scrolls V: Skyrim was (and still is) going strong, becoming a home for various mods. One of those mods was The Forgotten City, a quest mod that took players through the titular Forgotten City on a superbly written, time-bending adventure. Now the efforts of the developer have extended beyond the confines of Bethesda‘s grand RPG.

Looping back to the current year, The Forgotten City has been built in the Unreal Engine, lending it an aesthetically enhanced new life that is separate from Skyrim while not completely voiding itself of its early influences. Those influences primarily come from the animations and dialogue present; there are no dragon shouts be found here. That’s not to say there isn’t a dash of magic. Clearly something is affecting the ancient Roman city in which the lead character mysteriously finds themselves.

Having traveled through a portal, leaving the modern day behind, the main character is now enveloped in a deadly mystery affecting the aforementioned Roman city. Violating the ominous Golden Rule — the many shall suffer for the sins of the one — results in everyone being turned into a golden statue, complete with the desperate pained expression from their final moments. It’s up to our time traveling hero to unravel the secrets surrounding the punishing system rigidly keeping citizens in line.

Uncovering all the clues and following leads will take more than a single day, however. Thankfully(?), the character is trapped in a Groundhog Day-like loop, wherein the same day repeats. This allows the transfer of knowledge and items between loops to further dive into the intertwining substories and overarching narrative in search of the final truth. Unless you are exceptionally skilled, chances are you will need to utilize the time loop to restart the day, new knowledge and items in hand, better prepared to prevent the untimely deaths of certain characters that contain critical information. Or maybe you simply wanted to steal coins, thus triggering The Golden Rule, so that you could return a richer man (or woman) after the reset. Money does have its uses, even in this closed economy.

The twenty-some-odd residents are the stars housed in the inescapable city. Each have their part to play, agendas hidden away, and information to reveal. Probing individuals under the right conditions can open up new dialogue options as well as point the player toward another person of interest. There’s a lot of running around, back and forth, involved in this story-heavy experience. But it all rarely feels tedious given how enthralling the drip-fed clues are provided to the player, urging them on eagerly to the next piece of the puzzle.

While revealing conversations make up a majority of the experience embedded within The Forgotten City, there are moments of combat and platforming. The latter is far more enjoyable than the former. Combat cropped up relatively early in a segment navigating a harrowing palace filled with creepy animated statues. Thanks to a bow that turns whatever it hits to gold, the living statues were once again returned to an inanimate state. The bow and arrow mechanics are sufficient, but they are far from exciting. The bow is a better tool for opening up new routes for engaging platforming sections, such as turning decorative greenery into walkable pathways.

Round and Round We Go

The time looping campaign lasts around 10 hours and it never fails to ensure that the player remains invested in the dealings of the various inhabitants as main and side plots reveal new branches. There’s so much to see, much of which could be missed by the less inquisitive. Not to mention there are multiple endings, too. The Forgotten City begs to have every character conversed with, every note (or wall graffiti) read, and each item examined. There’s rich writing to be found throughout it all. No wonder the original mod won the Australian Writers’ Guild Award in 2016.

Performance wise, the standalone release of The Forgotten City is a notable boost over its mod form. Loading into certain areas can provide a brief hiccup as the assets load beyond certain doors, but otherwise its a smooth experience. And it doesn’t look half bad, either. The Roman city is rife with beautiful architecture, uncomfortably accented by gold around every bend.

The Forgotten City is a memorable adventure, one that expands meaningfully on its renowned mod roots. The combat segments are largely forgettable, but that’s due to how captivating it is to converse with the varied and troubled cast of characters imprisoned in the small town. Platforming to uncover new areas and clues is also a joy, one that makes incremental progress feel exciting as the dots begin connecting. At the end of it all, The Forgotten City stands above its Skyrim ties and cements itself as an explorative adventure that ambitiously goes for the gold.

Here are the Five Best Dodgeball Academia Tips to you Graduate