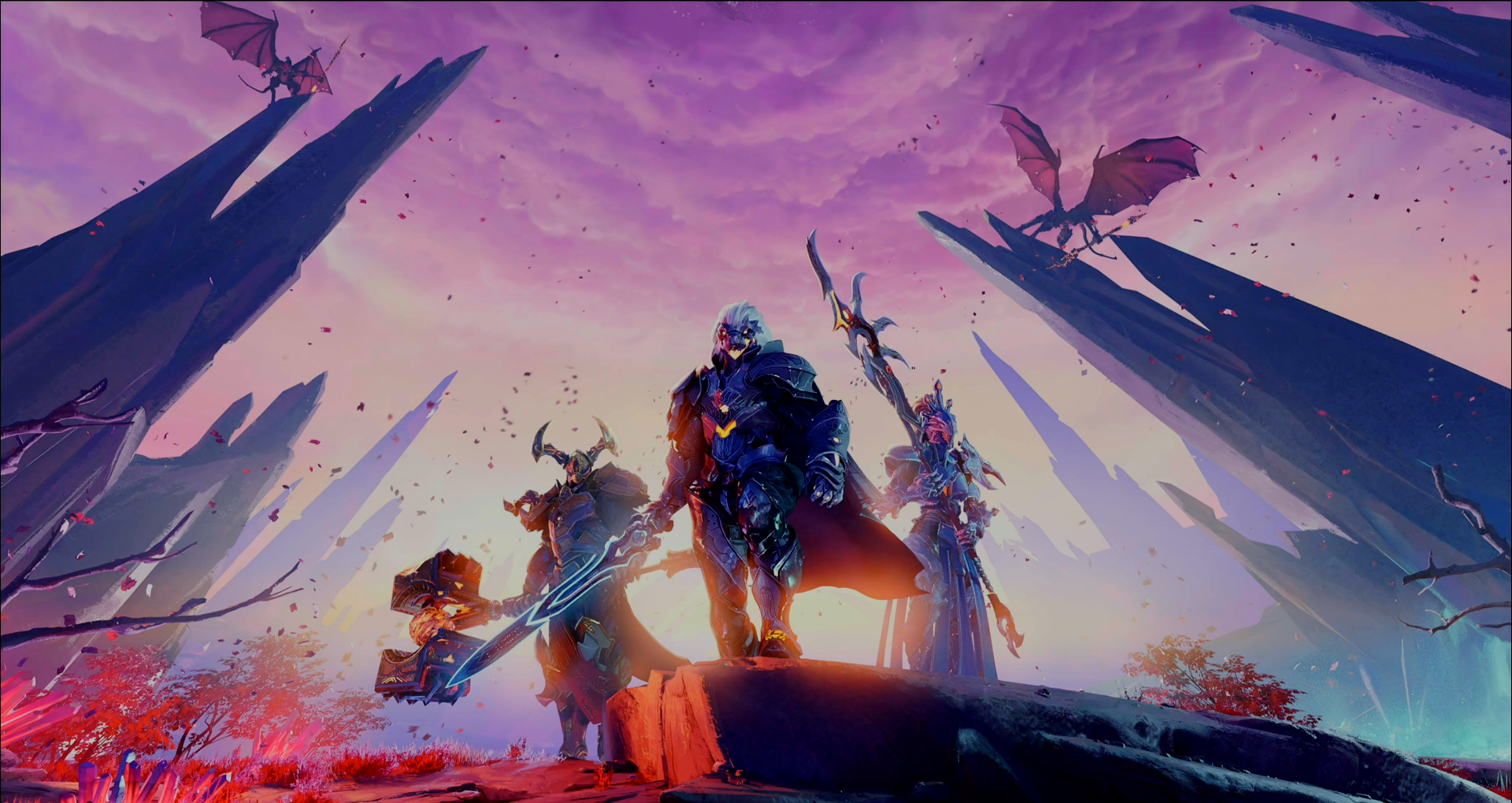 I love getting expansions of games that had potential but missed the mark. It’s the perfect opportunity to not just review the expansion but revisit the game itself. While Godfall fell short, the foundation was absolutely there. I, like a lot of people, expected Godfall Fire & Darkness to be the make or breakpoint, and with two major updates, Primal and Lightbringer, along with a new expansion to explore, is Godfall Fire & Darkness a step towards the light, or does it finally crash and burn?

Unsurprisingly, Godfall Fire & Darkness takes place after the events of the original story. Those who forgot or never played Godfall essentially control Orin, a man with strong convictions that was betrayed by his brother, Macros. With the help of the Seventh Sanctum, basically an AI of sorts, Orin decides to make a last stand against his brother Macros and his scheme to ascend to godhood.

Just looking at the number of cutscenes and explanations, it’s clear Counterplay Games either took the criticism to heart or finally had the time to flesh out the story a bit more. There were a good number of cutscenes, that advanced the narrative, though it still suffers from some rather significant problems.

Major threats like Moirax and the Flamebloods barely get any time to shine. With the story occurring in about five stages, it feels more like a summary than a full-fledged adventure.  Basically, one stage introduces the threat, another introduces a new character to help you, next one you build something to stop Moirax, followed by finding his fortress and the final confrontation. The other is poor characterization and dialogue.

In the original story, Orin had a yin and yang relationship with his brother Macros. Neither were terribly fleshed out, so Orin was good and virtuous, with Macros being conniving and evil. Moirax simply replaces Macros on the yang side to appose Orin’s natural yin. As a result, both characters bring the other down.

Both characters largely stick to one-liners you’d expect from a hero or villain. Before the confrontation, Moriax says things like “can you feel your death yet,” which is an actual quote, with Orin responding shortly after “I’ve beaten stronger than you.” It also concludes in a rather underwhelming way, leaving gameplay to, yet again, pick up the slack.

While I don’t want to be too negative about Primal and Lightbringer, it is important to understand both are more quality of life updates. Primal reworked some things added a new tier of items for doing end game, an additional level system, and other small, but appreciated changes. As for Lightbringer, a bunch of cosmetics was added, along with cursed items and a new mode.

Both Lightbringer, the mode, and cursed items are very reminiscent of choices you’d expect from Bungie and Destiny. At its core, Lightbringer is the same as practically anything else in Godfall. Go to a place, fight a bunch of enemies to complete an objective, followed by going to other places to fight more enemies. Players can take on negative traits to increase their reward, along with fight longer to earn more but the core gameplay loop is the same. As for cursed items, they have great power but most of the tasks needed to lift the perks are pretty lazy. Defeat 200 enemies level 50 or higher in Dreamstones, defeat five levels 50 or higher bosses in Ascended Tower of Trials, and things like that.

What has ultimately changed with Godfall Fire & Darkness was a slightly improved gameplay loop that has the same shortcomings as the original. Most levels are fighting the same handful of enemies, a small assortment of bosses, or repeating the same task another 10, 20, or 100 times. Gameplay remains awesome, largely due to Godfall rewarding a tactical playstyle but it really isn’t that different for a lot of players if a rock gets a different icon and does 60 percent instead of 30 percent, making it easier to unlock a new color.

There is no denying Godfall Fire & Darkness isn’t a massive step forward. It improved on several criticisms and there is a clear step towards making a better experience. However, whether you buy Fire & Darkness or just keep playing the new modes, it doesn’t fix the core issues present in the original. The gameplay loop still goes places and fights waves of enemies or different versions of fighting the same enemy five or six times. Thankfully it’s a lot more accessible and the content is far more rewarding but it would’ve been nice to see a bit more or at least longer expansion.

[Editor’s Note: Godfall Fire & Darkness was reviewed on PlayStation 5 and a copy was provided to us for review purposes.]

Bosses have mechanics to overcome and deal with

A good number of quality of life changes, like cosmetics and higher item tiers

How to Obtain a Level 65 Dreamstone in Godfall