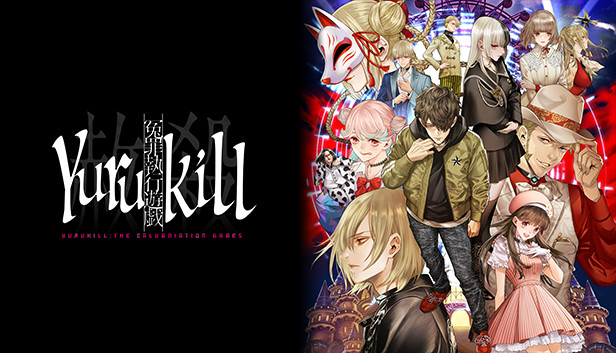 When I was first tasked with reviewing Yurukill: The Calumnation Games, I thought I was playing a simple 2D style shoot-em-up. While looking at the screenshots, it appeared this game was a flying shooter much like the old Raiden games from the ‘90s.

However, to my surprise, there’s more to this game than meets the eye. Yurukill: The Calumnation Games is more like a visual novel with detective puzzle elements mixed into it as well. I thought The Quarry was the most unique experience of 2022, but this game is something even more unique.

What interested me most about the game is that this has a unique story and premise. At the start of the game, you play as a young 29-year-old Japanese man named Sengoku Shuju stuck in prison. He has been in prison for 10 years, and he’s been accused of arson. He has to serve 999 years in prison!

Sengoku Shuju denies all of the accusations and he wants to prove his innocence. In his mind, he feels that he has been framed for murdering 21 people burning in a building. To make things even more interesting, he meets a young girl named Rina Azami. She’s the only survivor of the arson, and she wants Sengoku to finally admit his crimes.

Sengoku has to be on his best behavior because both are admitted to the Yurukill Games. These games are unique tasks where Sengoku could finally be free of his crimes. On the flip side of this, Rina Azami is an executioner and she has the ability to kill Sengoku if she disagrees with him. He has a poison necklace around his neck, and one small button press from Azami could kill him instantly!

Sengoku and Rina aren’t the only teams in this game either. There are several other teams with prisoners and executioners too. Each prisoner is trying to prove their innocence, while the executioners are there to see if the prisoners are really guilty of their crimes.

While I won’t spoil the stories of everyone, the second chapter allows you to play as a pair of brothers that have been accused of murdering an old couple for money. Much like Sengoku in the first chapter, they want to prove their innocence as they claim not to be the real killers either!

You don’t get to control the characters’ movements as you can in most other games. The game is just a bunch of screens, and you have to move the cursor to find several points of interest. It reminds me a lot of the old-school point-and-click PC games from the ‘90s.

Some of the investigation parts of the game are quite clever and tricky I might have to add. You may have to find out a code to a door or safe, or try and find useful things around the room that the robot wants you to get.

Several of the puzzles are hard to solve, but thankfully this game allows you to use a hint button. The hint button gives you clearer clues on how to solve the puzzles. If you don’t want any help at all, you can choose not to press the hints button to really challenge yourself and your brain.

After you solve the investigation/puzzle elements of the game, only then can you start the shoot-em-up sections. In this part of the game, the prisoners have to prove their innocence with logic and evidence to convince their executioners they’re not guilty of the crimes they’re accused of.

You will have to answer several questions during these parts, and the shoot-em-up segments allow for some cool boss battles to commence. If you lose all your lives during this part of the game, you sadly will have to start the level all over again. You will also lose lives if you answer some of the questions wrong too so you will have to pay attention to each case!

A lot of gamers may dislike this game if you only want to play the shooting sections of the game. Before you can shoot things, you will have to read through a TON of dialogue. Sometimes I don’t mind narrative-driven games, but I have to admit that some of the talking elements drag on for far too long.

Graphically, there is also nothing too special about the visuals either. Most of the time you are only seeing anime portraits talking, and the shooting segments look very outdated by today’s standards too. Even on Nintendo Switch, the game looked like nothing special.

Overall, Yurukill: The Calumnation Games is a very unique game with an interesting story and enjoyable puzzle elements. That being said, the gameplay might not be accessible to everyone, plus the game has too many dialogue scenes. Only pick this game up if you are into visual novels.

[Editor’s Note: Yurukill: The Calumnation Games was reviewed on the Nintendo Switch and a copy was provided to us for review purposes.]

Not a game that will appeal to everyone