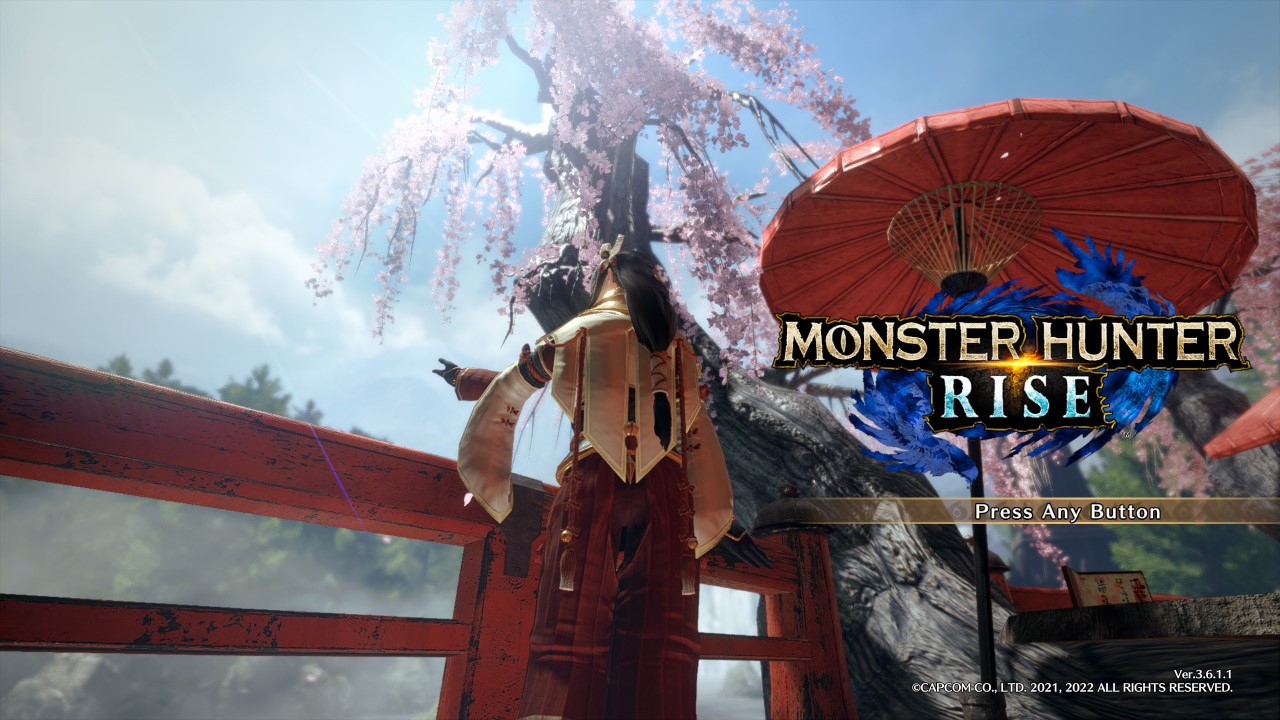 One of the many gems to come out of 2021 is the formerly Switch-exclusive, Monster Hunter Rise. I say “formerly Switch-exclusive” because 2022 has transported the latest installment of the longstanding beast-slaying franchise to an all-new platform: PC. The last outing for Capcom’s mega hit on the platform occurred in 2018 with Monster Hunter: World. But you would be mistaken if you went into Monster Hunter Rise with the expectation that it mirrors the big-budget multiplatform behemoth that garnered substantial Western attention. The soul of the latest installment shares more in common with the other 2018 entry, Monster Hunter Generations Ultimate.

Monster Hunter Rise once again empowers players to create their own hunter and climb the ranks, beating down (and even temporarily mounting!) increasingly formidable beasts along the way. The iconic Rathalos returns as well as recently absent monstrosities, like Zinogre. The roster of deadly opposition is quite vast. There is a story tying together these monstrous face-offs, providing a thin but adequate setup to move the action forward, but it is far from anything striking or memorable. Although that may deter those seeking a rich storytelling experience, Monster Hunter has never excelled in this regard. That said, the reasoning behind the continuous dispatching of brutish creatures does not need to be particularly elaborate. Because the action combat at the heart of Rise‘s gameplay loop is compelling enough to drive players through to the end.

Monster Hunter Rise offers up 14 weapon types spanning blunt, bladed, and ranged selections to further personalize the all-you-can-kill monster buffet on offer. The weapon options spread across a wide assortment of play styles, ensuring that virtually everyone’s desired approach is covered. Are you a budding entomologist who refuses to give up the high ground? The Insect Glaive awaits. Are you fond of the simpler life, one of plucking strings and bonking things? The Hunting Horn is a perfect fit. And thanks to the inclusion of unlockable and swappable Switch Skills, a weapon’s moveset can be altered to align combos with a player’s chosen tactics. Whatever your preference, Monster Hunter Rise is here to accommodate.

As long-time fans are well aware, there are differences in attack and movement speed depending on the weapon wielded. Monster Hunter Rise shakes up the standard flow by introducing Wirebugs. These game-changers are part of the buff-granting Endemic Life insects found throughout each map. Wirebugs, specifically, are used for navigational and combat purposes. In regards to the latter, Wirebugs drastically change up how fights can play out. Slow, lumbering offensive equipment like the Gunlance and Great Sword are lifted out of their otherwise rigid structure thanks to Silkbind attacks activated through the aforementioned bug-themed tool. The implementation of these heavy weapons in past titles left them largely ground bound. Now, the larger offensives can swiftly launch vertically and horizontally with new attacks, even quickly removing the player from harm’s way. The mechanic arguably alleviates one of the Monster Hunter‘s less flexible signature characteristics.

Additionally, Wirebugs can be used to maneuver around the environment in ways not previously possible in the series. That newfound verticality borne from the added mechanic brings depth to maps that are smaller than those explored in Monster Hunter: World. Being able to navigate easily promotes exploration, which is important for those collecting Endemic Life to better prepare themselves for the main encounter. The landscapes are rife with items to collect and boons to acquire in what becomes a standard pre-fight ritual. And it’s not just the Wirebugs that promote this rewarding exploration.

Say hello to the Palamute, an aggressive attacker and goodest boy (or girl). These canine companions join the available customizable buddies that can be brought into the colossal showdowns, meaning the adorable support-focused feline Palicos are no longer hunting alongside the player alone. The larger stature of the Palamute opens up a new traversal method, using the dog as a mount. Riding around the maps on the back of your new pet speeds up the hunting process, especially for those not blast dashing vast distances with the Gunlance. Previously, heavily injured monsters would limp away to another area, leaving the player in a sluggish pursuit of their target. Now, the player can hop on their Palamute and ride alongside the retreating creature, ensuring minimal break in the action. It may not sound like much to the uninitiated, but those that have played these games for the last decade or longer will undoubtedly appreciate this evolution of the established systems.

As much fun as it is to experience Monster Hunter Rise with the AI companions, the overall experience is boosted by teaming up with other players. Up to four hunters can band together to fight the lengthy list of frightening foes. While the action can get a bit hectic onscreen, especially if poor positioning has you unintentionally interrupting your fellow hunter, there is nothing else like coming together to fell the resilient monsters in spectacular fashion. The biggest gripe with the co-op system is something that, once again, is far from foreign to the franchise. Quests are split into village and hub varieties. Hub quests can be enjoyed in co-op, but village quests are single player-only affairs. And those village quests are necessary to move the story forward, which translates to more available quests overall. Not everyone will take issue with this limitation, but it’s likely those barred from transferring the countless hours invested in the Switch version may find regaining their hard-earned progress a bit of a slog.

Before we wrap up, let’s talk about the state of the PC version, specifically. No longer held back by the limitations of Switch hardware, Monster Hunter Rise is able to… rise … to new heights, courtesy of sharpened textures and higher framerates. The game isn’t on the visual level of Monster Hunter World, which is sure to please those sporting older PC components, but it still oozes charm in its aesthetic design. Barring a now-resolved save issue, Monster Hunter Rise provides the definitive experience for this exceptional entry.

Monster Hunter Rise finds a brand new home on PC, bringing everything we loved on Switch and elevating it further with more powerful hardware freeing the title from its previous technical limitations. Capcom’s latest installment brings that classic monster-slaying action firing on all cylinders, enhanced by improved mobility and combat customization. For those who have held off on joining the growing ranks of hunters, Rise offers arguably the most new player-friendly onboarding experience seen in the series so far. So whether you are a decade-old fan or super green newbie, Monster Hunter Rise is for you. At the very least, do it for the lovable Palamutes.

[Editor’s Note: Monster Hunter Rise was reviewed on PC and a copy was provided to us for review purposes.]

No cross-platform save support