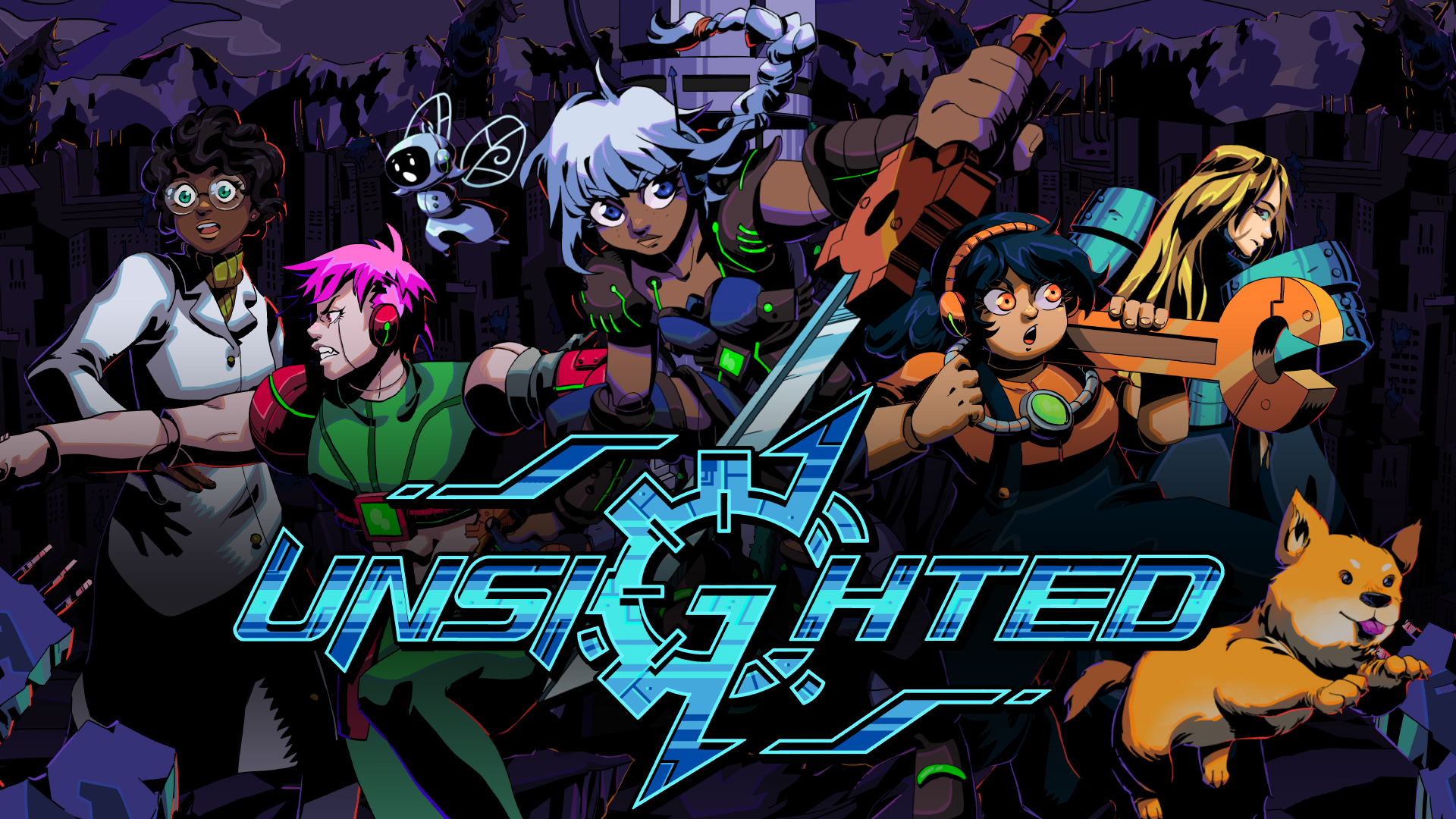 One of the biggest struggles of a new IP is finding a hook. Some games offer eye-catching visuals, brutal combos, or a massive narrative. Unsighted looks to offer all of these things in an oddly optimistic view of a dystopian future. With other games venturing down the same path, is there enough for Unsighted to succeed or does it fall short of expectations?

Unsighted offers a rather unusual story. You play as Alma, a fierce warrior who forgot her past. Before long you learn about her struggles and past mistakes that have left the world in a dark place. There is also a struggle with humans from the past, a mysterious corrupted force, and others more.

At times it can be a bit hectic, though Unsighted succeeds in telling the story it wants to tell. It’s less about the world and more about her relationship with Raquel. It’s a sad, yet relatable, story that shows their journey from frustrating liability to a far closer relationship. That is, assuming you can get to the end.

Great reminder to focus on making the most of your time

The odd thing about Unsighted is that I was never quite sure what exactly it wanted to be. On one hand, it’s unmistakably inspired by The Legend of Zelda. From the sounds it makes when you find a hidden area, the way puzzles are constructed to even the power-ups you get. It was so similar, I often thought “how would this puzzle work in Zelda” and that often resulted in the solution. But on the other hand, there are brutal, puzzling, and frustrating mechanics that make things very tricky.

Despite boasting rich and varied combat, I found the experience narrow and restrictive. The most powerful weapon in the game is parry, which can also be your undoing. Many encounters will have multiple enemies, each with their own timing. Get it wrong and you’re going to get hurt. But the main benefit is this being the single best way to damage any enemy and in some cases, the only real way to defeat them (Shadow Creatures might take one damage normally and 100+ after multiple parries). I lost more encounters to trying to get the timing right when three or four enemies were attacking than anything else.

Terrifying enemies and bosses to challenge and defeat

If melee isn’t your thing, there are multiple ranged weapons that can be just as limiting. Not only do range weapons do far less damage, but the also reload system can cause more problems than it solves. After emptying a clip or deciding to reload, players need to click a button at the right time. Do it and you’ll instantly reload and if you miss it will slowly happen. This can be frustrating when there is a boss raining ice or swinging a sword at you. Worst still, being interrupted can sometimes cause more problems. Regardless of having 10 bullets or none, you’re limited to however much of the bar fills. If you get one bar before having to dodge an enemy attack, you have like three bullets and if you do it before it even starts, you have nothing.

Despite this, Unsighted relies heavily on players having specific items. Until you unlock the double Hookshot, many sections will force players to use the ice cannon, single Hookshot, or shuriken. Sure, it is possible to swap between weapons as needed but it can be a lot of time in the menu, just to maybe make an encounter slightly easier.

While all of this is happening, players are constantly aware of various time limits. Essentially, every character, including yourself, has some kind of time limit. This can be increased via an item, though many have a limit to how much time you can give them. Take too long with a puzzle, now you can’t buy buffs. Explored a dungeon, now the upgrade vendor is dead. Thankfully, many of the extremely important characters last a while and in some cases, there are multiple vendors. However, increasing their time can also decrease costs to a more manageable level.

Even if there is a lot to question and wonder about, Unsighted touches on a lot of the elements I loved about The Legend of Zelda. Many of the puzzles can only be solved by paying attention to some random thing or looking at your map. There are also a lot of obtuse solutions and weird mechanics like there is a trophy for literally putting the super sword your craft into a stone and beating the game. Still, it’s engaging and fun once you get the swing of things.

Simply put, Unsighted won’t appeal to everyone. The core experience is fun and the puzzles engaging, but it’s also a rough game that prioritizes speed above all. Thankfully, explorer mode makes things a little easier in regards to time and vendors aren’t overly useful. Fans of The Legend of Zelda looking for a bit more will likely enjoy this, as will those who love unforgiving combat but many others will just find it to be a series of frustrating mechanics.

[Editor’s Note: Unsighted was reviewed for PlayStation 5 and a copy was provided to us for review purposes.]

Puzzles reminiscent of The Legend of Zelda

Lots to see, experience and play

Does not hold your hand

The way enemies attack can often result in taking damage

Putting every character on a timer, even if there are ways to limit or modes that get around it, can be frustrating

Some mechanics, like wall jump, were really inconsistent and far from enjoyable

How to Defeat the Mechanical Eagle in Unsighted