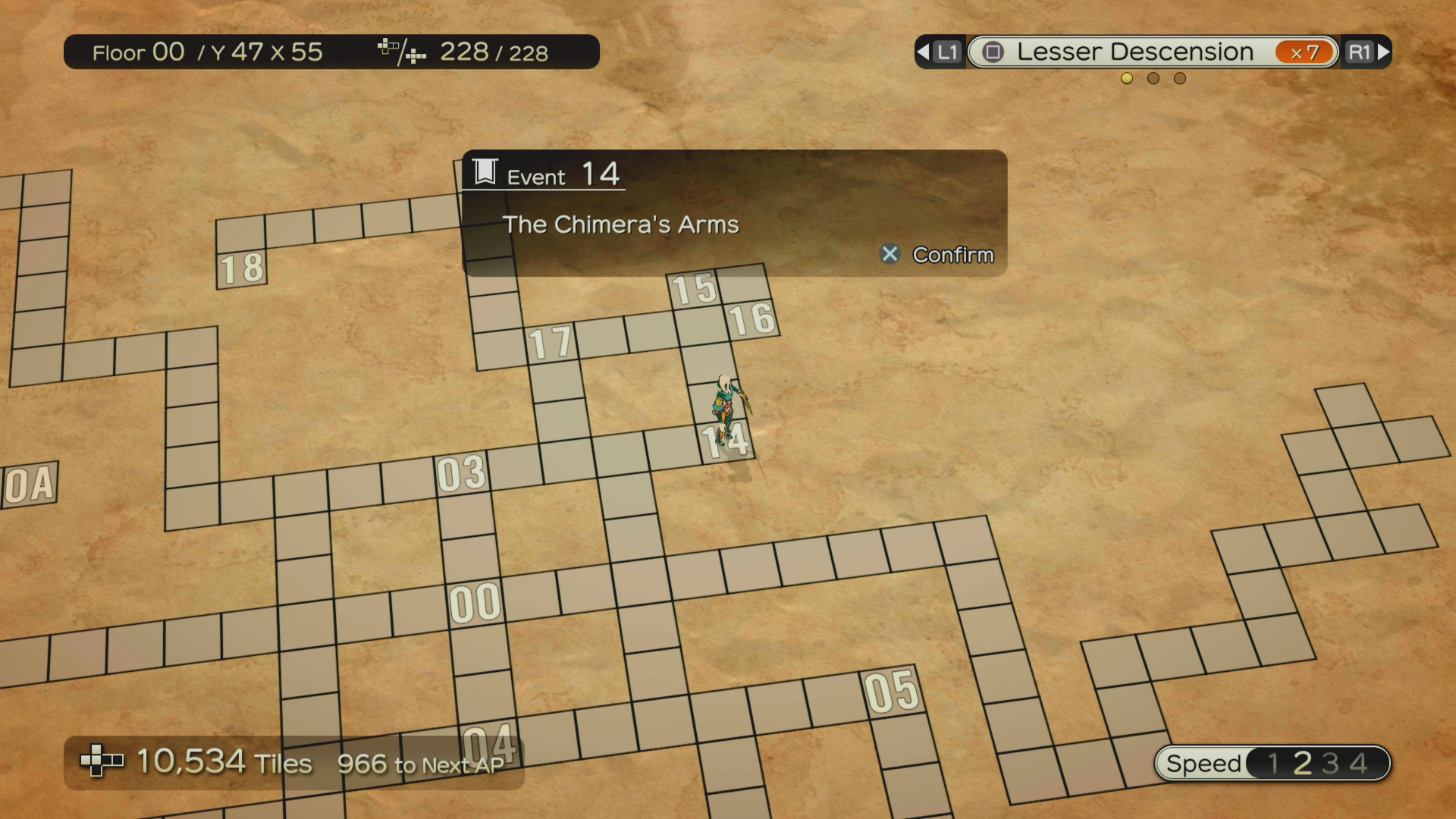 As games continue to evolve, the idea of what a game should entail continues to change as well. Visual novels push the boundaries of storytelling, others cooperation, some concept, with Dungeon Encounters questioning how many extra things are required. The simple dungeon crawler has very little going on, but does that make it a bad game or does it tap into what makes RPGs enjoyable?

Dungeon Encounters doesn’t have much of a story, narrative, or even explanation of what or why you’re doing something. You essentially pick four characters and then move forward in the harsh dungeon. After the first area, the gameplay loop becomes clear, which is to say it’s honestly extremely simple.

Every level is a series of squares that make out a location. Your character can freely walk on any space without a black number without a fight, with black numbers obviously indicating a fight. Every other number relates to a series of events, which could be a shop, healing, revive, stairs, and countless other things.

Equipment Makes it Easy to Understand your Limits

Fights themselves are also very simple. Every character has two weapon slots, two armor slots, and an accessory. What you can equip is dictated by proficiency points, a metric that increases as your party levels. Combat is also a rather unique take on the RPG genre.

When starting a fight, every character has up to two defenses and a health bar. The way it works is quite straightforward. Physical attacks hit physical defense, magic does the same for magic defense, with the attack hitting your HP if you don’t have any defense. The good/bad thing is the lack of breakthrough damage. A single point of defense can defend against an unlimited amount of damage. This makes leveling new characters a bit easier, along with keeping health high for various battles. Naturally, enemies have the same benefit, though many of them also lack specific defenses or are in arrangements that favor you.

Where things stand out is how simple everything else is. There aren’t roaming monsters, buildings to enter or really anything to see. You just go to a number, you’re told what it does and can make a choice. Combat is the same. An attack, at most, has the icon change color for a second or two, followed by damage. Many weapons also do fixed amounts of damage, meaning it’s predictable and understandable how a fight is going to conclude.

Despite these shortcomings, Dungeon Encounters remains fun due to how tactical it is. Knowing turn order, how much damage an attack will do, being aware of the monster type (flying requires ranged/magic to damage) all make for an engaging experience. As do secrets and other little quirks, but at the same time it can be a frustrating experience.

Fearsome Foes can Solo a Party

For example, the first time I wiped was in the second set of levels when I landed on a 74 space. To put it into perspective, 29 is the highest I had completed, with 74 being closer to the middle, complete with five enemies 27 levels higher than me and so much life it would take close to 40 hits. I couldn’t escape, despite trying at least eight times and wiped. Unwinnable fights for that point, similar to the FC Treasure Hunter fight (it’s four from the last fight) really add nothing for players at that point. You just get punished for not suddenly realizing an unwinnable fight is there.

This also plays into how confusing the numbering system can get. In addition to zero through nine, A through F make up a 16 point scale. If this is confusing, the 16th highest encounter is 0F. Likewise, obtaining the required gear can feel rather obtuse. Venders have random amounts of gear, dictated by progression, that also don’t have easy ways to visit. With enough money you can be somewhat overpowered, with grinding offering other paths, it can just put a hamper on things when wiping means you need to not only progress to that point again, but also figure out how to reclaim and revive your team.

The tricky thing about Dungeon Encounters is that it’s an engaging game. I found myself saying I would do one more floor a couple of times before realizing I had to stop. But, by the same token, there are plenty of games with deeper mechanics and more to it than a board and boxes fighting one another. For this reason, I think it appeals to people who love the imaginative side of Dungeon and Dragons, but many RPG fans will likely find the lack of practically anything boring. After a while, you just realize you’re swapping numbers, with a team eventually winning or losing.

[Editor’s Note: Dungeon Encounters was reviewed on PlayStation 5 and a copy was provided to us for review purposes.]

One of the simplest modern games I've played

How to Find Characters in Dungeon Encounters