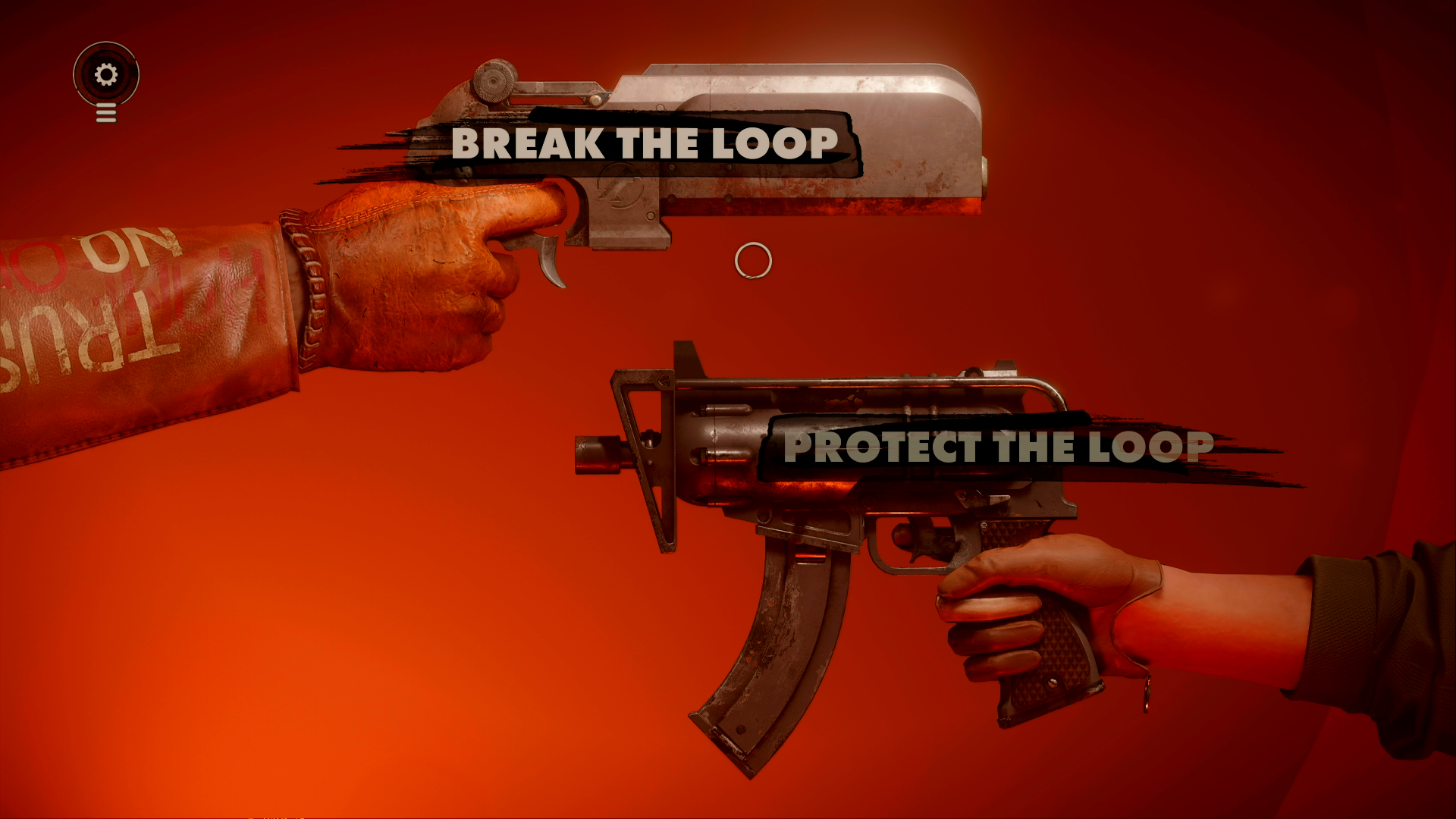 Deathloop’s marketing campaign was an interesting journey. The initial reveal sold my friend and me on the concept instantly. As time went on, players grew tired of seeing the same handful of things every time. It created a lot of questions about the concept, while also adding unneeded confusion. For example, my friend and I went in expecting one thing and got another thing. Still, with Deathloop finally letting players experience the loop, is it worth trying to break, or are you better off avoiding it?

Usually, I like to start my reviews off with an overview of a game’s story or premise. In the case of Deathloop, there is a story and more to the premise than Colt trying to kill seven specific people, known as Visionaries, and a mysterious woman that is hunting you, but the bigger mystery really is the gameplay loop itself.

Despite going in expecting something similar to Returnal; Deathloop is actually more of a traditional first-person shooter than anything else. Looking back at the concept of a loop of death it makes sense, but it also plays out in a rather weird way.

Deathloop makes finding and progressing in a task a breeze

Essentially there are four stages, with their own version for morning, noon, afternoon, and evening (though a couple exceptions exist). For the most part, the set pieces don’t change. Sometimes a new path will be open and another closed or there will be slight variations due to a Visionary being present. These are important if you want to see everything, though oftentimes they’re only relevant for some mission that will occur at some point in the game’s story.

Instead of having a linear series of events like most games, Deathloop gives Colt absolutely no direction. It falls on players to attempt missions, find Visionaries and collect intel. At some point Colt will obtain something that unlocks a Visionary lead, unlocking the series of events needed to properly kill a target.

Before you worry about having to complete a large number of tasks to finish a single loop, most missions require data that Colt will remember on subsequent cycles. For example, two of the Visionaries meet at a specific time and place every loop. It’s Colt’s job to first find it and then crack the code to get to their secret meeting place, though once you have the location and code, you can skip straight to killing them.

As a result, this can create a divisive experience. On one hand, Colt has countless ways to accomplish any given task, but on the other, many of these tasks happen in such a way you only have so much control, at least if you wish to break the loop.

Thankfully, Deathloop strongly encourages repeat attempts to build Colt’s arsenal of weapons. Anything you obtain in a run can be retained by trading a collectible resource known as Residuum. These trades are one-time, meaning you won’t need to pay a fee every time a new cycle begins. At first, these will likely be used to retain and upgrade Slabs, a mysterious power that vastly changes the game.

Some Slabs include teleporting, invisibility, and sharing damage between linked enemies. Deathloop does a great job of making these important, as they unlock countless ways to progress. The best example of this is honestly Shift (teleportation). After unlocking the Slab, Colt can further enhance it by adding a sonic boom to hurt enemies he teleports to, place swapping, or simply increase the range. But, the real benefit is being able to sneak into a building without being stealthy. By standing in certain spots or approaching a specific way, Colt can avoid enemies without slowly killing them or waiting for their actions to finish. They also strongly reward creative play styles, like Nexus (linking) can enable multiple takedowns from a single stealth attack.

As much of a highlight as Slabs are, weapons themselves are pretty underwhelming. There are only five or six base guns and another four or so unique ones. Each weapon falls into a specific category like rifle, SMG, shotgun, with unique guns offering things like snipping or dual pistols that can swap to an SMG. Any of the base guns can also get different rolls, though the variety of is pretty small and not overly important to most players. Similar things can be said about trinkets, optional buffs, though they at least give players a lot more control over what they can or can’t do. Those perks range from better stats, hacking range increase, or being immune to poison gas.

Like a lot with stealth mechanics, Deathloop’s AI can be very hit and miss. There are times when I felt like I could rush any objective without any opposition and other times the AI just dominated me. Similar things can be said about getting caught. In some areas, I could go guns blazing and the AI is shocked I am there, whereas other times I could tap a bottle and the place is on high alert. That said, it largely works for Deathloop since the core gameplay loop is approaching situations differently.

When Colt is not working on breaking the loop, there are a good number of optional tasks to complete. There are at least 11 unlockable costumes for Colt, a couple for Julianna, extremely useful trinkets to make it possible to complete certain tasks (hacking mines), several guns, and more I did not discover before breaking the loop. These can also be attempted on an existing save, even after breaking the loop, or players can reset to see if they maybe missed something.

Deathloop also does a good job of showcasing some of the immersive technology on PlayStation 5. Certain dialogue and audio plays from the controller, a feature I don’t typically care for but worked well here. The DualSenses adaptive triggers helped make fights feel more intense, as did the haptic feedback. It adds a lot to the struggle, in a way similar to Returnal. If nothing else, it’s a great showcase of why these features are actually worthwhile, even if it’s just feeling a different vibration. Spatial audio can also add a bit more intensity to Colt’s hunt. For better or worse you’re more aware of your surroundings, which might make you paranoid, even if it can potentially save your life.

Another hit/miss feature is Julianna. She works similar to invaders in the Soulsborne games, offering a wide variety of struggles. Unfortunately, I did not run into any player-controlled Julianna’s, her execution is okay. Even in the single-player mode, she will sometimes appear, which seems more likely when you’re on the “correct” path, forcing players to plan ahead. She can appear as a random enemy, or even Colt himself, leading to struggles. Difficulty varied based on where we fought. Sometimes I would get blindsided, whereas other times she died with ease. Thankfully, she is not an overwhelming force like Mindjack, making her an interesting component. Killing her also returns lives (you get two respawns per mission), allowing for a more fun challenge than anything else.

Those who control Julianna also get some special scenes, different powers and abilities, missions and more. It’s absolutely a fully fleshed-out mode, even if it seems more like a gimmick.

With this covering gameplay, it really is important to touch on Deathloop’s story. Even if the core storyline figuring out a sequence of events that leads to all the targets dying, Beyond that players will learn what kind of relationship Colt and Julianna had, more information on each Visionary, what caused the loop (to an extent anyway), and more. It won’t answer every question, at least the path that breaks the loop, but it’s more complicated than two groups fighting forever.

Enjoying Deathloop comes down to what you actually want. If you’re looking for a game where every attempt is different, you’ll probably be disappointed. Deathloop is still a loop and, as a result, the situations are always the same or similar enough. The real fun comes from handling them differently, which can and often will change all the variables. Especially every path has four or five different ways to approach it, on top of hidden mechanics and outcomes. All of this, combined with a really immersive experience makes Deathloop a great experience. It might not be perfect but I found myself engaged until the credits rolled, which is really all you can ask for.

[Editor’s Note: Deathloop was reviewed for PlayStation 5 and a copy was provided to us for review purposes.]

Good variety of Slabs to kill your way

Dialogue is often quite amusing

PlayStation 5 features are an absolute delight

AI can be a bit dumb

Breaking the loop is oddly scripted

What Happens After a Day in Deathloop?