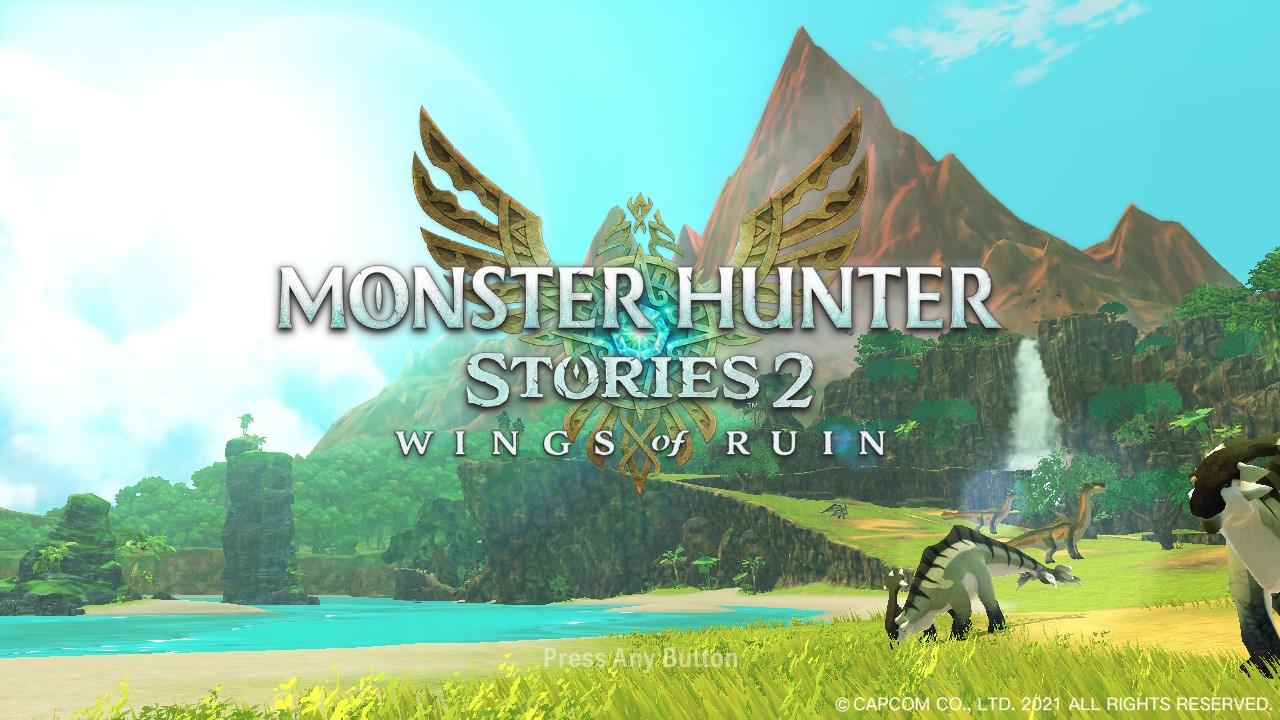 I don’t think anyone could’ve guessed Monster Hunter would be the force it eventually became. The initial games focused on the more realistic side of hunting, filled with tedious mechanics like sharpening your blade or harvesting parts, yet the larger-than-life enemies found their way into players’ hearts. Over the years Capcom has tried to use the setting for different adventures, many of which fell short, but Monster Hunter Stories is a bit different. Instead of trying to go for the marketing side of things, like the Japan-exclusive Monster Hunter Diary series, Monster Hunter Stories attempted to offer a different take on life with these creatures. It proved successful enough to get a sequel, Monster Hunter Stories 2: Wings of Ruin, but will it continue to take the spin-off in the right direction, or was the first game a fluke?

Monster Hunter Stories 2: Wings of Ruin tries to sell the promise of a grand adventure, between needed exposition and typical fantasy elements. Players control a player-created character, which includes a wide array of options and choices, who is a descendent of legendary rider, Red. Around this time rathalos, one of the most iconic monsters from the franchise, have mysteriously disappeared, with a weird girl named Ena who has a rathalos egg. As time progresses, the egg hatches with a healthy rathalos said to ruin the world. Her history, your adventure to become a rider, and uncovering the details behind the legend slowly unfold through this adventure.

Even if that is a general idea, Monster Hunter Stories 2: Wings of Ruin takes a while to build to anything greater. A lot of the story is presented with anime cliches that are obvious from a mile away. Early training levels are also rather rough, as there is a disconnect between the experience and the expectation that one would not expect from a Monster Hunter title.

Arguably one of the most applauded features in the franchise is the willingness to make gatekeeper monsters. Essentially, they exist to provide enough difficulty to force players to improve, yet Monster Hunter Stories 2: Wings of Ruin tries to teach the turn-based RPG mechanics without much of a reward for following them. This especially hurts given the simplistic combat nature.

Adapts the beloved action game to an RPG

Anyone familiar with the franchise is going to have an edge, since combat is essentially Janken/Rock, Paper, Scissors. Players have access to three types of attack, power, speed, and technical, which have distinct advantages and disadvantages. Power beats technical; that bests speed and speed beats power. Since monsters appear from a wide variety of games, understanding what they can do goes a long way.

When learning, players fight largely simplistic enemies that stick to one type of attack. If you know a boar charges, you’ll have a huge advantage. This continues for a bit until players reach diablos, think red tyrannosaurus, who yet again acts as the gatekeeper for the franchise.

Unlike previous entries, diablos are not intended to stop players from progressing and force players to grind for better gear or change their habits, instead, it’s a monster that shows how complicated combat can get.

Diablos starts by having access to all three types of attacks. From there, players can target body parts to limit potential attacks or simply get desired resources. There is also an area of effect skill, plus enough power to make players work for the win. Ultimately, this is what Monster Hunter Stories 2: Wings of Ruin is building towards. Large monsters that players need to evaluate, determine, and strike based on previous experiences and guesses. Even if it isn’t perfect, it’s a delightful way to adapt the franchise’s core mechanics to a different genre.

Players can further the experience by capturing monsters. Being a rider is more than a fancy name, it’s a term used to identify those who ride the monsters. These monsters will fight with you and have all kinds of quirks and moves that you’d expect. This is perhaps the biggest strength of Monster Hunter Stories 2: Wings of Ruin.

Previously these creatures were mindless annoyances that kept players from whatever reward they desire. Since these beasts are your companion, Monster Hunter Stories 2: Wings of Ruin attempts to humanize each monster. This can easily be seen with one of my favorite monsters in the franchise, Pukei-Pukei. The weird chameleon wyvern is known for devastating attacks with its tongue and poison. When players fill their gauge and allow them to ride said monster, new attacks appear, including a special skill unique to this model. For Pukei-Pukei, it rains poison on the enemy, but not before shielding its rider with its tongue. Each monster has these small changes that help build that relationship.

Gives the monsters we love their own personalities

Beyond giving the monsters more personality, at least in regards to players, combat has more of a high octane feel to it. Beating a monster attacking you by selecting the right move gives a nice indicator, there are super moves where you move as one and so many other things that make fights more dynamic than they should be, in addition to making Monster Hunter Stories 2: Wings of Ruin feel unique.

Outside of combat players can also somewhat explore a world. Each monster features some kind of trick, be it jumping, climbing, or screaming to scare away weak threats, making it important to make friends. As time progresses, this will also be important for later fights against some of the franchise’s most deadly creatures.

I’d say Monster Hunter Stories 2: Wings of Ruin is essentially what you want in a spin-off. At no point does it fail to feel like Monster Hunter, it just presents the core concepts and elements differently. I would prefer less hand-holding, especially when early enemies couldn’t kill you no matter how poorly you do but it eventually hits a point where you either learn, over-level, or lose.  Sure, the typical anime look and generic story might turn some people off but the core experience is there if you’re willing to invest a couple of hours for it to grow.

[Editor’s Note: Monster Hunter Stories 2: Wings of Ruin was reviewed in Nintendo Switch and a copy was provided to us for review purposes.]

Fight with many of the franchises most powerful and popular monsters

Adapts the concept to an RPG quite nicely

Gives each monster some kind of purpose, be it avoiding fights or obtaining treasure

Fights are dynamic and fascinating to look at

Story is a little bland

Takes a while to achieve the difficulty players expect

Obtaining gear is not quite as engaging as the mainline titles

Destroy All Humans! Review - The Port That No One Asked For