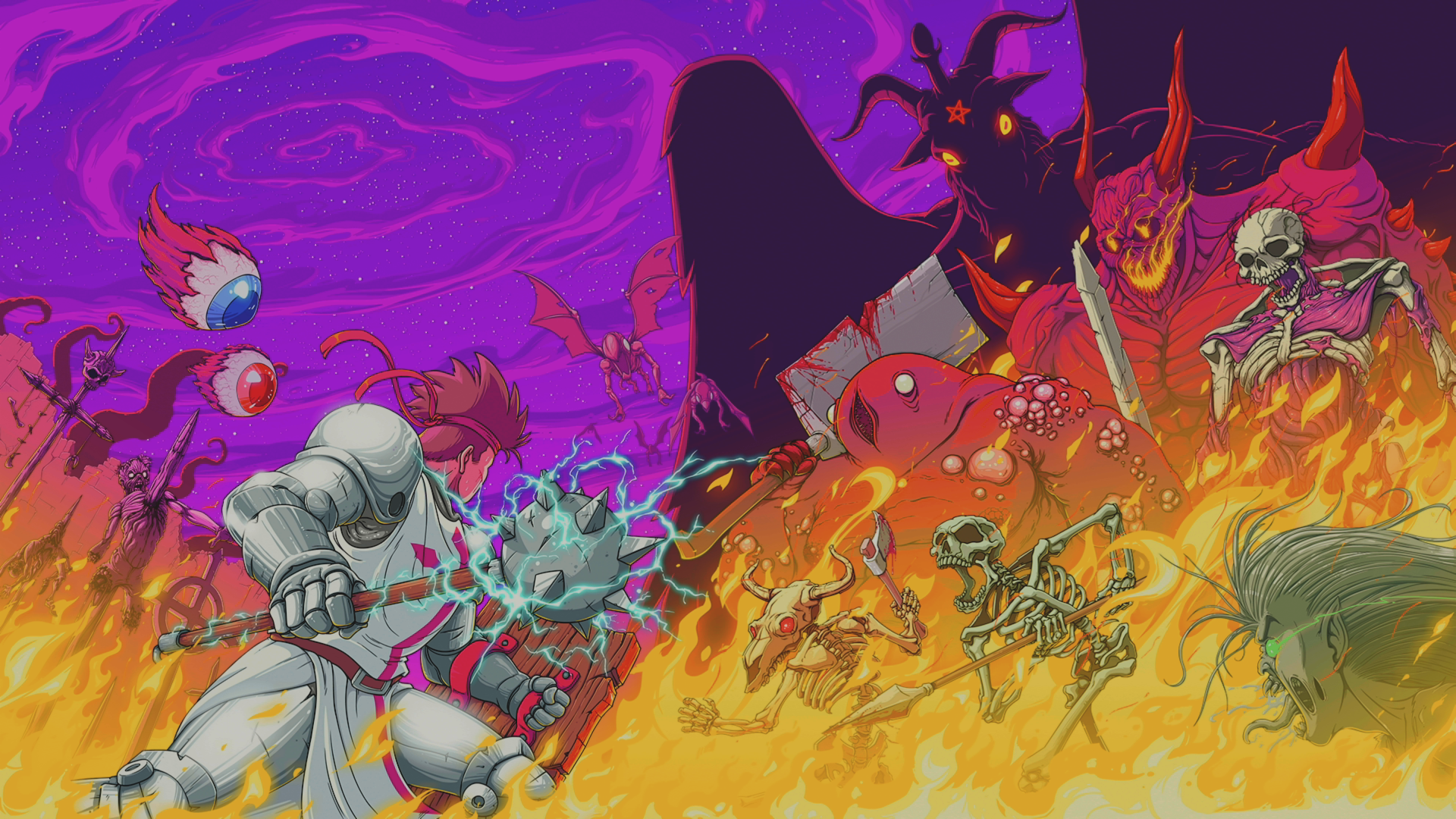 The idea of gaming is radically different from what it was 20-years-ago. In those days the main attraction was a difficulty, with the experience being locked behind various hurdles players needed to figure out. There is still a place for difficulty today, except games have other ways to reach a desirable playtime. Infernax takes a page from the past and tries to make it fun, though these experiences tend to be hit and miss. With certain struggles and an interesting base, is Infernax a must or does it fall short?

Initially, Infernax starts with a premise. You travel to the land of Upel to look into a recent increase in demon activity. Within minutes you’re confronted with a deceptively simple choice that honestly defines your journey. A cursed man calls for your character to kill him and you can either do that or try to help him. Killing him ends his suffering, but his wife notices you and that changes your alignment towards evil or you can attempt to save him, fight a boss and she will thank you now, with a follow-up quest later.

This is most of what Infernax is about. A bunch of random choices, with all but the most defining like three, being obviously good or bad. It isn’t surprising flooding a town sets you further down the path of evil, just like curing a man of his troubles is a step towards good. Really invested players will appreciate the subtle nods that become important later on. Where Infernax tends to come out ahead is the benefit of following each path.

Morally grey characters might not have an interesting adventure but those who commit to a side get a whole lot of interesting things. Bad characters for example don’t just change every interaction, you lose your mace and shield for a longsword, plus a totally unique optional story path that includes a new location and choices. Good might not get a new weapon, though there is also an optional dungeon to explore. Doing both also opens up the true end, something I’d love to spoil, but I’ll leave it with it being well worth the investment, assuming you can get there.

Where Infernax falls behind is the difficulty. It starts as a pretty hard game. Enemies do considerable damage, with rough platforming sections. Eventually, through new weapons, armor, and upgrades, there is a falling off for difficulty. Outside of the extreme post-game stuff, players go from taking two to six hits to defeat a boss to having something in the ballpark of 23. It eventually hits a point where it’s easier to heal through the damage. Why jump and dodge when standing still will also win the encounter? This is something that really stands out due to platforming increasing in difficulty.

This stems from a couple of odd choices. The first is so many of these sections have enemies that will randomly knock you off a platform to death. It doesn’t matter how many potions, health, or resources you have, falling in lava is instant death. These are pretty common, with some of the later ones relying on dodgy mechanics. The charge is the worst offender due to the dated design.

What makes charge so annoying is that it fully commits players to a specific action. Misgauging it and sliding into a wall wouldn’t be bad if you could cancel out or even use Skycall, another skill that gives more height, to avoid death but that is not the case. Where this really stands out is the double acid pit trap that appears in the dungeon after getting that ability. There is a small area that is perfect, with anything too close leading to instant death. It was a skill I avoided at all costs and just made some of these sections far harder.

Similar logic is applied to a lot of the platforming sections. It’s fine to make them tricky, it would be boring without some kind of challenge, though a lot of them will take your life, which you don’t get many and mostly in the late game, with it being likely to cause players to reset. I’ve actually failed more to platforming than everything else in Infernax combined, something that doesn’t feel satisfying when the issue is often some trivial mistake. Maybe a bullet hit you, cheap enemy spawn, really obtuse timing, and things like that.

This will, without question, frustrate some players, simply due to the inherent cheapness. Thankfully, there is a cheat code, via an in-game reference to everyone’s helper in the past, Game Genie, that trivializes it, along with an easier mode that gives more checkpoints, though how it impacts you will vary.

The Arcade Crew put a lot of love into Infernax and it shows. On the surface, it feels like someone played Castlevania and wanted to recreate that experience to the letter. However, it’s once you explore all the optional stuff that you find great secrets, like the ability to play as a reference to Ash in Army of Darkness, huge storylines, and a massive number of hidden elements. It’s all the extra stuff, and silly humor, that sells the experience. If you invest the time, Infernax is a great experience, though if you’re just looking for a single playthrough you probably won’t see what makes it special.

[Editor’s Note: Infernax was reviewed on PlayStation 5 and a copy was provided to us for review purposes.]

The humor will really stand out for some

Accessible in a way that doesn't totally ruin the experience, unless you want it to

Some of the esoteric elements are annoying

Some of the hidden elements are really obtuse

How to Get the Best Weapon in Infernax