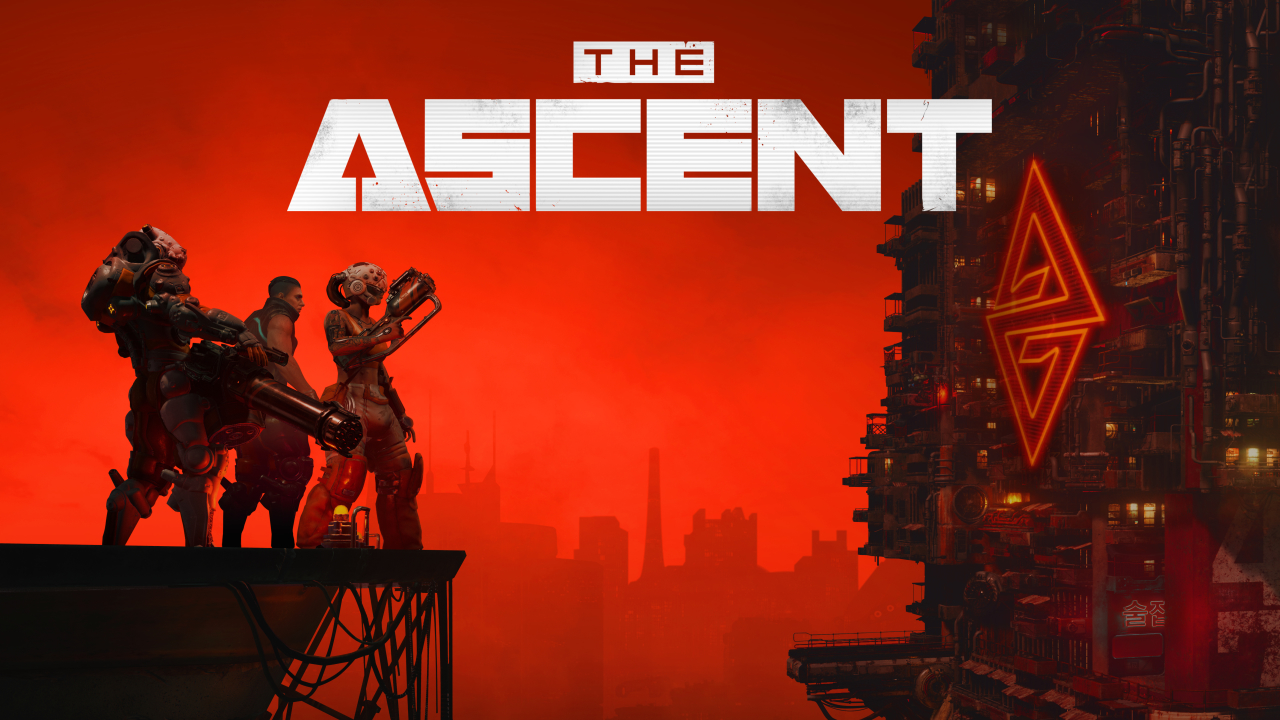 The Ascent presents a grimy, neon-drenched arcology housed on the planet Veles. All life in this multi-tiered structure is overseen by a megacorporation, The Ascent Group. But the lives of its contractually-bound citizens plummet into chaos when the all-encompassing entity suddenly and mysteriously goes under, leaving naught but disorder and a massive power vacuum for the now undirected masses inhabiting the structure.

Before we dig into the meat of this twin-stick action-RPG, we must first acknowledge that this is the first game from Neon Giant, an indie team comprised of a mere twelve people. But don’t let the number fool you; these are industry veterans whose work spans the likes of Doom, Gears of War, Wolfenstein, and more. Needless to say, this indie studio already has an impressive resume leading into their first official game.

With that said, let’s talk about the fruits of Neon Giant’s labor. The Ascent stars a customizable character who’s one of countless indentured servants called indents. With society on the brink of imploding in the wake of The Ascent Group’s shutdown, the player begins a journey through the seedy underbelly of the arcology’s lowest tier in an attempt to pair answers with the growing list of questions.

The player-controlled indent begins with little to their name; a sporty hairstyle, a basic pistol, and a tank top. It’s not much, but it’s enough to get through the small, squishy ferals scurrying around the DeepStink, the waste-filled engineering sub-level of the arcology wherein the player finds themselves. The majority of Veles’ population avoids the DeepStink, and for good reason. Other than the robots dutifully going about their tasks, there’s little else wandering the dimly light pathways except that which will tear flesh apart.

The levels above are varied and represent that status of those in each tier. The unmaintained Warrens are very different from the social spaces seen on Highstreet. I can’t help but gush about Neon Giant’s ability to meticulously craft this cyberpunk setting. Every items looks to have been placed with explicit purpose. Some of the interior areas drive this point home, with clutter spilling off of desks and congesting walkways. There’s no denying that The Ascent is a visual marvel.

When not gawking at the scenery, chances are you will be lighting it up in a hail of gunfire. The meaty, impactful gunplay really drives home the action part of this ARPG. Shotguns, hand cannons, miniguns, and more sci-fi armaments await in loot chests, enemy drops, and shops. Pulping thugs in the streets with a ballistic submachine gun is as enjoyable as shredding mechanizes foes with an energy assault rifle. Across the campaign and various side quests, I never tired of eliminating the hostile combatants standing in the way of the objective.

However, enemies don’t simply roll over and die. Enemies usually appear in groups and they can be awfully aggressive, using their mix of ranged and melee forces to overwhelm the player. Fortunately, The Ascent has many tricks up its sleeve when it comes to the finer points of combat. For starters, there is a cover system. Players can crouch behind cover to save themselves from eating a steady stream of bullets. By pulling the left trigger, the equipped weapon can be raised to fire over cover to decimate incoming adversaries safely.

The ability to raise the weapon works outside of cover, too. At any time, hipfire can be switched to finer aim, allowing those headshots to stagger those on the receiving end. Be sure to keep the height of the target in mind; ferals are small and can pass underneath the gunfire of a raise weapon. It’s a neat detail that forces the player to make quick assessments as they are laying down fire.

Even with cover and the ability to dodge, some of those bullets are going to make contact eventually. Thankfully, the ratty tank top won’t remain your sole line of defense for long. Much like weapons, armor can be found in the same places as the offensive options. There’s a wealth of aesthetically pleasing armors to sport. Sure, the list of items might pale in comparison to action-RPGs like Diablo, but the offerings are serviceable.

Given the player indent’s cybernetically-modified nature, they can take advantage of powerful augmentations. These powers come in a variety of flavors. Abilities range from a forceful punch that disintegrates everything on the receiving end to calling forth spiderbots to scuttle towards enemies with explosive intent. Mixing and matching augmentations with weapons and tactical equipment can create exciting moments of experimentation, allowing players to find their desired playstyle.

Playstyles become a bit more important once you dive into co-op. As a solo player, you must be a jack-of-all-trades, fending off the rival forces as their sole focus. When playing in co-op, which can host up to four players and comes in online and offline varities, The Ascent reaches new heights. Experiencing the bustling districts of the acrology with a friend (or three) changes the vibe as you are no longer a one-man army. The energy shifts a bit closer to something more akin to a more narrative-driven Helldivers.

Whether playing alone or with friends, there’s plenty to love about The Ascent. In fact, one of game’s biggest issues doesn’t come from its mechanics or core loop but rather from the state of its performance. On a high-end PC above the recommended settings, I still encountered many instances of massive framerate drop and hitching. The shift from Ultra to High graphics with the ray tracing options turned off definitely helped a bit. But it was far from a smooth ride, even with DLSS set to performance. Those with high refresh rate monitors will notice these jarring drops the most. At one point, I plummeted from 144fps to a measly 36fps when an explosive canister went off and wiped out a handful of enemies. So even locking my game to 60fps didn’t completely resolve the occurrence of dips. Neon Giant has built a game that punches above the weight of many indies, but that has come at the cost of optimization it seems.

Even with the performance disruptions, The Ascent kept me hooked. Exploring Veles’ arcology and its self-serving citizens is an engaging venture, especially when one of those side quests produced a dark revelation about a beverage company. Moments like that coupled with the indent’s constant elevation as a force to be reckoned with feeds the power fantasy as the once bottom-of-the-barrel thug becomes the ultimate savior or executioner.

The Ascent presents years of Neon Giant’s individual professionals’ experience and it immediately shows on a scale more common with AAA titles. From the tight, flashy gunplay to the immensely dense environments, The Ascent manages to impress on nearly every level. Intermittent performance issues can detract from the game when it’s in the midst of its engaging flow, an issue that will hopefully be remedied post-launch to align optimization with the level of polish found elsewhere in-game. All in all, The Ascent is on hell of a debut game from Neon Giant and we’re eager to see what they do next.

[Editor’s Note: The Ascent was reviewed on PC and a copy was provided to us for review purposes.]

Performance issues can be disruptive